What is emphysema and how to treat it? 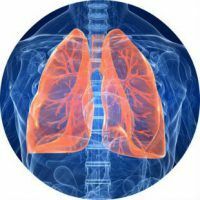 Emphysema of the lung is a chronic disease associated with damage to the alveoli, which are of a systemic nature and become an obstacle to normal breathing. To stop the disease, you must follow the rules of prevention, and in case of manifestation of one of the symptoms - immediately consult a doctor.

Emphysema of the lungs in many cases is a consequence of bronchial asthma or chronic bronchitis that has not been completely cured. Often there are signs of bullous type of emphysema after a tuberculosis or in the presence of an open-form disease. In addition, experts identify several reasons that contribute to the development of abnormal lung alveoli:

Symptoms of pulmonary emphysema include:

The intensity of these symptoms depends on the stage of the disease. For example, bullous emphysema of the lungs for a long time is manifested only by shortness of breath under heavy loads, so it is detected, as a rule, only at the last stage.
to table of contents ^

Depending on the prevalence of the process, the following forms of emphysema are distinguished:


Also, emphysema is divided into the following types:

The diagnosis of respiratory function is important in the diagnosis. To assess the stage of narrowing of the bronchi, the method of functional diagnostics is used - peakflowmetry. After a few breaths, an exhalation is carried out into the recording device-a peak meter. This method allows distinguishing emphysema from bronchitis and bronchial asthma, as well as pneumosclerosis, which are similar to it in symptomatology.

To determine the degree of lung failure and determine the change in their tidal volume, spirometry is performed. Data are recorded at a time of calm and steady breathing, then the doctor asks for several breaths and exhalations.

Special tests with bronchodilators help distinguish different lung diseases and assess the effectiveness of the treatment.

X-ray in pulmonary emphysema allows to diagnose enlarged cavities in various parts of the lungs, as well as to determine the increase in the volume of organs.

Computed tomography allows you to identify cavities in the lungs and their increased airiness.

All treatment measures are aimed at alleviating the manifestation of symptoms and reducing the progress of respiratory failure, as well as the treatment of underlying lung disease that led to the emergence of emphysema. Treatment is carried out on an outpatient basis under the supervision of a therapist and a pulmonologist. Hospitalized in a hospital only with severe form of respiratory failure, infection, as well as with the appearance of a surgical complication( pulmonary hemorrhage due to rupture of the cavity).
Read also about the popular method of treatment of respiratory diseases by inhalation with saline and other drugs http://woman-l.ru/ingalyacii-fizrastvorom-dlya-vzroslyx-i-detej/
back to contents ^

To prevent the appearance and exacerbation of emphysema, it is recommended:

The causes of congenital( lobar) emphysema in children are genetic pathologies of development, p2-macroglobulin deficiency, a1-antitrypsin, estrogen and androgen disturbance, smoking, and work with women's chemicals during pregnancy.

Interstitial emphysema often affects newborns and infants, the disease develops with a long cry, a strong cough, and endotracheal anesthesia. The disease can be complicated by pneumothorax, as a result of which the child has cyanosis, severe dyspnea, muffled heart sounds and a decrease in blood pressure. Sometimes there is a development of pneumopericardium and inevomediastinum with compression of the vessels and signs of tamponade of the heart muscle.

Treatment of emphysema in a child depending on its course is:

In addition, the child undergoes procedures for enriching the lungs with oxygen and prescribed therapeutic exercises, with which you can control the air volume in the body.

Emphysema of the lungs is constantly progressing even with active treatment, therefore it is impossible to completely cure the disease. With timely access to specialists and observance of prescribed treatment measures, the disease can "slow down", thereby improving the quality of life and delaying disability. In the presence of emphysema on the background of a congenital pathology of the enzyme system, the prognosis is usually unfavorable.
to the table of contents ^

Treatment of emphysema at home can be done only with the permission of the attending physician. For this it is recommended: