Causes and symptoms of diseases of the inner ear 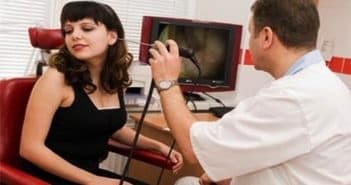 Diseases of the inner ear - the most common pathology of the auditory organs. All diseases of the internal system of hearing have similar symptoms, and the most serious complication of them is the acquisition of absolute hearing loss.

In order to prevent such a sad turn of events, it is necessary to know what symptoms these diseases have, what is their cause, and what methods allow the pathology of the inner ear to be cured most quickly and efficiently. Let's consider all these issues in detail in the article.

Internal ear diseases have very serious consequences: total deafness is one of these. If we talk about the location of the inner ear, then it is at the very end of the auditory system - this is its extreme internal department. Because of an extremely complex and intricate structure, the inner ear is sometimes also called a labyrinth. Consider the pathologies that most often affect the inner ear.

This disease affects the inner ear most often. Labyrinthitis is an inflammation that occurs as a result of the penetration of pathogens into the depths of the auditory organs. The common cause of this disease is the otitis media of the middle ear. 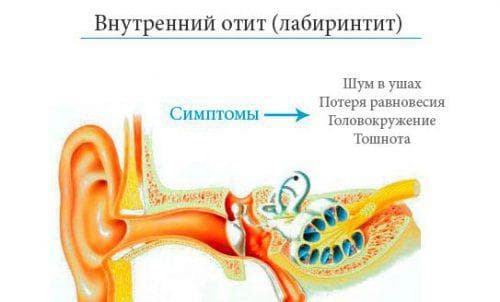 Sometimes, as a result of the penetration of a large number of microbes, and in the absence of treatment, an extensive purulent infection develops due to internal otitis media. This infection can lead even to the inflammation of the meninges, the so-called meningitis. This disease often causes complete deafness, especially if it has occurred in a child.

Labyrinthitis may also occur due to mechanical damage or injury. For example, a woman may accidentally poke a hairpin in her ear, causing infection. And children often put in their ears a foreign body, which also causes an inflammatory process.

With limited labyrinthitis, the infection does not go beyond the inner ear, But when it is spilled, it covers all the "back streets" of the internal auditory organs, and often leads to complete deafness. In addition, the labyrinthite is serous and purulent.

The serous type of the disease has a milder character, and severe complications rarely occur. But the purulent species leads to the reproduction of bacteria in the inner ear and inflammatory process. This suppuration can completely destroy the auditory receptors and the snail responsible for the sensitivity of the auditory perception.

But what and how to drip, when blown an ear, is described in this article.

It will also be interesting to know whether it is possible to warm the ear with medium otitis or not.

What first aid is needed, when the child has an earache, and what should be used first, is described in this article: http: //prolor.ru/u/ detskoe-zdorove-u / bol-v-ushax-u-rebenka-pervaya-pomoshh.html

What causes that itches and hurts the ear inside, and what means should be used in the first place, is described in this article.

In this case, the defeat of the inner ear leads to problems with coordination of movements, balance. In addition, Meniere's disease leads to frequent dizziness and problems with auditory perception. The immediate cause of the disease is that the inner ear receives fluid from the endolymphatic channel of the vestibular apparatus. 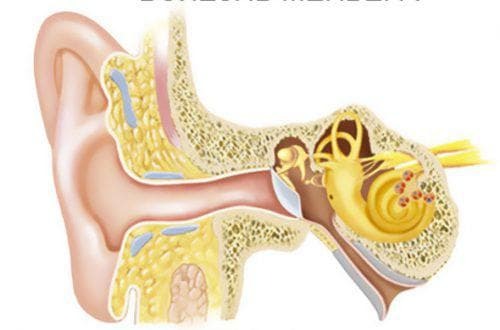 Meniere's disease is more common in people with inflammatory infections in the middle ear, after traumatic brain injury of varying severity. Infections of the upper respiratory tract also sometimes give rise to this disease. Provocators of Ménière's disease are the following:

Too abundant consumption of coffee and salty foods can also provoke the development of the disease.

In this case, the pathologies of the inner ear are associated with various mechanical deformities, among which:

This type of pathology has been present in humans since childhood. It leads to a complete or partial impossibility of auditory perception. Sometimes medical timely intervention is able to destroy the problem, interfering with hearing, and sometimes - and no. If, for example, the ear does not develop a snail or lacks a corti's organ, the hearing will not be restored.

These tumors include tumors( including oncological ones), epithelial tissue, polyps. 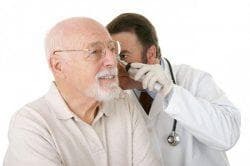 In simple terms, this is a hearing loss that is the result of some disease of the internal auditory organs. The disease-cause in this case has touched the auditory nerve or receptors, and therefore there was a decrease in auditory perception.

This disease leads to abnormal growth of bone tissue in the inner ear, which leads to complete blocking of the hearing organs and, as a consequence, to deafness.

If, as a result of an infectious disease( including a catarrhal disease), microbes enter the vestibular apparatus, a person begins to experience noticeable problems with coordination of movements. 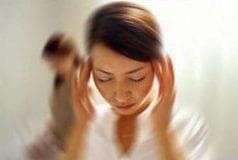 This type of pathology is characterized by frequent dizziness, and the gait becomes staggering.

What factors provoke the development of internal ear pathologies.

Birth defects. These can be:

Birth injuries can also be attributed to congenital pathologies.

Sometimes craniocerebral traumas also provoke the development of diseases of the inner ear. A foreign body stuck in the ear canal, too, can cause an inflammatory process. This happens more often in children.

Infectious diseases is the most common factor provoking the pathology of the inner ear. In addition to common otitis and colds of viral and bacterial infections, this category can also include typhoid, mastoiditis, tuberculosis, meningitis and other diseases.

Loud noise .Heavy acoustic effects can also cause pathologies of the labyrinth. As a result of this influence, there is a rapid wear of the auditory receptors.

In addition to the above, neural pathology, vascular disease, and cervical osteochondrosis, and even life in a state of permanent stress, affect the occurrence of ear pathologies.

With internal otitis patients often complain of dizziness, sometimes they also experience ear pain, noise. Often the labyrinth also leads to imbalance. In addition, a decrease in the level of auditory perception also often accompanies this disease. The most pronounced symptoms are when a person shakes his head sharply.

There may be pain in the temples that give to the back of the head, or in the half of the head where the temple is located.

General weakness and severe malaise are also inherent in these diseases. 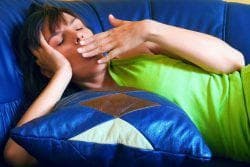 Frequent dizziness, as well as impaired coordination of movements. Sometimes dizziness can lead to nausea and vomiting.

High temperature is a possible, but not mandatory, sign of diseases of the inner ear.

Noises are heard in the ears, a general decrease in the level of auditory perception is noticeable.

Pathways of infection and diagnosis

In the inner ear pathological microbes fall in three ways:

To accurately diagnose, it is necessary to undergo the following types of examinations:

We learn how to treat the diseases of the inner ear.

First of all it should be noted that not all, unfortunately, the disease in this case can be cured. If, for example, the death of the auditory receptors or corti has occurred, the organ has healed, and there is no way to restore the hearing at all. In severe cases, hearing aid is sometimes saved. 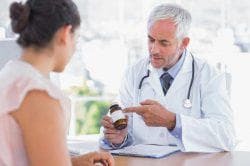 To treat many pathologies of the inner ear, one must resort to stimulant medications of neurological processes, as well as the vascular system. Concrete treatment is always appointed by the doctor according to the results of preliminary diagnosis and thorough examination.

This type of medical care is used when it is necessary to eliminate symptoms of suppuration: it is necessary to open the inner ear, carry out its sanitation, purification. In addition, sometimes surgical intervention is performed to restore deformed organs or to install implants.

These procedures help to repair damaged tissues, promote their healing. The best effect of the procedure is when they are combined with the introduction of drugs into the ear canals.

In addition to the above, a considerable benefit can be provided by special exercises aimed at restoring balance, as well as various breathing techniques.

And here's how the cork in the ears is treated with hydrogen peroxide, and how effective it is is described in this article.

It will also be interesting to learn how to drop the drops into your ear yourself.

You may also be interested in knowing why pain occurs when dripping drops into the ear.

And here's how to properly dig in the Kandibiotic in your ear, and how effective it is will help you understand this information.

It will also be interesting to know how and how to cure dry rhinitis in the nose.

What measures can be taken to avoid problems with the inner ear.

The best measure to prevent problems with internal auditory organs is to treat all diseases of the middle and outer ear in time. If there is no disease of more closely located organs, then the infection in the inner ear will not penetrate.

It is necessary to increase the overall immunity of the whole organism. With good health, no catarrhal disease can lead to serious complications. 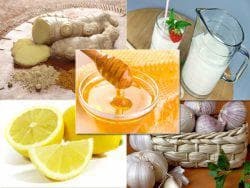 Proper nutrition and a healthy lifestyle are indispensable signs of good health. It is best to quit smoking, frequent use of alcohol also seriously weakens the body.

For prevention of diseases of the inner ear it is important to observe and, so-called, auditory hygiene. This means that you must avoid loud music, various sharp loud sounds.

We examined the diseases of the inner ear. The main danger of all these pathologies is that they can lead to complete deafness. Therefore, it is important not to start treatment of any problems with hearing organs: all infectious and inflammatory processes must be stopped in time so that the microbes do not penetrate into the far corners - into the inner ear. Pay close attention to the symptoms of ear problems: pain, discharge from the ear canals, stuffiness. A timely call to a doctor will help avoid problems with the auditory organs, and will retain the ability to hear.