What is dangerous varicose dermatitis and how to cure it 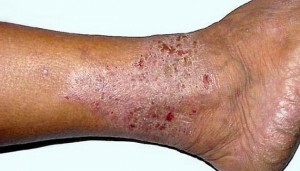 The disease is characterized by oozing reddish or scaly areas, repeated minor bleeding, and then - atrophy or, conversely, skin hypertrophy, warty growths.

Against the background of what is the development of the disease

Varicose dermatitis affects almost a third of adultspeople of working age. Moreover, this diagnosis is often the same for both men and women. 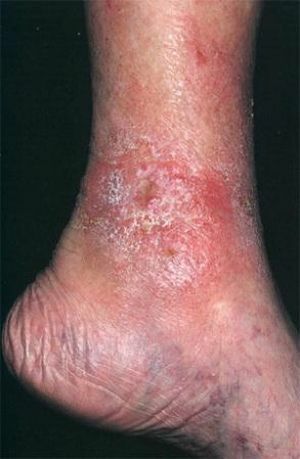 In the picture, varicose dermatitis of the lower extremities

The main cause of the disease is the violation of blood circulation and nourishment of the skin of the legs. In connection with the violation of the order of blood flow and insufficiency of the valves, the skin receives inadequate nutrition, becomes thin and dry. Most often, varicose dermatitis occurs in people suffering from inflammation of varicose veins.

If the limb is affected by chronic venous insufficiency, the skin on it is damaged with all the ensuing consequences, including, with a violation of the protective barrier.

This creates all conditions for the possibility of developing varicose dermatitis. Another very important incentive for the formation of the disease are leg wounds, limb ulcers associated with severe chronic venous insufficiency.

Also, medications used for topical therapy can lead to increased sensitivity of the skin.

Varicose dermatitis has the characteristic symptoms:

Symptomatic of the disease depends on severity:

Currently, there are no specific diagnostic methods, as well as common signs or symptoms that can be used to detect this disease. The diagnosis is based on anamnesis and physical examination. 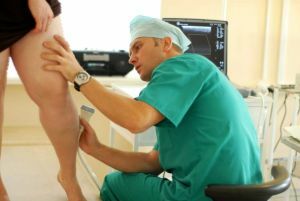 Each patient has a unique set of symptoms and severity of the disease, in addition, signs can change over time.

A medical examination is required to establish the diagnosis. Sometimes there is a need for additional laboratory tests to confirm the diagnosis, and a comparative analysis of symptoms.

In case of symptoms of an allergic reaction, a skin allergy test is performed that can determine the means of daily use that allergens can be.

Treatment of varicose dermatitis of the lower extremities is aimed at improving blood circulation, moisturizing and softening the skin surface and removing inflammation and swelling.

The most popular therapies:

It is necessary to prevent drying out of the skin and the appearance of ulcers. It is carried out by applying to the affected areas special creams available in the pharmacy. But remember that the use of certain creams and ointments requires a preliminary consultation with a doctor in order to prevent the occurrence of allergies.

Special moisturizers reduce the outflow of water from the skin and prevent the penetration of the infection by forming a protective film on its surface.

Treatment of varicose dermatitis with steroid ointments, as a rule, have a good effect. However, do not use these drugs without consulting a specialist in order to prevent allergic reactions.

Special clothing designed to maintain optimal blood circulation. Therapeutic underwear should be worn throughout the day, 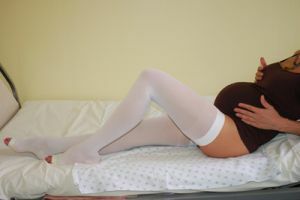 should only be taken off during bathing.

During rest, it is better to keep your legs slightly elevated.

This prevents the accumulation of fluid and, consequently, the occurrence of edemas.

In addition, in the absence of sore wounds, the doctor may recommend a special bandage moistened with zinc oxide.

This method is used in the most severe forms of dermatitis, when other drugs do not help. Before its application, the main problem and general condition of the venous system is determined by ultrasound.

As alternative methods, the most popular and showing the maximum effect in the treatment of varicose dermatitis are herbal preparations and the treatment with leeches.

The second method has antithrombotic, analgesic effect, and is used at all stages of the disease. In addition, you can make compresses from the leaves of cabbage, which are applied to the affected area for the whole night. 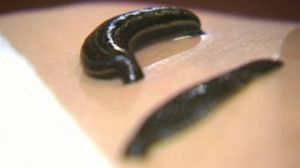 This method of alternative treatment has been known since ancient times. Varicose dermatitis and other skin lesions that lead to the formation of cracks and ulcers, are treated on the basis of the special properties of saliva leech.

It has a bactericidal and anti-inflammatory effect, has a mild analgesic effect.

Treatment of varicose dermatitis with folk remedies is possible using the following recipes:

Since the disease is characterized by dry skin, it is often possible to bring pleasant relief to the use of vegetable oils, in combination with herbs. Means based on animal fats( eg emu oil) can also be used.

For the prevention of

In this case, it is not a complication of the disease itself, but complications arising in the case of uncontrolled self-medication.

Self-medication, regardless of the form of violation of the venous system, is absolutely contraindicated! 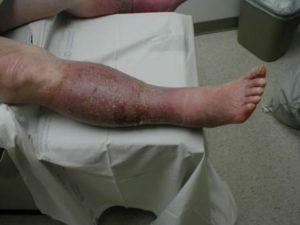 Doctors are not unambiguous in their opinion regarding the treatment of venous dermatitis by unconventional methods, they do not object categorically against it, but be careful - all these processes should only become the basis for further or maintenance therapy.

Often the consequences of self-treatment lead to permanent disability. All methods of treatment in this case, as with any other diagnosis, should recommend an expert. Without fail, before using folk remedies, consult a dermatologist!

Modern medicine does not rule out the advisability of using, within the treatment of venous dermatitis, methods and recipes tested for many centuries. But, comparing the average life expectancy of a modern person and an ancestor who lived 100 years ago, it is hardly possible to deny its achievements.