How to take Clostilbegit to stimulate ovulation 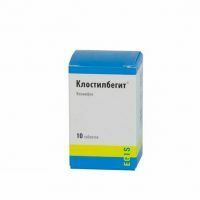 Clostilbegit is a medical preparation based on synthetic non-steroid estrogen, which stimulates the process of ovulation in a woman. Initially, this medicine was created for contraception, but since 1967 it was used to induce ovulation. The drug has a number of side effects and restrictions on use, so before applying Klostilbegit, you need to go through a full medical examination and get a specialist opinion.

Clostilbegit is considered a very strong preparation of the gynecological group belonging to the group of antiestrogens. Its active ingredient is clomiphene citrate. Even in a small dosage, the drug significantly enhances the secretion of gonadotropins, which is effective for stimulating ovulation in the female and suppressing androgen deficiency and oligospermia in men.

Klostilbegit is an artificially created non-steroidal estrogen similar to that produced by the female body. It occupies estrogen receptors for several weeks, in contrast to estradiol, which does this only a few hours, which explains the effectiveness of stimulation.

After administration, Klostilbegit is well adsorbed, metabolized in the liver and excreted through the intestine within a week. Thus, it indirectly stimulates ovulation in women, while activating a physiologically normal menstrual cycle.

Stimulation of ovulation by hormonal drugs is performed only if the gynecologist diagnoses "no own ovulation," and the woman does not have to restore her own ovulation. This drug artificially provokes the possibility of fertilization for a certain period, for which it is possible to have time to get pregnant.

Treatment with such drugs is made only after a comprehensive examination. Particular attention is paid to finding the cause of the violation of natural ovulation, which can be, for example, in the abnormal level of thyroid hormones, adrenals, etc. In some cases, the alignment of hormonal failure resumes the correct processes in the female body, and conception can occur without stimulation.

Scheme of reception of

There are several schemes of stimulation by Klostilbegit, the choice of which is performed by the doctor on the basis of the diagnosed diagnosis.

Stimulation Clostilbegitom according to the first scheme should be performed within 5 days of 50 mg per day with direct clinical control or laboratory testing. In this case, ovulation should begin on the 11-15th day of the cycle, but if this does not happen, then you need to go to the second scheme.

In the second course, the dose increases: from 5 days of the next cycle, 100 mg per day for 5 days. If after that the expected ovulation does not come, then the circuit is applied one more cycle.

After another failure, it is best to stop taking the drug for 3 months. After this time, treatment begins with the first scheme. If after 2 courses of treatment on both schemes the drug did not give any results, then the subsequent treatment is inappropriate and ineffective for them.

Do not exceed the dose prescribed by the treating doctor in order to achieve the desired goal. The total dose of the drug for one course should not exceed 750 mg.

If a woman has polycystic ovary, then treatment should begin with 50 mg per day, since there is a possibility of hyperstimulation.

In the absence of menstruation due to long-term use of contraceptives, you need to undergo a five-day course of treatment with Klostilbegit 50 mg per day. Usually this course gives results after the first attempt.

Read also about how the procedure of one of the simplest and most accessible kinds of assisted reproductive technologies - artificial insemination is carried out http://woman-l.ru/kak-proxodit-procedura-iskusstvennoj-inseminacii/
to the table of contents ^

An overdose of the drug may cause:

All these symptoms pass after discontinuation of drug treatment.

In the instructions for using Clostilbegit, there are recommendations not to use it more than 5-6 times in life, as abuse can lead to early menopause, exhaustion, hyperstimulation or rupture of the ovaries, hormonal disorders, ovarian cyst, etc.
to the table of contents ^

The drug is also prescribed for men with a poor spermogram( in the case of androgen deficiency or oligospermia).Treatment is carried out for 6 weeks at 50 mg 1-2 times a day with systematic monitoring of spermogram.

Clostilbegite and alcohol are incompatible, since the therapeutic effect of the drug in the presence of alcohol in the blood practically reduces to zero. Moreover, joint application increases the likelihood of aggravation of the side effects of the drug: the degree of allergic reactions is increased, vomiting, nausea, deep depressive states are provoked, psychological depression, unfounded irritability appear.


Alcohol-containing substances, getting together with Klostilbegit in the blood, can lead to toxic poisoning, which entails various abnormalities of the abdominal organs.