How to take Afobazol in tablets 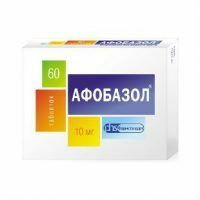 Afobazol is a light daytime tranquilizer, which has an anti-anxiety( calming) and at the same time a slight stimulating effect on the body. Moreover, the drug does not cause physical and mental dependence, so after the course of treatment, they do not have withdrawal syndrome. It can be purchased at a pharmacy without a prescription, however, before taking Afobazol, it is advisable to get a specialist consultation.

Composition and effect of

The active substance of Afobazole is fabomotisol. This is a selective anxiolytic, which has an anti-anxiety effect without a sedative and hypnotic effect. It lacks muscle relaxant properties, a negative effect on the indicators of attention and memory. The drug improves the coordination of movements and sensorimotor response, as well as short-term visual memory and attention, which makes it possible to use fabomotisol to persons whose professional activity requires a fast motor and mental reaction.

Afobazol is used to treat anxiety conditions of a functional nature that does not have a pronounced antipsychotic effect. Its main advantage over other similar medicines is an easy stimulating effect that fights against the typical consequences of taking tranquilizers: drowsiness, inhibition of reaction and decreased concentration of attention. For this reason, he is referred to a group of "daytime" drugs, after taking it for the night a person can not fall asleep.

The main effects of Afobazole:

Another major feature of the drug is that it does not enhance the effect of other psychotropic drugs and alcohol, but it can increase the effect of some other tranquilizers and anticonvulsants( eg, carbamazepine and diazepam).
to contents ^

The drug is indicated for use, first of all, to people who are not self-confident, too emotional and with anxious-hypochondriacal traits of character. Afobazol relieves symptoms such as tension, anxiety, irritation, a sense of permanent danger, depression, and also allows a person to concentrate all the forces at work and adapt to the team. Moreover, the drug is actively used in somatic diseases and conditions( irritable bowel syndrome, arrhythmia, systemic lupus erythematosus, premenstrual syndrome, climacteric syndrome, neurocirculatory dystonia, alcohol withdrawal syndrome, bronchial asthma), oncological, dermatological and other diseases.

Since the drug has an effect on the work of internal organs, it is widely used for various diseases of the respiratory system, cardiovascular system and gastrointestinal tract as part of complex therapy.

Afobazol appoint 1 tablet( 10 mg) inside half an hour after meals 3 times a day. The standard course of treatment lasts from 2 weeks to a month, but in some cases, the course duration and dosage of Afobazol can be increased to 60 mg per day and 3 months of treatment.

The therapeutic effect is noticeably developing after a week of taking the drug, but the full effect is only a month later. After this course of treatment, the effect persists for 1-2 weeks. After taking the drug inside, it is distributed to organs with blood circulation, and is completely eliminated from the body within 2 hours.


Read also about how to make a strong sleeping pills on your own at home http://woman-l.ru/recepty-snotvornogo-v-domashnix-usloviyax/
back to contents ^

Allergic reactions to componentsdrug, rarely a headache that passes by itself and does not require discontinuation of the drug.

Overdose Afobazol manifests itself in the form of drowsiness and pronounced sedation, without relaxation of the musculature.

Children under 18 years of age are not allowed to take Afobazol.

When pregnant and breastfeeding

Afobazol is contraindicated during pregnancy and lactation.

Often a hangover is accompanied by various depressive states and minor mental disorders, in which case Afobazol can be taken to relieve hangover.

If we talk about the compatibility of Afobazol and spirits, the drug does not enhance the effect of alcohol and does not cause poisoning. However, if you consider that alcohol inhibits the central nervous system, and Afobazol - activates, then the positive effect of therapy with this drug can be significantly reduced or completely destroyed.
to table of contents ^

In the group of drugs that help to remove anxiety and nervous disorders, there are a large number of medications, for example, Tenoten, Adaptol, Phenibut, Phenazepam, etc. However, as a substitute for Afobazol, they can only be used after a doctor's prior consultation.