Application of herb bitter wormwood in recipes of traditional medicine 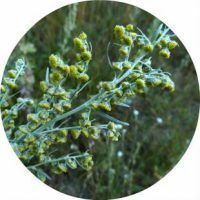 Artemisia bitter from the family of Compositae, refers to perennial plants. It has a very specific smell, a bitter taste. The plant is poisonous enough and is not eaten by animals. The stem is branched and colored in a dark purple color. Leaves pinnately dissected. On top of the leaves are painted in a dark green color, and from below have a light color. The flowers are small, yellow, tubular, collected in baskets. In height, the plant reaches 2 meters and grows well in almost all regions of our country. Flowering is celebrated from July to August. There are about 400 species, of which 170 grow on the territory of Russia and Ukraine. 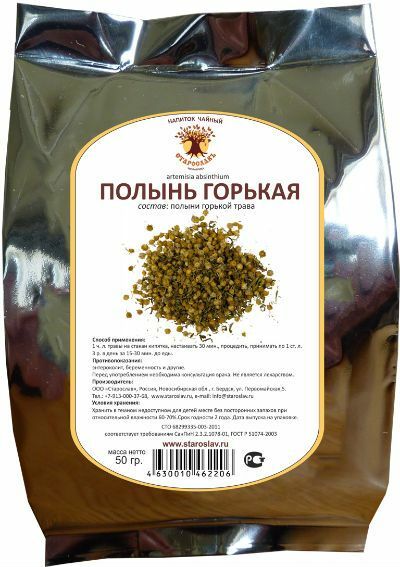 wormwood The composition includes an essential oil, which contains terpenoids, tannins, flavonoids, glycosides, and various acids, including ascorbic. Thujone, which is a part of the plant, is poisonous, so preparations made from wormwood can be poisoned if you do not comply with the rules of admission. The chemical composition of the plant strongly depends on the place of growth.

Wormwood has a pronounced anti-inflammatory effect. Tinctures of wormwood wormwood perfectly cope with digestive disorders, has a stimulating effect on the secretion of gastric juice, promote the development of enzymes of the pancreas and bile. Effective wormwood in the treatment of liver diseases. The plant is able to increase the overall tone of the body, providing cardiostimulating effect. It is also used as a lotion, mouthwash for suppuration, ulcers, with bruises. Well proven in the fight against helminths, other parasites, fungi and viruses.

The area of ​​application of wormwood is quite diverse:

Depending on the disease, there are also recipes for the preparation of tinctures, decoctions of bitter wormwood.

Collected wormwood in May, pour into a liter container, so that it fills it completely, but it was not rammed, pour medicine alcohol diluted with water( 50:50) or 40-degree vodka, but it does not need to be planted. Insist 20 days in a dark place. Take before eating - 1 drop per 1 tablespoon of water. Duration of treatment is 20 days.

A glass of boiling water is poured into a tablespoon of herbs. Within 5 minutes, boil and insist for 1 hour, after which filter. A clean towel is moistened with infusion, squeezed and wrapped around the head before going to bed.

Pain in the stomach

A teaspoon of herbs should be crushed into dust and poured with steep boiling water( 200 grams).Infuse 1/4 hours, strain through gauze or sieve. Drink in 3 sets for 1.5 hours before eating.

Learn also about the application in folk medicine of wintergreen round-faced http://woman-l.ru/ispolzovanie-grushanki-v-medicine/
to the table of contents ^

A teaspoon of herbs is poured with 2 cups of boiling water, insist and filter. Take half an hour before meals three times a day.

Seeds should be grinded until the powder is formed and taken on a teaspoon 3 times a day.

Hemorrhages in the eyes

In two layers of gauze wrap a teaspoon of unmilled grass. They dipped in boiling water. Give a little cool and put on a problem eye. The procedure is repeated several times a day. Treatment lasts until the problem is resolved.

Apply a decoction: 4 grams of wormwood, 16 grams of thyme and half a liter of water. Boil 10 minutes, raw materials squeeze out, volume to bring to half. Drink broth for 1/3 cup 3 times a day. Treatment lasts 30 days.

When the organism is infected with pinworms, the use of drugs based on wormwood inside, in conjunction with garlic-wormwood enemas, is shown. When making the enema solution, the garlic is poured with boiling water and kept for 20 minutes in a water bath, mixed with a decoction( 2 crushed denticles per 0.5 liters of water, plus 100 grams of wormwood decoction, for which it is necessary to boil half a teaspoon on a glass for 10 minutes at low temperatures).Enemas are put every day. Course - 7-10 days. The volume of the enema is up to 600 grams for an adult and up to 300 grams for a child aged 8 to 12 years. The solution is introduced for 5-10 minutes. For children, the decoction of wormwood should be half as weak.

Freshly harvested grass is ground and applied to the site of injury. The grass is changed and moistened with water to avoid drying out.

Pour 0.5-1 kg of grass with a bucket of water and cook for 1/4 hours. Insist until the final cooling. The infusion is poured into the bath and taken for 20 minutes. The course consists of 10-12 procedures. You can repeat it after a week break.

The best method of treatment is douching. To do this, prepare the infusion in the main way - a teaspoon of steep boiling water, the infusion time is 15-20 minutes. Washed in the evening, for 14 days.

With dysmenorrhea, apply the broth inside, twice daily in a tablespoon. Duration of the course is 2 weeks.

With oncology and cancer

A broth is prepared: a tablespoon of dried root is poured into a glass of boiling water. Brew for 15 minutes with the lid closed. Decoction is divided into 3 doses and drink 15 minutes before meals. Treatment lasts for 14 days.

A teaspoon of raw material is poured with boiling water( 200 grams) and it is insisted for 2 hours. Is taken internally.

This disease is caused by infusion: a teaspoon of raw 500 grams of steep boiling water. Infuse under the closed lid for 1-2 hours. Drink during the day. The course is a week, after which you need to make a week break.

A glass of white wine is poured into a tablespoon of wormwood root. The day is kept in a dark place. Strain and take on an empty stomach in a volume of 30-50 grams. Raw materials are stored in the refrigerator. The course of treatment is 10-15 days, after which a break for 5-10 days is done.

To connect 1 part of wormwood, valerian root, trefoil leaves, ayr root and two parts of the string, elderberry and white mulberry leaves. A tablespoon of collection pour 200 milliliters of boiling water, cover and heat for 10 minutes. After cooling, drain. Infusion diluted with water to the original volume and drink half the glass 20 minutes before meals, in the morning, at lunch and in the evening.

Fill 0.5 grams of wormwood powder with cold water. Filter and take during the day in small portions.

It is forbidden to use drugs from wormwood or on its basis to pregnant and lactating women.
It is dangerous to use such drugs for anemia.
Because of the strong stimulating effect on the glands of the digestive tract, wormwood is contraindicated in gastritis and gastric ulcer.
When allergic to plants from the family of astroves, application is also prohibited.
Prolonged courses can cause hallucinations and disorders in the nervous system.

Procurement and storage of

Before the flowering phase, the leaves of the plant are cut closer to the root, and the upper part is cut off during the flowering phase. This method of collection allows you to collect the most saturated raw materials. The ideal time for the assembly is the period from July to August. When assembling, use scissors or a knife. Plants are cut off neatly, in no case pull out together with the root.

After assembly, the raw materials must be cleaned from foreign impurities and dried in the shade. For this purpose, a loft or an oven is good, it is dried at 50 degrees. This will remove unnecessary moisture slowly, without damaging the raw materials. When properly dried, plants are stored for up to 2 years in a dry place.

When harvesting roots, rhizomes are excavated in autumn( September-October), washed, cut into small pieces and dried in an oven or special dryers at 45-50 degrees. Store in cardboard boxes, glass containers or in wooden containers.