Practical advice on how to wean a child from breastfeeding 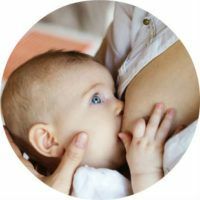 Breast milk is the most "right" and balanced food for a baby, which is always "at hand".Nevertheless, the moment of completion of breastfeeding sooner or later comes. As the famous doctor Komarovsky says: "Up to 3 months to breastfeed - it is necessary, up to six months - preferably, and then - if possible".It is very important that the decision to terminate breastfeeding be carefully considered, weighed and rigid, taken by one-on-one mom, and not "imposed" by people from the side.

After deciding that breastfeeding is time to end, a woman should choose the way she will be usedcomplete this process. There are several "scenarios" aimed at weaning the baby from the chest, each of which has its pros and cons.

The most painless, most humane and best way to wean a child from breastfeeding. But, at the same time, the longest. It is intended for toddlers who already fully eat "adult" food, and to the breast are applied only before going to bed and after awakening.

The so-called preparatory stage consists in the timely and correct introduction of complementary foods, which in the end, replaces all daily portions of mother's milk.

In order to "clean" the remaining feedings, it is important to follow certain rules.


It's hard to say how quickly the child "breaks" of breastfeeding. All children are different, and the end result depends on several factors: the temperament of the baby, the firmness of the mother and the level of their closeness to each other.

During the period of weaning, a woman must necessarily monitor the condition of her breasts to prevent the appearance of seals, stagnation or even mastitis. To this end, it is necessary to express the breast "before relief" first several times a day, then - 1 time, a little later - every 2-3 days until the process of milk production comes to naught and there are no sensations in the breastdiscomfort.

A similar method was used by our grandmothers, and they considered it to be the only correct one. About to separate the child from breastfeeding gradually, there was not even a question.

The essence of it is that when "it's time" to finish breastfeeding, the mother leaves, leaving the baby with his grandmother, aunt, dad or other non-nervous relatives. She tightly wraps her breasts with bandages or a dense cloth, so that the milk "burns out."


Of course, this method takes place, especially in really emergency situations. But, nevertheless, it is important to understand and its negative side, which entails:

How and when to teach a child to walk on a pot http://woman-l.ru/kak-priuchat-rebenka-k-gorshku/
to the table of contents ^

The aim of the method is to push the baby to the fact that he no longerwanted to take a breast. To do this, the nipples are greased with greenery, red lipstick, mustard, wormwood tincture. At the same time, the mother can explain to the baby that her breast hurts and now she can not feed him.

It should be noted that this method is very contradictory and has a lot of flaws: the crumb can not only be frightened, but also lose confidence in his mother, who was good and "tasty" yesterday, but today she suddenly became a stranger and "bitter".In addition, the means for spreading can adversely affect the health of the baby, often becoming the cause of allergic reactions.

If it is necessary to urgently complete lactation, it is possible to use medicines. The question of their application is solved exclusively with a doctor who is fully aware of the state of health of the nursing mother, the course of pregnancy and the process of childbirth. In no case should you "prescribe" yourself such medicines yourself!

Depending on the situation and the state of health, the doctor may be recommended drugs that are directed:

This method is a "facilitated version" of medication, so before using it, it is also good to get a doctor's advice and to study contraindications.

It is known that there are plants that adversely affect the production of milk. These include mint, St. John's wort, sage, cowberry, basil, parsley. Apply the data of the herb in the form of infusion: a tablespoon is poured with boiling water, infused, filtered and taken according to the instructions on the package( or better - the doctor's recommendations).

In addition, during the period of breastfeeding, you should reduce the consumption of warm liquid, nuts, seeds, dates, milk and other products that stimulate lactation.
to the table of contents ^