Chrysoprase stone and its properties 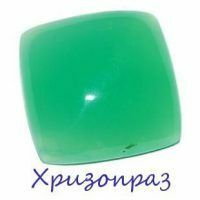 A happy stone, an amulet of luck and victories - so chrysoprase for its unique properties was called in the ancient world. Because of its unusually deep green color, chrysoprase is sometimes confused with the emerald itself. Particularly beautiful stone looks in the frame of gold and silver.

He was particularly revered in ancient Rome, Egypt and ancient Greece, whose inhabitants believed that chrysoprase is a symbol of success. Not without reason, as the strongest amulet of victory, this stone was used by the famous commander Alexander the Great, who preferred chrysoprase to other stones and always wore it on his belt. Honored chrysoprase and rulers of later times.

So, the favorite ornament of Prussian King Frederick II, which he always wore on his finger, was a ring with chrysoprase. By the order of the same ruler, his royal crown was decorated with chrysoprase, for which the jewelers applied a new kind of facet-cut stone, later called "Friederian".The essence of this cut is framed with small facets of a flat stone table.

Chrysoprase has been used since ancient times and as an ornamental stone. Figurines from chrysoprase, amulets, cameos and stone-cutting miniatures( gems ​​and intaglio) can be seen in the performance of ancient Greek and Egyptian masters. This stone was used in the art of glyptic and the masters of Ancient Rome. The cost of such products in ancient times was quite high.

However, the greatest flourishing of the popularity of chrysoprase as a jewelry, ornamental and facing stone came in the 18th century.

An example of this is the mosaic decoration of the ancient interior of the chapel of St. Wenceslas and the ancient tables encrusted with chrysoprase, which are now in the beautiful palace of Sanssouci in Potstdam, preserved in the Czech capital.

Unfortunately, gradually the popularity of chrysoprase has come down to "no", and today it is used quite rarely.

Specialists classified chrysoprase as a gemstone of the 3rd order. Externally, this gem is a translucent stone of a beautiful green color range with a glass luster. Shades of varieties of chrysoprase can range from green-blue and apple-green to a saturated emerald with golden tint.

The color of the stone is associated with its name, which has Greek roots. It is formed from two Greek words - "chrysos"( "chrysos") and "prasos"( "prasos").The first of them is translated as "gold", the second - "leek".

The main criteria for assessing chrysoprase:

The higher these figures - the higher its price in the world market.

Depending on the color saturation, uniformity of staining and the degree of translucence, jewelery varieties of chrysoprase are distinguished:

Chrysoprase belongs to the group of chalcedons( translucent quartz), and is one of its most valuable varieties.

The chemical composition of chrysoprase is silicon dioxide. Accordingly, its chemical formula: SiO2.

Green shades in the color of the mineral ensure the presence of fine dispersed inclusions of nickel hydroxides, including pimelite( sodium silicate and magnesium), as well as willemsite( zinc silicate), serpentine( magnesium-iron hydrosilicate) and other minerals. These impurities color chrysoprase in green and blue-green hues. True, under the influence of bright sunlight, the intensity of the color of chrysoprase can fade.

In nature, chrysoprase is found in the form of small aggregates. The fibers of its crystals have radial-radiant structure.

Until recently, the largest deposit of chrysoprase was in Poland, in Upper Silesia. It was developed since the XIV century, but now its reserves are exhausted.

Today, the main deposits of chrysoprase are in Australia, Brazil, South Africa, Tanzania, India, the USA( in California), Russia( in the Urals) and Madagascar.

Lithotherapists claim that chrysoprase is an excellent tool for:

At the same time, traditional healers warn that prolonged contact with this stone can promote the formation of gallstones.

The magic properties of chrysoprase are considered strong. They have been known to magicians since ancient times. It is not for nothing that Europe used it for many centuries to make amulets that protect its owners from nightmares, evil eye, spoilage and evil spirits.


It is also believed that chrysoprase is able:

That only helps chrysoprase only people open, honest, active and with good intentions, and evil and lying to him can not count.

Most of all, according to astrologers, chrysoprase is suitable for Aquarians, sincethey are the ones who most want to change the surrounding reality. They chrysoprase promises good luck and protection from adversity.

Also this stone is like an amulet to Capricorn, Pisces, Taurus, Cancer, Gemini, Sagittarius and Virgo. But the Lions, Scorpions, Libra and Aries chrysoprase is unlikely to help.

In the past, European craftsmen used chrysoprase as an expensive finishing stone for interior decoration, as exemplified by interiors:

Today chrysoprase is used only as a jewelry and ornamental stone for jewelry( mainly pendants and necklaces) and art crafts.

How to distinguish natural chrysoprase from forgery

As imitations in the market of jewelry products, instead of chrysoprase, its imitations made of cetsite( synthetic material of Chinese manufacture) or painted with nickel salts of chalcedony can occur. Often their coloration has artificially bright saturated shades that are not found in nature.

To distinguish the cheaper falsifications of chrysoprase, just look at the price tag. A natural stone can not be cheap.

And, of course, it is worth paying attention to the color uniformity and the presence of defects - natural stones are not ideal. So the presence of natural inclusions, darkening zones and uneven coloring are the best guarantee of the naturalness of the stone.

The main condition for the care of chrysoprase - keeping it away from the sun, becausepermanent exposure to ultraviolet can discolour the stone, make it faded and unattractive. Fortunately, this is easy to fix. It is enough only to wrap the mineral for some time with a damp cloth and let it soak with moisture.

In addition, an important condition for the conservation of chrysoprase is:

Photos of the chrysoprase stone and its products 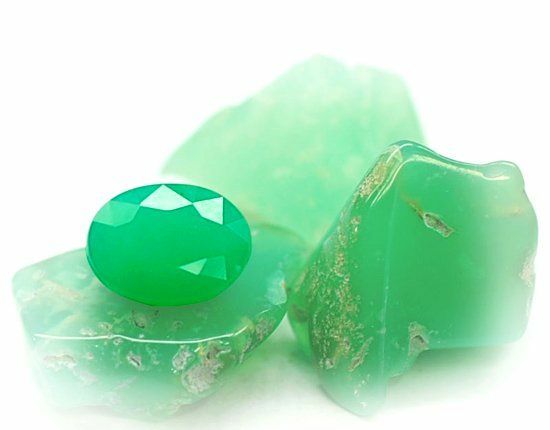 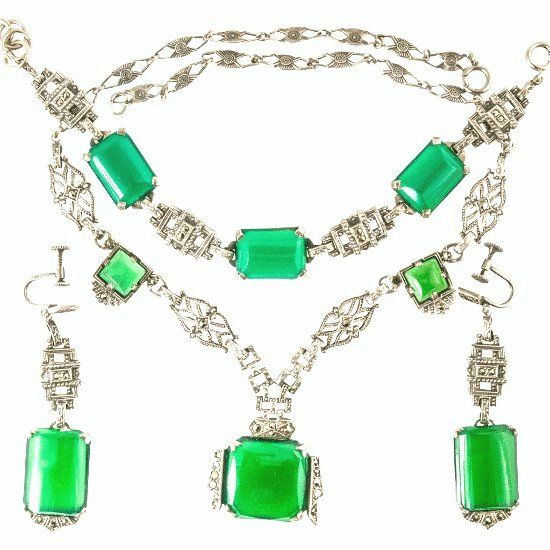 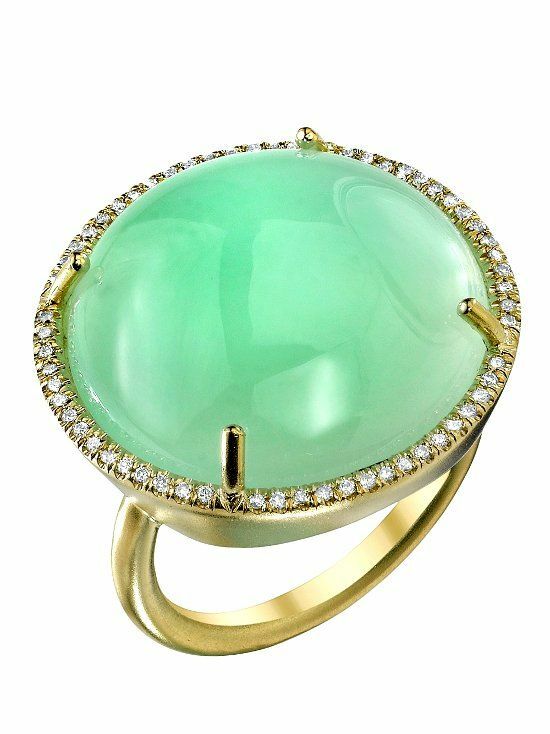 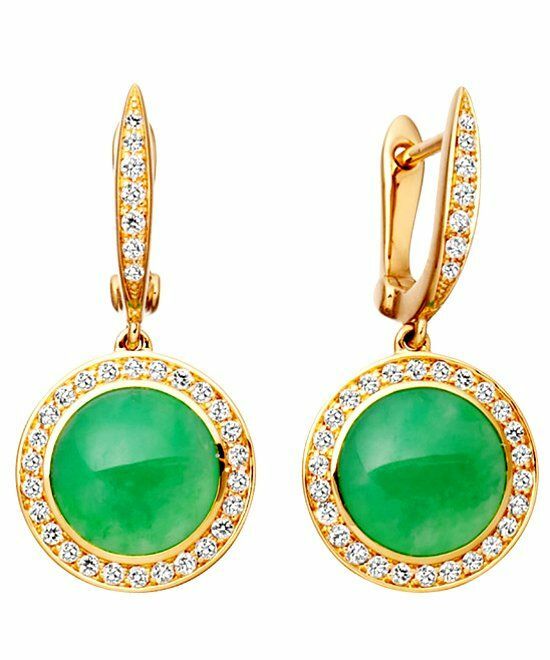 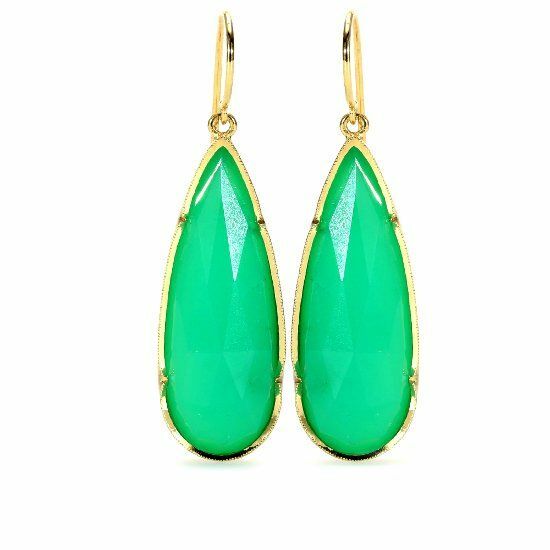 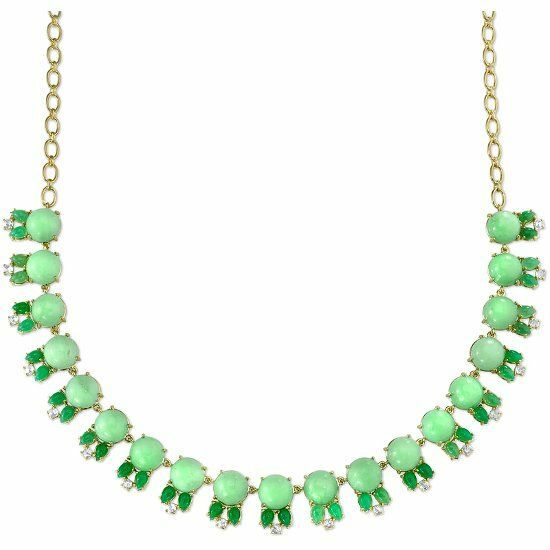 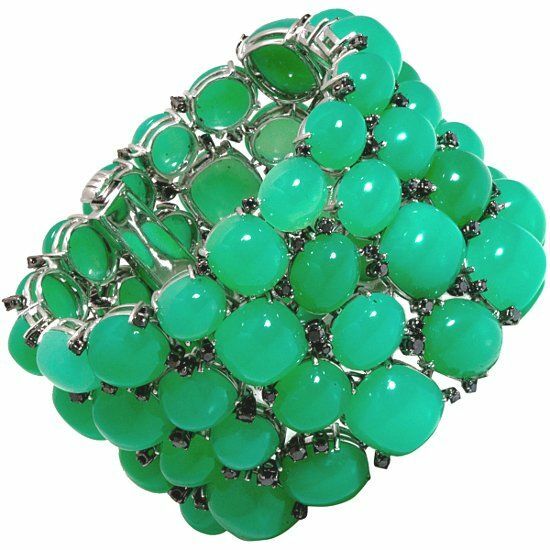