Dove pigeon on the window or balcony 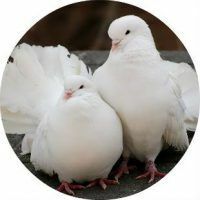 Many of the folkloric signs are associated with a particular bird - a pigeon. In many countries it was revered as a sacred bird. So in China, the dove is considered a symbol of longevity, filial and maternal love, and a sign of good health. In a number of other countries of the East, the pigeon was revered as the embodiment of love, purity, a strong family and carnal pleasures of spouses.


In Ancient Rome and Greece, this bird was a symbol of peace: it was she who was entrusted with the postman to carry the olive branch, which marks the beginning of the Olympic Games, and hence the truce. According to the Christian religion, it was he who flew to the ark with an olive branch from Mount Ararat, carrying the message to the suffering people that the Flood had ended.

Slavs of pigeons were also loved, considering them to be clean, intelligent and kind birds. The dove was considered a symbol of love and faithfulness, a sign of joy, and a haven for the liberated souls of the dead righteous. However, in view of the fact that they were often used as postal birds, and there were few good news in those days, little by little pigeons were considered a sign of bad news.

If the pigeon sat on the windowsill outside the window, then it bears only good news, news from a man with whom there has been no connection for a long time. If a bird holds a twig, a beetle, or a leaf in the beak, the family can soon expect an addition or a good financial profit.

Sometimes one or several pigeons dance on the windowsill, as this means, that soon the house will be visited by guests. The more birds and more noisy they behave, the more noisy the company will come.

If two pigeons have settled on the windowsill, you need to observe their behavior. If they coo or sit quietly side by side - this sign means a happy and peaceful family life for the inhabitants of the house, as pigeons are considered a symbol of a strong marriage. For unmarried people in the house, they mean a quick matchmaking. And if the birds fight and jostle - nothing good for the couple does not mean, soon in the family are possible quarrels and discord.
to the table of contents ^

Hit in the window

A bird screaming in the window promises all sorts of illnesses to the inhabitants of the house, and if the pigeon flew into the house or fell dead after striking the glass, it is a sign of the imminent death of one of close relatives.

However, for an unmarried girl or childless woman, a pigeon knocking on the window carries only good messages on the signs: the arrival of matchmakers or the long-awaited joy of motherhood.

A nest on the balcony

Often in recent years, pigeons nest their nests near human dwellings - on balconies, on rooftops, attic floors. This event should not be feared, it is believed that pigeons settle in places with good energy and calm atmosphere, and therefore in this home, according to the signs, there will always be joy and happiness.

Many believe that a pair of pigeons swishing a nest on the balcony willto remove troubles from the house and its inhabitants, to keep their peace, to predict the appearance of troubles. The only problem they can pose for people is the intense noise and the soiled balcony.