Do all cats love valerian and why do they like it 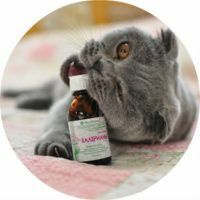 People use valerian to prepare medicines that soothe the nervous system. But on cats, preparations based on this plant have quite the opposite effect. The behavior of a cat under the action of a valerian can seem funny, but only at first glance. The responsible owner should know that valerian is a heavy feline drug. From valerian, a cat can be prone to hallucinations, panic or behave aggressively.

Valerian rhizomes are characterized by a rich chemical composition - they contain essential oils in high concentration, as well as about one hundred other components, such as borneol, fragrances of camphene, pinene, and also valeric acid.

Reasons for the addiction of cats

There are several reasons for the love of cats to valerian.

Veterinarians perfectly know what valerian cats like - especially strongly the animals of the cat family tend to tincture of valerian. The reason for this love is the most common alcoholism. Addiction does not cause valerian, but the alcohol contained in the tincture. The animal's organism is not capable of resisting alcohol, so addiction arises immediately.

Under the influence of alcohol, the cat's body is destroyed very quickly - liver, stomach and kidney failure develop. Valerian in tablets, containing about 1.5% of essential oils and the mass of allergy-causing synthetic substances, is no less a threat. The cat first experiences euphoria, and then can fall into a narcotic sleep.

There is still no definite answer to the question of how permissible to use valerian for the treatment of pets. There are both positive and negative side effects of valerian on cats.


As for the kittens at the age of up to six months, then the valerian does not affect them.

Remember, adult cats and valerian are two incompatible concepts. If your cat at least once tried this drug, it immediately gets used to it and will do its best to look for a "new dose".
to the table of contents ^

Cats owners often have a question - what if a fluffy pet found a vial and drank a lot of valerian tincture? How to determine an overdose and what to do in this case?

First of all, carefully observe the cat, and if it starts rolling your eyes, fall to one side, experiences convulsions, and a white foam starts to go from your mouth - you need to urgently drive the animal to the vet!

The danger of overdose is that when you consume a large amount of valerian, a cat can fall into a coma, and only a qualified specialist can help in this case. It is not for everyone to get rid of the seizure independently. In addition, it is still unknown what kind of dose can provoke a lethal outcome - it depends on the individual characteristics of the cat's body.

Not all cats love valerian

It turns out that the stereotype that absolutely all cats love valerian is wrong.

Approximately 30% of members of the cat family are completely immune to the action of this herb.

There are breeds of cats that do not react at all to the smell of valerian, for example, Siamese cats.

Dependence on valerian is largely related to the hereditary factor. If parents had a relationship, then the offspring would be affected. Sexual affiliation is also an important factor, cats are several times more likely to become addicted than cats.

Each owner should be careful and do not expect what your pet nature has protected from valerian dependence.