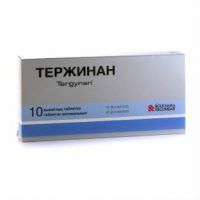 Almost all sexual infections cause inflammation in the genitals, which is manifested by pain, itching and burning. Terzhinan - a very powerful complex remedy for the removal of all these symptoms. It quickly removes discomfort and is especially effective in mixed infections, which are caused by several bacteria at once. The drug has a complex effect on the microflora of the vagina and has virtually no side effects.