At what diseases is used ichthyol ointment 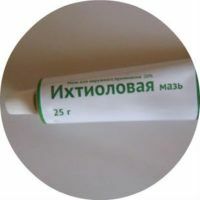 Despite the progress in medicine and the development of a large number of innovative products, old and proven drugs remain popular, because their effectiveness has been tested for years. Ichthyol ointment is one of them. Its use helps to get rid of many skin and not only diseases. The active substance is ichthyol, which affects the structure of the skin.