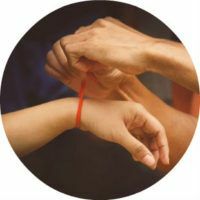 The red thread on the wrist is a well-known amulet in many religious movements. But she gained popularity after the singer Madonna told the world about her belonging to the Kabbalah. This line of Judaism is associated with esotericism and pays much attention to various talismans and rituals.

Charm with red thread on her wrist may have different meanings depending on where the person about itlearned. There are 2 basic ideas that can be transferred through this talisman: the first came from Kabbalah, the second - from pagan beliefs and prejudices. But

red thread tied to other nations and religions, African tribes, Australian Aborigines, Hindus in Indian temples. Depending on what exactly people put in the red thread, it will depend on how to tie the thread and how to wear it.

You can not undo the fact that some people tie a string, trying to use the power of auto-suggestion. Recently, many films and books have appeared that are designed to teach a person to develop the power of thought, capable of drawing into his life good luck and all that he longed for.

Many women after this tie a red thread on the wrist for love, focusing mainly on the color of passion. Resourceful jewelry stores began to sell ready-made talismans in the form of beautiful silk laces with a small decoration of gold or silver. Such things, if they will, will be helped only by autosuggestion, since there is no religious component behind this.

There is another unusual variant of treating the red thread on the wrist came from young girls who suffer from eating disorders. Some consciously choose the path of unhealthy weight loss, and such an accessory helps them find "their man" in the crowd.

red thread on her wrist with anorexia on her left hand says that she already has the disease, and on the right - that is only on the way to it. If parents notice that their daughter starts to lose weight sharply and at the same time wears a red thread on her arm, then this is an excuse to sound an alarm.

The red string on the wrist in Orthodoxy is forbidden. First, the Orthodox priests consider Kabbalah to be an occult current, which is based on magical rituals and connections with the dead, and they do not recognize it.

Secondly, if the thread is viewed from the perspective of popular prejudices of people in Russia and the CIS countries, the various folk beliefs with pagan origins of nature, the Church is also forbidden. An Orthodox person has no right to endow things with magical power, unless this is a religious symbol.

on his right wrist

red thread on his right wrist is known mainly in Hinduism. This religious trend is widespread in India and has a very ancient history, therefore, as attributes of belonging to Hinduism, there are often various amulets and talismans.

In this case, the red thread on the right hand is usually worn by unmarried girls to protect themselves from evil evil eye. On the same hand, the thread was worn by many Slavic pagans, but some Russians do so now. Traditional medicine in the Middle Ages offered to treat warts in this way, and at other times it could be worn in order to attract luck to their side.

On the left wrist

Kabbalah proposes to wear a red string on the left wrist, which means protection from the evil eye, the negative energy of the surrounding world and people around. In this current, the left hand is responsible for the supply of negative energy to the body and aura of a person, that's why it needs special protection.

And in the Kabbalah the red thread on the wrist not only does not let the evil spirits into the body, but also helps to drive it away.

thread In order to protect yourself from negative energy, any thread will not work. The first rule is that it must be woolen, that is, of natural material without any impurities.

This is not only a sacral meaning, but also a scientific one: the wool creates a small charge of static electricity, and the blood passing from it is charged by it. This has a beneficial effect on the general state of the body, even if you do not believe in the magical power of this amulet.


The second rule is that the thread must be brought from the temple, that is, it must be charged in place of power. If you go to the store and buy a tangle of woolen threads, then it can heal the body, but it is not able to protect from the evil eye and negative energy.

The red thread from the evil eye on the wrist should come from Israel or at least be sanctified by the rabbi. Kabbalah is officially recognized by all orthodox currents of Judaism, so you can "charge" the thread in any synagogue.

If a man tie a thread not on the basis of the teachings of Kabbalah, but solely on his own convictions, then it can be made of any material. In this case it is better to choose the one that is thicker, so that it would be worn as long as possible. The usual cotton thread in one addition rarely lasts longer than a month due to the small thickness and low strength of the material.

How to tie an

The red wool thread on the wrist of the Kabbalah is tied in a special ritual. First you need to find a person who will help to do it properly, because if you tie a thread yourself, then it will not save the evil eye.

The yarn must be necessarily brought from sacred places and be made from 100% wool.

To tie it should not be an outsider, but a close-minded person with whom a good relationship reigns. This detail means a lot, because a detective can harm a person during a ritual. The thread is knotted 7 knots and at this time one of the Jewish prayers is read, chosen on the basis of the purpose of this amulet( love, family, health and the like).

If the red thread is tied not by virtue of religious belief, but by one's own convictions, then it must still be done by another person. The number of nodes in this case is not important, but during the process, the one with the thread on his hand must speak to himself, why he decided to do it. For example, if a person wants to attract good luck, he can say it himself or out loud, in order to tune in only to good.


In both cases, the thread should sit tight enough on the wrist, but do not press on the skin. She should not hang around and crawl out of her hand. The woolen thread has the property of being seated, so it can be tied up slightly more freely than cotton or silk.

You can not hide the red thread on your wrist from Israel under clothes and wear with accessories: watches and bracelets. It can not be removed and untied, since it will lose touch with the person and lose its power. It can not be transferred, taking off from itself and tying on the arm of someone else.

If the thread is torn

It is believed that a thread tied according to all rules can only be torn if it absorbs a large amount of negative energy. During the gap, it can no longer protect a person, so its owner must thank the thread for the work and throw it away.

It can be sent as in a trash can, and burned: there are no specific instructions on this matter in the Kabbalah. To not remain without protection, in the near future it is necessary to tie a new thread to the place of the former one.

It also happens that the thread can break regularly, every 2-3 weeks or even more often. In this case, you need to think about your surroundings and see who can wish you harm. If you stay away from detractors, then such an amulet will serve much longer.

The best books on self-development, psychology and personal growth http://woman-l.ru/luchshie-knigi-po-samorazvitiyu/