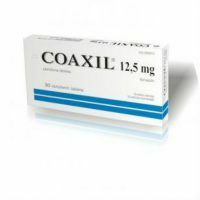 Coaxil is an antidepressant, which until recently was considered safe, but now doctors have also made public the dangerous consequences of using the drug. Contrary to the statements of the instruction, Coaxil, like any other antidepressant, causes physical and mental dependence.

The medicine acts as an energetic, improves mood, removes emotional and motor retardation, increases the overall tone of the body, reduces the symptoms of withdrawal symptoms due to the use of alcohol or drugs.

After taking the pills, the feeling of fear, anxiety, and anxiety is reduced. The drug does not affect sleep, attention and memory. After its application, the somatic state of patients improves, pain in the abdomen, muscles, nausea, fever disappear.

The recommended average therapeutic dose for adults is 12.5 mg of tianeptine( 1 tablet) 3 times a day. For patients with cirrhosis of the liver and chronic alcoholism, a change in this dose is not required.

For elderly people( over 70 years of age) and patients with kidney failure, antidepressant medication should be reduced to 2 tablets per day.

Antidepressant Coaxil should be taken orally just before meals, with plenty of water.

When discontinuing treatment with Coaxil, the dose should be reduced gradually over 2 weeks. In some patients there is a decrease in concentration of attention, which is completely restored after the withdrawal of the drug. In order to avoid unpleasant consequences, patients taking Coaxil, it is recommended for the time being to give up activities that require fast psychomotor reactions and increased attention.

Treatment Coaxil depressive states in panic attacks are carried out under the strict supervision of a specialist, since during the depression increased the risk of suicide attempts. Also, the supervision of the treating doctor is required for patients suffering from alcohol and drug dependence.

Treatment with tianeptine should be discontinued 48 hours before the onset of surgery, provided that general anesthesia is performed. In the case of emergency surgical care against the background of taking an antidepressant, strict medical control over the patient's condition is necessary.

When switching from the use of MAO inhibitors to tianeptine, a break of at least 14 days is observed. In case of switching from an antidepressant to inhibitors, it is enough to wait 24 hours.

Very often patients with neurological diagnoses become a kind of drug addicts and can not without a constant dose of their drug.

Read also about the features of using a daylight tranquilizer Afobazol http://woman-l.ru/kak-pravilno-prinimat-afobazol-v-tabletkax/
to the table of contents ^

Admission Coaxil in therapeutic doses under the supervision of a physician does not lead to dependence, but patients often develop addiction to it, because the drug is considered narcotic. According to the studies, Coaxil negatively affects the nervous system, disrupts the normal functioning of all organs and systems, causing damage comparable in severity to heroin.
loading. ..


One of the severe consequences of prolonged use of Coaxil is the development of severe depression, up to suicide attempts. Possible manifestations of aggression towards other people and themselves. Adaptation to the drug is formed quickly, after about 14 days. A person begins to feel strong headaches, a feeling of depression. Behavior becomes strange and inadequate. Reception for a long time leads to complete degradation. Teeth break down, a person can lose sight.

Many addicts use Coaxil as a substitute for opium drugs, dissolving it in water and injecting intravenously or intramuscularly. When using the drug in this way, dependence develops much faster. Additional negative consequences: vein thrombosis or muscle decay due to incomplete dissolution of the drug in water, more pronounced breaking than after the withdrawal of heroin.

Treatment of co-alcohol addiction is a rather complicated process, since the withdrawal syndrome is severe and painful, even opiates do not alleviate it. Regular use of Coaxil causes severe depression, patients are socially dangerous, aggressive behavior.

Structural substitute for the active substance Coaxil is Taneptin sodium. According to the pharmacological group of analogs, there are many: Agomelatin, Amizol, Depres, and others.