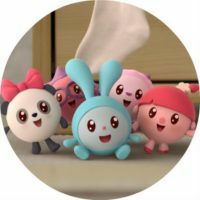 Every mother wants her baby to grow smart, develop in time and distinguish between good and bad. The main thing in this task is upbringing. But the big influence on the child is provided by the cartoons that he watches. Therefore, in this article, we will just talk about contemporary cartoons, which can be viewed at any time online and free of charge on special websites. 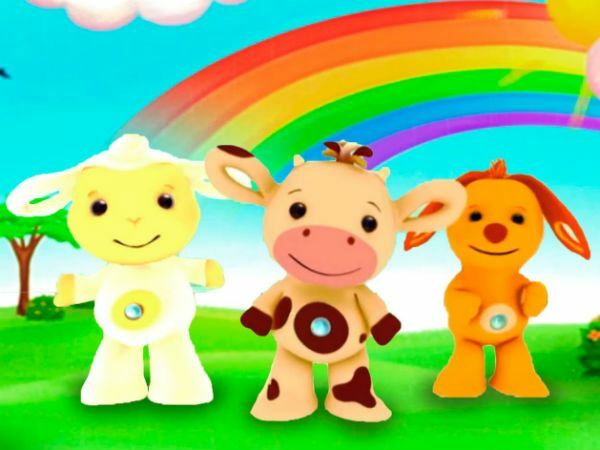 This funny 3D animated series is suitable as the first cartoon for viewers from 3 months. The main characters - a dog, a lamb and a cow will teach the baby. In the cartoon, they study figures, colors, numbers, letters and many interesting things. Also, the main characters of the cartoon create various interesting situations, play hide-and-seek, thereby forcing the small spectators to be attentive and think. 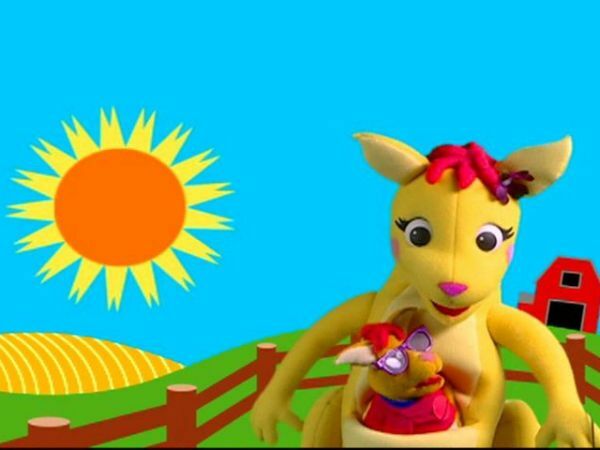 The animated series includes several parts for children from 3 months to 3 years. Each series is devoted to a specific topic. Adapted audio and video materials are prepared by qualified teachers. Under quiet classical music children's mobile games are turned, letters, animals and toys are shown. Kids with curiosity watch how the pictures change, and moms at this time can calmly do their own business. 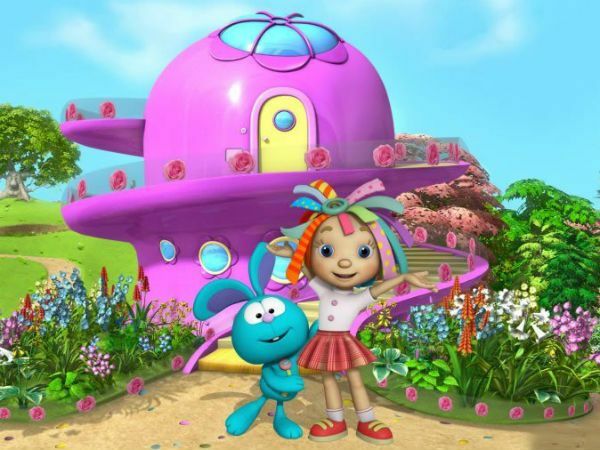 This funny cartoon series for kids from the year about the girl Rosie, who lives in a magical 3D world where even trees talk. A rabbit named Shustrick and other unusual animals are Rosie's friends. Rosie lives in the doll house, her life is filled with fascinating adventures and funny moments. She is a friendly and sympathetic girl who will never leave a friend in trouble and always help everyone. The animated series teaches kids to accept people as they are, to find in each person something unusual and special. 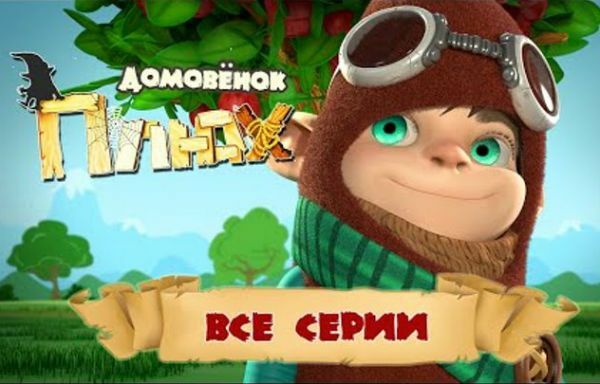 A cartoon series for children from the year about a gay little house named Pluh who lives in an apartment and tries in every way to help the owner with domestic problems. True, it does not work very well for him. But Plyukh does not lose heart. He always tries to correct his mistakes, which will be learned by the kids when viewing this cartoon. Colorful 3D graphics and excellent musical design create a playful and positive mood of the animated series.

Once upon a time there was a princess 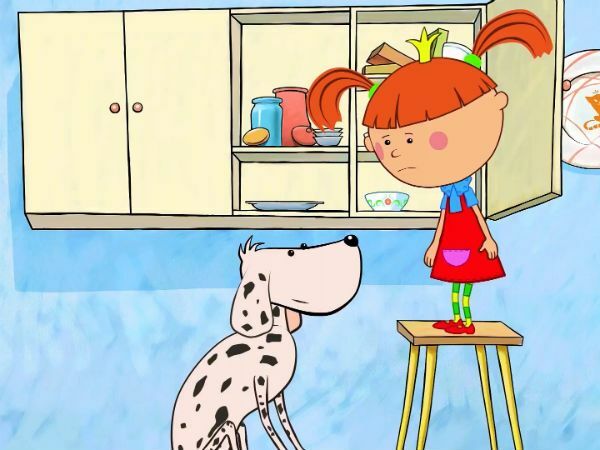 A cartoon series for preschool children about a disobedient little girl who was accustomed to the fact that all her whims are performed by servants, and she just rests and lives for her own pleasure. From this she became bored, and she began to seek adventure on her head. Funny and instructive songs from the cartoon can be easily and easily learned. The animated series shows what disobedience leads to and teaches to respect, obey and appreciate parents, help children learn how to correct their mistakes. 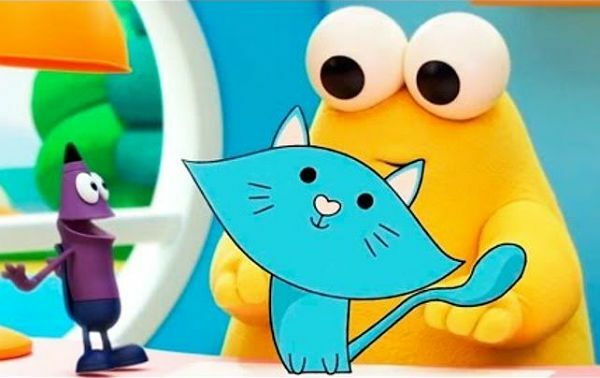 Animated series for kids from year to 4 years. The protagonist of Ponchi is a born artist. Together with his friend Flomaster Flomik they are ready to depict everything that they see on paper. Friends love to draw, and will happily teach this to every child. The animated series will delight children and parents with wonderful 3D graphics with bright saturated colors.

How to choose a desk for a schoolboy for a home http://woman-l.ru/kak-vibrat-stol-dlya-shkolnika/
back to contents ^ 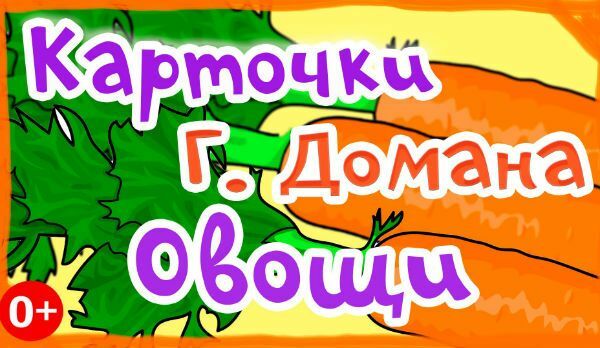 Excellent educational videos for children from 6 months to 3 years. Teaching videos based on the game with developing cards, invented by Glenn Doman. He believed that in the first 6 years the child absorbs everything "like a sponge," and the child learns to read easier than a schoolboy. When watching a training video, the child is formed by the idea of ​​the world around him. Regularly viewing these cartoons, the child learns to distinguish between different things, read, and on a subconscious level remembers the spelling of words. We can not fail to note the cheerful musical accompaniment and the positive leader, who in every way encourages and praises the baby. 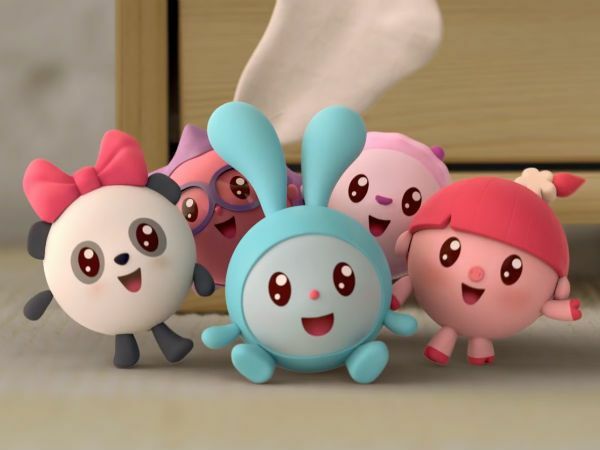 Kind and positive cartoon series for children under 4 years."Malyshariki" - these are familiar to many "Smeshariki" in childhood. Realistic 3D graphics made the main characters bright and sweet. Each series begins with a fascinating story, and ends with a good song that fixes the result. With such a feed, children are very easy to learn information, and they are happy to watch this cartoon again and again. 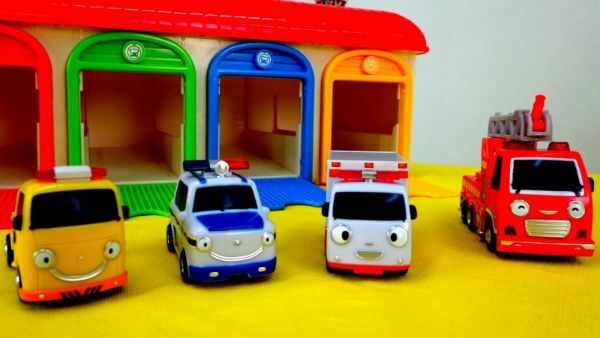 In this animated series for preschool children the main characters of 3D cars are fire, police, ambulance, tow truck, concrete truck and so on. After watching the cartoon, the child will not have any questions about what kind of machines they are and why they are needed. Funny songs and bright animation will help kids to easily understand and learn the material. 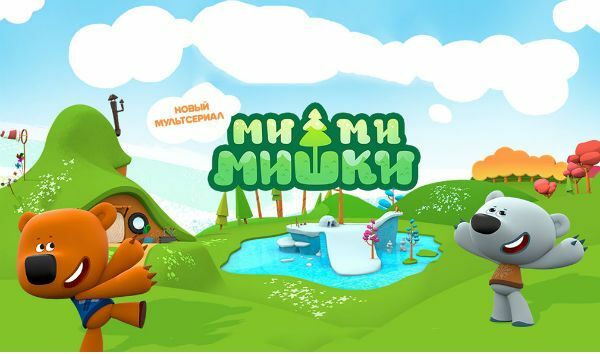 3D animated series for all age categories about two inseparable friends of bears. One is called the Cloud, the other is Innocent. The cloud is a polar bear, and Kesha is brown, but this does not prevent them from being together and going towards adventure. Friends are very curious, they are interested in absolutely everything around. They are trying to study the world around them, they are looking for answers to different questions and just having fun. A funny and memorable song about the bears will please the small audience. The animated series will teach kids to always act together and not be afraid to open new boundaries. 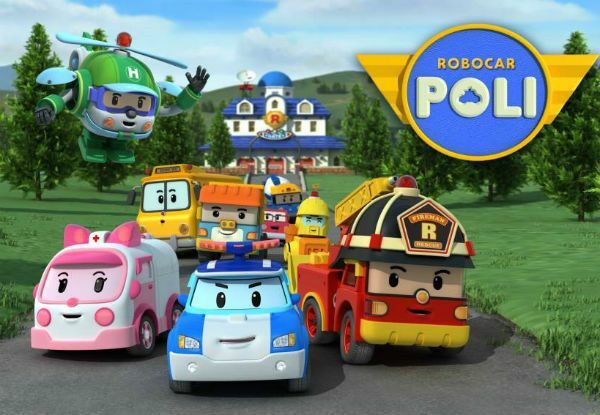 Animated cartoon series for kids from year to 4 years about lifeguard typewriters. The protagonist is a police car. He is brave and fearless, at any moment ready to help. Helly is a helicopter. He looks at the city from a bird's-eye view, and immediately rushes to the rescue, if something happens. Roy is a fire truck. He is the strongest of the team of heroes, he does an excellent job of extinguishing fires. Amber is an ambulance. She is kind and caring, she is always ready to help. Together, friends are a brave rescue team. Funny music makes watching the animated series even more fun. When watching this cartoon, the kids remember what to do in order not to get into trouble, and how to help a difficult situation in another person. 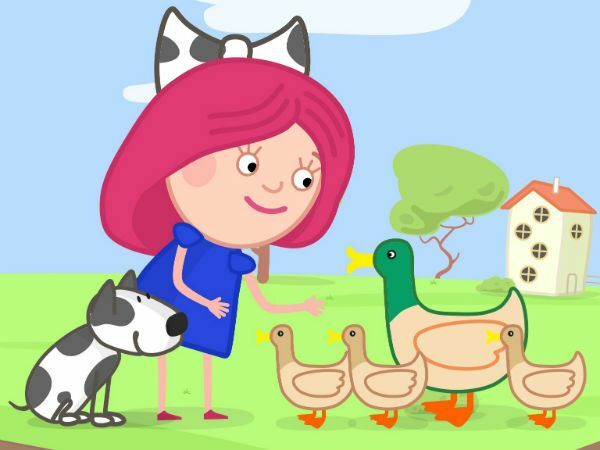 This interesting cartoon with pretty simple graphics about a girl with pink hair is suitable as a developing cartoon for children 2 years. It is watched not only by children, but also by their parents. Smarta loves to travel on her wonderful bag with Spoti's dog and navigator Hey. The animated series is very popular with kids, because it is also interactive. And this means that the children will like to solve puzzles and riddles along with Smart. The plus of the animated series are exercises for the development of memory in toddlers. 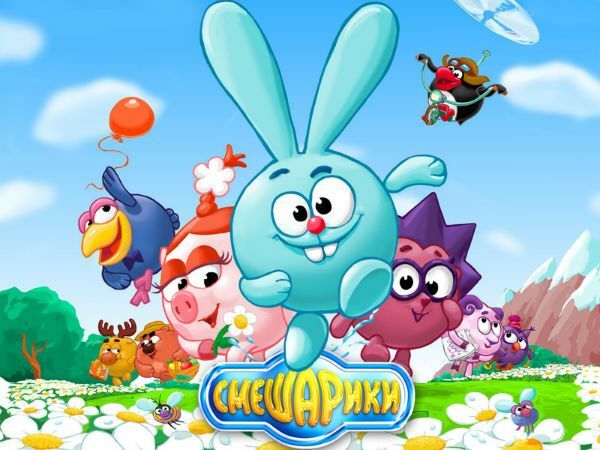 This is an excellent animated animated series for children 5 years and older. The story of the friendship of funny little animals will appeal to both children and adults. Thanks to the round shape of the animals in the cartoon, the children will easily draw them on paper. Smeshariki often fall into ridiculous situations, the output of which is sought all together, so that after watching this cartoon, the child will learn to get out of difficulties, help others and receive a large amount of cognitive information. 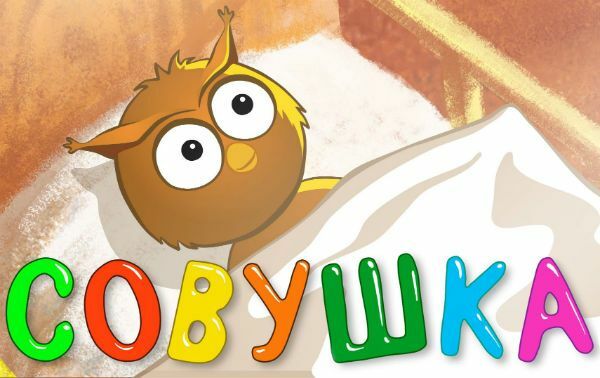 This is a cartoon-lullaby for animals. It helps children to fall asleep. The main task of the song is to calm the baby and adjust to sleep. Be sure to show this cartoon to your child before going to bed.

Thomas and his friends 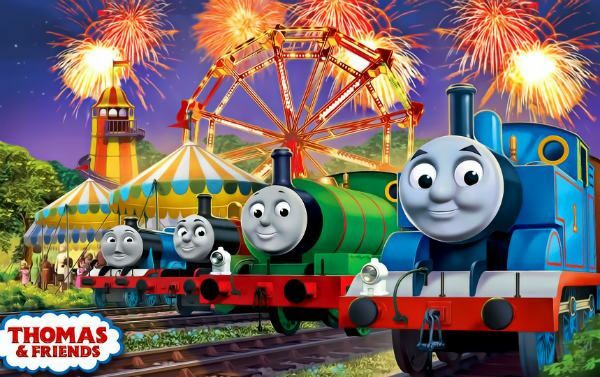 A fascinating cartoon serial about the adventures of Thomas the Trampoline and his brothers, designed for children from the year. Each series is not like the previous one. Small 3D trains are very busy. Each of them has its own business: one carries cargo, the other repairs the rails. The animated series is very useful for children, because it teaches responsibility and diligence. At the end of each series, the kids are waiting for a surprise - a fun karaoke song. 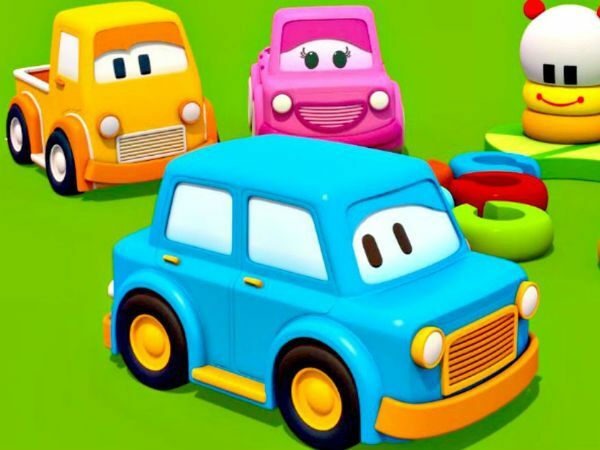 A cartoon for the youngest spectators, although children over the age of the year are sure to be interested in it. The plot of the animated series is very simple and easy for children to perceive. The main characters are smart cars that possess all human qualities. They like to learn everything new and interesting. In each series, the characters encounter different problems and unknown phenomena, and try their best to understand them, in order to explain the smallest detail to the child. The main feature of this animated series is the absence of words. The actions of 3D machines are intuitively understandable to the child, thanks to properly selected music and excellent graphics. 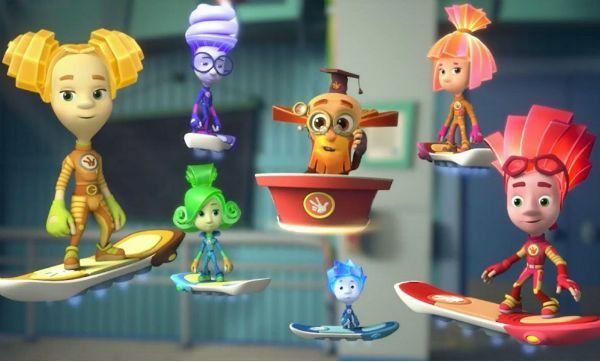 Very popular 3D cartoon for children from 3 years, created based on the book by Edward Uspensky - "Guaranteed little men".The main characters are the boy Dima and his friends the little iron little men of Fixica. In each series, they teach the children something new. Fixicks are excellent at repairing any equipment. The cartoon is easy to remember thanks to a fun song in the beginning. The animated series was created for family viewing, so that adults will also like it.