What a child should be able to do in 1 month 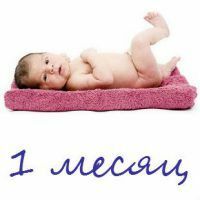 The first month of life of a newborn baby is perhaps the most important and crucial period for both his parents and himself, because in just a few weeks he had to adapt to the real world after living in the womb - his blood circulation was reconstructed, the immune,endocrine and digestive systems, they earned kidneys. The physical, mental and mental development of the infant has begun, and it is very important that the baby develops correctly.