Instructions for use Sibutramine for weight loss 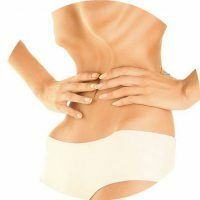 Sibutramine is an anorexigenic drug effective for weight loss, which is prescribed only for indications for the treatment of severe obesity. However, the uncontrolled or improper use of this medication can lead to various unpleasant consequences.

The active substance of the drug - sibutramine hydrochloride - is available in the form of capsules of 10 and 15 mg. Used as an additional tool in the fight against excess body weight. Sibutramine is used in conjunction with carefully controlled dietary nutrition and increased physical activity. The medicine reduces appetite and the amount of food consumed by the patient, increases thermogenesis and affects brown fatty tissue.

During therapy, a slight increase in blood pressure is recorded in patients( for 2-4 mm Hg) and heart rate increases( by 4-8 beats per minute), but in some cases more serious changes are possible.

According to the annotation, the drug is applied once a day( preferably in the morning) and the initial dose is not more than 10 mg( with poor tolerance - the dose should be reduced to 5 mg per day).If there is no result, the doctor can increase the dose to 15 mg per day in 4 weeks. The duration of the course of treatment depending on the results can be 12 months.

During the course of treatment with Sibutramine, it is necessary to control the level of blood pressure and heart rate every 14 days during the first 2 months of treatment, and then reduce to 1 time per month. In people with arterial hypertension at a pressure level of 145/90 mm Hg, therapy should be discontinued and refer for recommendations to the treating doctor.

Appearance during the treatment of chest pains, respiratory disorders( dyspnoea) and edema of the lower limbs indicates a possible development of pulmonary hypertension, in this case, you should also contact the physicians.

Sibutramine accelerates the release of serotonin, which affects the appearance of a sense of rapid saturation, resulting in a craving for carbohydrate food decreases. At the same time, excess fat deposits are actively burnt and excess kilograms go away. Among the positive moments, the ability of the drug to reduce the amount of "bad" cholesterol and increase the formation of "good", which helps the metabolic process, is also noted.

Sibutramine, according to the instruction, is used as a part of the supportive complex treatment of patients with excess weight in cases:

Read also on what the correct and safe for body weight loss is based and what are the most common mistakes of those wishing to bounce back their weight http://woman-l.ru/4-soveta-dietologa-kak-nachat-pravilnoe-poxudenie/

Sibutramine is contraindicated in combination with the following drugs:

Use with caution while taking medications that increase the QT interval( electrical ventricular systole), in patients:

Because of a lack of clinical data, sibutramine is not given to people over 66 years of age.

Among the negative consequences are marked:

A fairly common consequence of the use of Sibutramine is symptoms reminiscent of the state of withdrawal in addicts. This anxiety, lethargy, sleep disturbance, coordination, bad mood and even suicidal tendencies. In a number of cases, there may be fainting, trembling of limbs, pain behind the sternum, hearing impairment, swelling, and shortness of breath.

The drug provokes the appearance of a cold, muscle pains, inflammation of the mucous membrane of the stomach and intestines, a decrease in sexual desire. The work of the sebaceous and sweat glands is disrupted, as a result of which acne appears on the body, sweating increases, the menstrual cycle may be disturbed. Deterioration of saliva production, which provokes the appearance of ulcers in the mouth, can develop caries.


Rare and very serious complications of taking Sibutramine are serotonin and malignant neuroleptic syndrome. Signs of this condition include increased anxiety, anxiety, fever, diarrhea, nausea, vomiting, impaired pulse, coma. If any of these symptoms occur, it is recommended that you seek medical help immediately.

During treatment with drugs containing the active substance sibutramine, and after it is completed, you should periodically undergo a medical examination to monitor the weight reduction and overall health of the patient.

With Sibutramine, alcohol and drugs that reduce drowsiness should be avoided. The agent can cause dizziness or darkening of visible objects, this effect is enhanced if you drink alcohol, which adversely affects the ability to drive a vehicle or perform work associated with increased attention and reaction speed.

Animal studies have shown that the use of this medication by pregnant and lactating animals leads to ugliness in the offspring. In addition, it is recommended to use effective contraceptives, since the drug adversely affects the development of the fetus, if pregnancy occurred during therapy.
to table of contents ^

For active substance, the substitutes for Sibutramine are Lindax, Goldline, Meridia and Slymia. If necessary, a specialist can replace a medicine with one of the analogues with a similar therapeutic effect: Fepranon with the active ingredient amfepramonom, and Reduxin, containing in addition to sibutramine and cellulose microcrystalline.