What a child should be able to do in 10 months 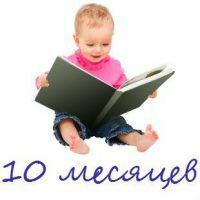 "Doing everything as big" - perhaps this is the main motto of a ten-month-old baby. By this age, the crumb has already sufficiently developed the fine motor skills of his pens, and also learned to control his facial expressions in order to try to repeat everything for adults. Now, imitating their relatives - mom, dad or relatives who communicate with him, the child can perform various actions: swing a bear, "feeding" a doll from a spoon or hitting a drum.

The growing baby's need for constant movement does not decrease either."Racers' children" - that's how sometimes they call ten-month-old kids who travel tirelessly around the apartment in all the ways they can: crawling, on all fours or taking their first steps with their tiny legs, holding on to furniture and walls.

And, of course, a ten-month-old kid continues to learn: to walk, talk, communicate.

At ten months the child grows and adds weight is not as noticeable as before. Nevertheless, the main indicators of its physical development - height and weight - are constantly increasing. So, for the tenth month of life the child on average adds in weight from 400 to 450 g and grows about 1-1.5 cm more. Another approximately half a centimeter increase the volume of his chest and head. Thus, by the age of ten months the baby normally rises from 9 kg 100 g to 1 kg 100 g, its height is 72-76 cm, the circumference of the chest varies from 47 to 48 cm, and the circumference of the head - from 45 to 46 cm.

Article on the child's abilities in 9 months - http://woman-l.ru/chto-dolzhen-umet-rebyonok-v-9-mesyacev/

An important step in growing a baby and an indicator of its physical development is the appearance of teeth. At this age, crumbs are actively forming the first milky bite and it is important for parents to follow all the recommendations and wishes of dentists so that in the future their baby will avoid problems with permanent teeth.

For ten months, lateral incisors begin to appear in babies, which helps the child to chew not only frayed, but also finely chopped or finely chopped food.

As for physical activity, normally a ten-month-old child should:

Children climbing on a couch, a ladder and other obstacles are very fond of ten months old, and they succeed very easily and naturally. But going down from the stairs or the sofa will have to teach the child to you, otherwise it can smash your face. You must show that it is most convenient to go down with your legs down. When your ten-month-old kid understands this, you can not worry about him.

At the age of ten months of the child, there is much to teach. At this age the kid can already meaningfully act with two handles and will gladly repeat for you the most diverse actions and movements that will contribute to the development of his fine motor skills and, as a result, mental activity.

So, ten-month-old children are very fond of and enjoy performing the following actions:

Ten-month-old babies are very fond of playing with small items, gently taking them with two fingers, large and index. Of course, such games should be conducted only under the supervision of adults, so that the little girl, wanting to explore small things, did not swallow them or put them in a spout inadvertently. And also, when playing with the child, try to use both hands. This will contribute to the development of both hemispheres of his brain and interhemispheric connections.

The main activity for a ten-month-old child is, of course, a game. It is playing, he develops both physically and mentally, improves his skills and knows the world. At the age of ten months the child's play changes. If earlier he liked to throw objects and watch them fall, beat them about each other or on the floor, now his games are more aimed at creating. Now the kid not only spins everything, but also tries to create - to collect the pyramid, putting the rings on the rod, making up of the cubes the turret, folding the cups. In this case, the child expects from his actions a certain result and is able to reproduce the actions that he saw a week ago.

However, a ten-month-old kid is not yet able to draw an analogy, generalize his actions and transfer them to other subjects. For example, if you show him how to rock a bear, he will not rock another animal, for example a dog, until you show him that you can do it too. Therefore, show the kid as much as possible actions with toys, expand the "repertoire" of his games, thereby helping him to expand his knowledge of the world.


And, of course, talk more with your favorite crumb, because he is already beginning to understand your speech more and more. Moreover, try to speak clearly and distinctly, and explain to the child the meaning of the words you say.

You may be surprised, but your baby is able to understand your jokes, listen to funny funny sounds and even laugh at them.

In addition, normally a ten-month-old kid should be able to:

At the age of ten months the child has an important moment in his social development - he begins to notice and accept strangers. Right now the child begins to communicate not only with relatives, but also with outsiders of adults. This does not mean that he ceased to be afraid of them, but nevertheless, he is ready to make contact and tries to "talk" with them in his "language".He likes communication, and he tries to support him in every possible way, not wanting to remain alone.

He has an interest in other children. And although the ten-month-old kid does not know how to play with peers, he aspires to communicate with them, so it is very important for parents to take the baby to the playground, the park and other places of children's walks at this age.

Another important point that speaks about the emotional and social development of a ten-month-old baby is his nascent sense of humor. Yes, do not be surprised, your little ones start to understand humor and notice that you are amused by his behavior. If he sees a smile and laughter on your face after some kind of action, he will necessarily repeat it again, to amuse you and give pleasure.

Also at this age the child understands when he is scolded or praised. He sensitively feels the mood and intonation of the adult's voice. The child begins to realize himself as a person and seeks approval from the adult.

Self-service skills for a ten-month-old baby are also developing. So, to this age the child should already be able to at least use a little spoon and drink from a cup or a special baby drinker.

Read about the skills of http://woman-l.ru/chto-dolzhen-umet-rebyonok-v-11-mesyacev/ child in 11 months.

Having in the arsenal of four to six teeth, a child in ten months should be able to bite and chew small pieces of solid food - fruits, cookies, crackers.

And, of course, an important skill that a ten-month-old child should have is planting on a pot. To this mandatory procedure the kid should be treated calmly.

You may be surprised, but already at this infancy you can teach your child to help you. Believe me, a crumb with great pleasure will be with you to collect and box your toys. He can even help you set the table if you show him how to put spoons or napkins on a table. Probably like the baby and put on a hat before going out. The main thing - praise your child and support his desire to do everything yourself.

All individually, my child began to do many things later than his peers. Now he caught up with them all and even surpassed them.