Stone charoite and its properties 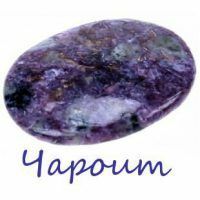 "Lilac miracle of Siberia", so often called charoite - one of the rarest and exotic gems of the world, an object of increased interest and attention both among collectors and ordinary connoisseurs of gems.

Uniqueness of charoite - in its unusual coloring, which varies from notbut lilac to deep ink. In nature, natural gems of such shades are extremely rare. And thanks to the interspersions of black, dark green, golden, orange and brownish-yellow hues, on the cut of the stone are formed extraordinary in its beauty drawings, bewitching look. These twisted, striped, feathery, ornate patterns, formed as a result of complex interlacing of crystals, make Charoite one of the most unique gems.

A special feature of the stone is its limited amount of reserves in the world.

The only charoite deposit discovered in Russia. It is located on the border of the Irkutsk region and Yakutia, on the southernmost border of the Uzhino-Viluisk paleorift, in the northwestern part of the Aldan Shield. The area of ​​the deposit is only 10 km ², and the age is about 107 million years.

Not so long ago, with the goal of preserving the world's only charoite deposit, the government of the Republic of Sakha-Yakutia decided to limit its production. Now the volume of mining charoite does not exceed 100 tons per year. This decision contributed to the increase in the cost of the mineral on the world market. Thus, the price of unprocessed charoite, depending on its quality, varies from 30 to 150 dollars per kilogram.

The name of the mineral was derived from the name of the Siberian river Chara, where its unique deposit was discovered. This happened in 1973, thanks to the Soviet geologists Yu. A. Alekseev and Yu. G. Rogov, although for the first time lumps with unusual purple minerals were discovered as far back as 1948.True, at that time Soviet geologists determined the discovered deposits as cummingtonite schists. Only in the early 1970s, complex exploration of the deposit was started, and in 1977 the name of the new mineral was approved.

Charoite gained worldwide fame after having won the main prize of the 9th Moscow International Film Festival. Then the creators of the film "Dersu Uzala" received a beautiful statuette in the form of a globe from an unusual lilac stone.

A few years later, in 1979 and 1980, charoite products became the main prizes of other international film festivals. And today the products from this unique gem are successfully exhibited at various international exhibitions.

Geologists have discovered about a dozen decorative varieties of charoite. They differ in their mineral composition, structural and texture features and shades of lilac.

Among the found samples you can see the gems:


The most valuable among them are uniformly colored samples of gems with massive, radiant, parallel-pentagonal textures and pronounced pearlescent ebb.

Charoite refers to the rare silicate minerals of the pyroxene group. Its complex chemical composition includes:

Also charoite may include:

Given that strontium and other radioactive components can enter the charoite composition, this mineral can be radioactive. For this reason it is necessary to carry out its dosimetric control. According to its hardness charoite corresponds to values ​​of 5-5.5 on the Mohs scale, and its density is 2.5-2.6 g / cm³.

The healing properties of charoite

Lithotherapists are sure that this mineral is able to help a person with many ailments and diseases.


So, they advise wearing amulets from charoite or applying a stone to the body when:

Fans of this unusual gem claim that even the contemplation of the mineral itself can have a beneficial effect on man:

Due to its extraordinary purple color, Charoite is a philosopher's stone, a mineral symbolizing harmony, spirituality and wisdom.

It is believed that this gem can give to its owner:

is capable of a mineral and protects a person from "energy dirt".

It is also believed that charoite is able to give its owner a special charm, a certain charm and attraction, not without reason he is called "charoite".Many believe that the name of this unusual mineral is consonant with the word "charm", and that the person who wears it will never be left alone.

In addition, many lovers of charoite are confident that this stone can help its owner to withstand difficult situations, and also to be realized by creative natures, and therefore recommend Charoite as an amulet to people of art. Patronizes the stone and philosophers, and poets.

Astrologers say that charoite has a positive effect on all the signs of the zodiac, but most suited Libra.


Will appreciate the positive impact of the mineral and people born under the signs of Gemini and Cancer, which he will help to expand consciousness, understand the surrounding world and discover the riddles of nature.

Charoite is known primarily as a fine ornamental stone. Due to its unusual color and texture, as well as its simplicity in processing and polishing, it is successfully used in ornamental art and jewelry. Charoite is polished in the form of cabochons, and also made of it:

After processing, skilled jewelers insert charoite into bracelets and earrings, brooches and pendants, rings and cufflinks. Especially good looks this gem in a silver frame.

As a jewelery and ornamental stone charoite was used not so long ago, nevertheless, with it is not one interesting and surprising story.

So, for example, there is an opinion that:

And those who have already acquired a mineral, it will be useful to know that it is fragile enough and it must be protected from blows, and washed only in warm water.

How to distinguish natural charoite from forgery

Charoite is a unique stone in its structure, which is difficult to confuse with another gem. It is difficult to forge it, but it's quite possible to buy cheap plastic instead of natural stone.

How can you not be deceived and distinguish natural stone from forgery?

Photos of stone charoite and articles from it 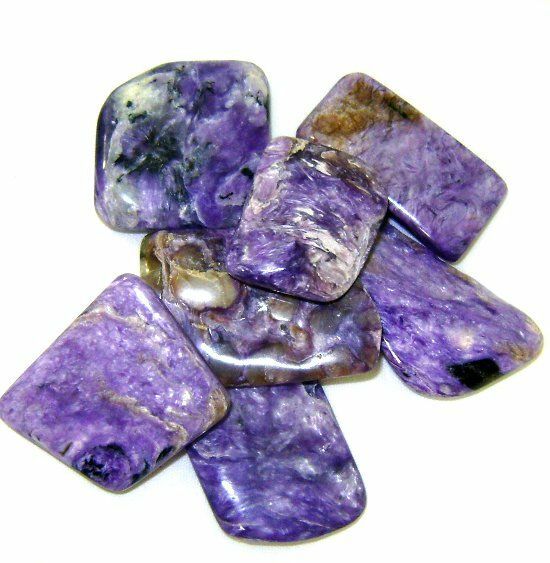 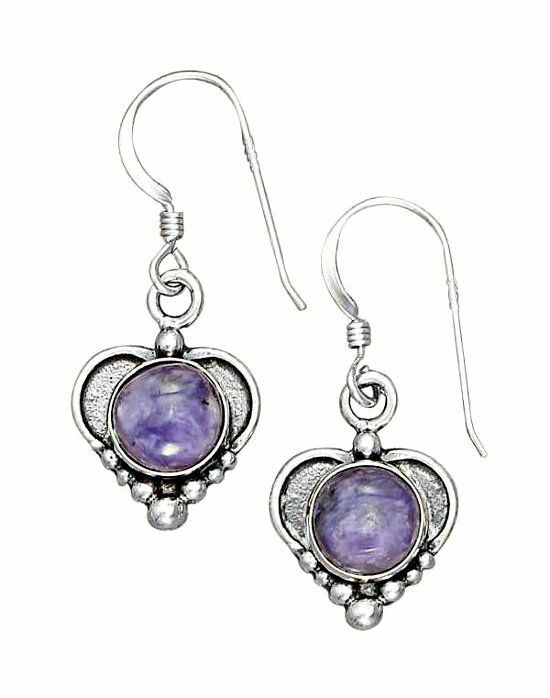 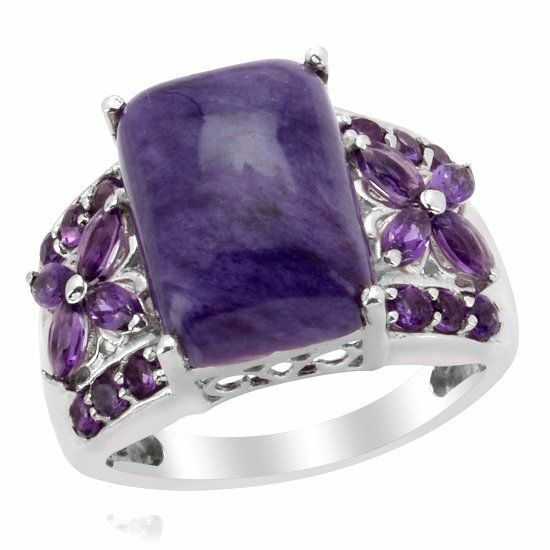 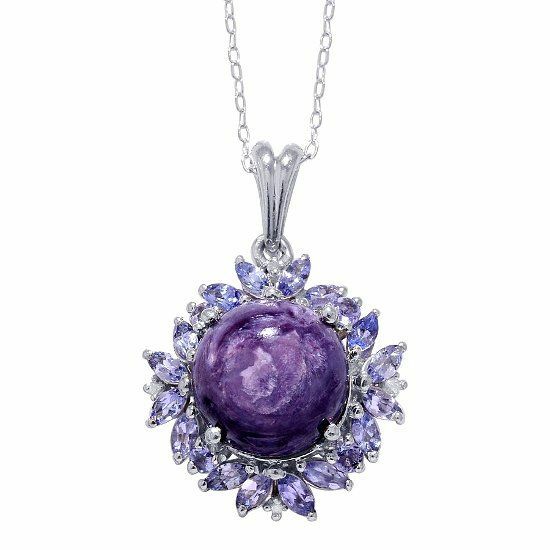 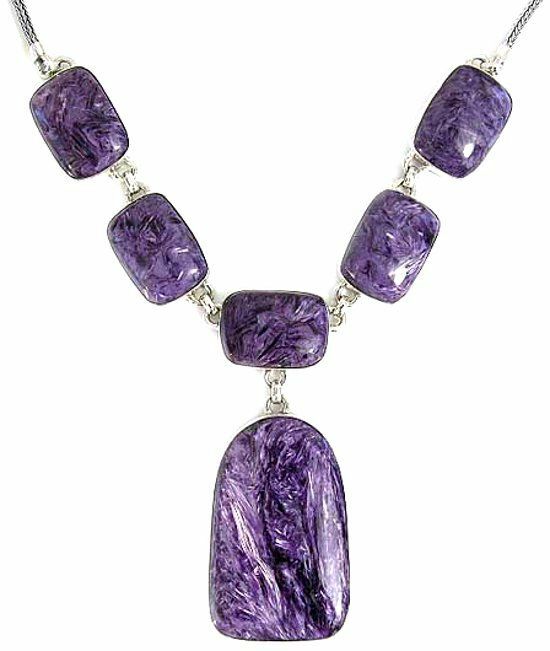