How to calculate the date of birth in different ways 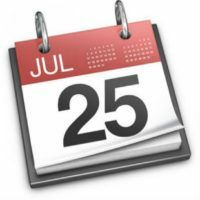 After learning about the onset of pregnancy, a woman is often interested in the estimated date of childbirth( PDR).Special methods based on statistical data and features of female physiology help to calculate it. To do this, you need to know the day of conception or the onset of the last menstruation. At later dates, PDR can be determined by ultrasound diagnosis.

Basically, the definition of PDR is made from the beginning of the menstrual cycle, in which the fertilization took place, that is, from the first day of the last month. By the same principle calculators of pregnancy and childbirth work - automatic calculation services on the Internet.

In obstetrical practice it is considered that a normal pregnancy lasts about 280 days( 40 weeks) with possible deviations up to 2 weeks in one direction or another.

In this case, the beginning of pregnancy is counted from the first day of the last monthly period - from the moment when the egg is born, which after two weeks of maturation in the follicle leaves the ovary( this process is called ovulation), fertilizes the spermatozoon and reaches the uterus on the fallopian tube, where it is attached to the organ wall anddevelops as an embryo.

That is, the PDR is calculated by adding 280 days to the date of the first day of the last menstruation. For example, if the last monthly period began on April 10, the estimated date of delivery will be scheduled for January 16th.

Knowing the approximate time of conception, a woman can use a special pregnancy calendar. It is a methodical guide or an Internet resource that tells future mothers about the formation of baby's organs in a certain period of time, reminds you about the need to take tests at any time, informs about the benefits or harms of various products.

For this calculation, use the method invented by the famous German obstetrician Franz Karl Negele. Calculation is made by the date of the last menstruation, to which it is necessary to add 7 days and take 3 months.

For example, if the last menstruation occurred on April 10, adding 7 days, it will be April 17, and taking 3 months will be January 17.That is, the preliminary date of delivery is January 17 of the following year.

The formula can be used by women with a regular cycle lasting about 28 days.

By the date of ovulation

The method allows to determine the embryonic period of pregnancy. If you know the date of ovulation, you need to add to it 266 days and get a preliminary date of delivery. The day of ovulation can be calculated at home - by measuring the basal temperature or using test strips.

For example, if ovulation occurred on March 5, the PDR is set for November 26.

For most healthy women, conception time is possible only for 5 days a month - during the period of egg release from the ovary, approximately from 12 to 16 days of the menstrual cycle. Therefore, this method of calculation has some error.

According to the date of conception

In case the woman knows exactly the date of sexual intercourse, during which conception occurred, the calculation of PDR is made in the same way as in the method with ovulation - 38 more weeks should be added to the conception day).The possible error of 3-5 days is due to the period of sperm life in the body of a woman.

Ultrasound examination allows you to accurately determine the size of the fetus and its age, according to which the preliminary date of birth is established. However, the intrauterine development of the child is uneven, so the DA according to the results of ultrasound in the first, second and third trimesters of pregnancy may be slightly different.

Following the results of the inspection

Becoming on the account of pregnancy, a woman is examined by a gynecologist. At small terms, the uterus is not probed through the abdominal wall, and manual obstetric examination is necessary. By the size of the body, the doctor can determine the approximate gestational age, and set the PDR:

The method is less accurate than the previous ones. It is based on the fact that the stirring of the child is felt by the mother approximately in the middle of the term. In the case of a second or more pregnancy, a little earlier. To calculate the PDR by the date of the first stirring of the baby add 4 months and 15 days.

For example, if the mother feels the first tremors of the child on June 10, then the preliminary day of childbirth is October 25.

The error in this calculation is 10-14 days. However, the method is informative for an unplanned pregnancy.

Reasons for inaccuracy in the calculations of

The calculated date of birth is always preliminary - no one can determine the exact time of the child's appearance.

The following factors can affect delivery:

In general, the discrepancy between the real and estimated date of birth for a healthy woman is no more than 3-5 days.