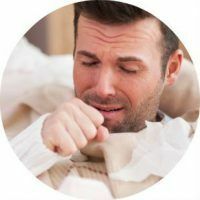 Mucolytics are the means that help cope with dry cough, the action of which is aimed at diluting the thick sputum secreted by the respiratory system. The list of drugs in this group is large enough, and each of them has different mechanisms of action, so the drugs should be prescribed by the doctor, based on the cause and severity of the disease.

Mucolytic drugs are manufacturedin the form of syrups, tablets, solutions, capsules and granules. The choice of medication and its form is determined by the age of the patient and the severity of the disease.

Mucolytics are administered orally and in the form of inhalations.

Medicines for treating a cough are divided into three groups: mucolytics, antitussives and expectorants. Drugs of different groups differ in their effects, and therefore do not combine and are used in different situations.

Mucolytic drugs are used to treat a cough with thick, viscous sputum, resulting from bronchitis, tuberculosis and other diseases. They eliminate the nutrient medium for the formed mucus, dilute the secretions and prevent their adherence to the walls of the respiratory tract. Drugs in this group contribute to the elimination of the cause of cough.

Antitussive drugs, unlike mucolytic drugs, help with dry and unproductive cough, which can be caused by tobacco smoke, dust, rhinitis with leakage of excreted sputum into the bronchi, reaction to inhaled oxygen or after taking some medicines.

With the help of expectorants, the work of ciliated epithelium, responsible for the amount of secreted bronchial secretions, is restored and the sputum is evacuated from the respiratory tract. Drugs of this group, in contrast to the previous two, are used as ancillary in a complex of antimicrobial therapy. They do not eliminate the cause of the cough, but they facilitate the patient's condition.

Mucolytic drugs are prescribed for the treatment of:

Drugs effectively cope with dry cough, turning it into a damp and productive. Throughout the course of treatment, tablets and capsules should be drunk abundantly with water, weak tea, mors, or compote.

Restrictions on the use of

Mucolytics are divided into types according to the effect:

They are also subdivided by the method of affecting the direct( destroying polymeric mucus bonds) and indirect. The latter include drugs that alter the biochemical composition of sputum, increase the activity in bronchial glands, affect hydration, stimulate the gag reflex.


The composition of medicines are of plant origin and synthetic.

Traditionally, they include plant extracts, dry medicines, oils, herbal preparations. Mucolytics of this group have fewer side effects than preparations of artificial origin. They have anti-inflammatory properties, reduce mucosal edema and facilitate sputum evacuation. Each component of the drug purposefully affects the respiratory tract, for example, thyme removes perspiration and hoarseness, and the extract of ivy leaves exerts an expectorant effect. 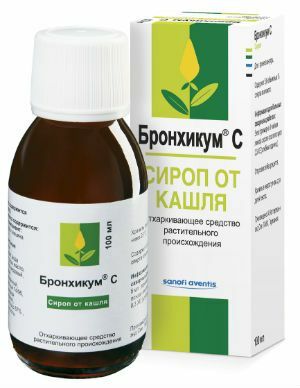 The active ingredient is an extract of thyme grass. Produced in the form of syrup, troches, elixir.

Has an expectorant effect, removes the mucous membrane of the bronchi, reduces inflammation.

Adults and adolescents are advised to take 2 teaspoons of syrup after eating 3 times a day.

Contraindicated in chronic heart failure, severe impairment of liver and kidney function, hypersensitivity to thyme. Bronchicum is not used to treat children under 6 years of age and treat patients with alcohol dependence. Not used during pregnancy and lactation.
to contents ^ Linkas 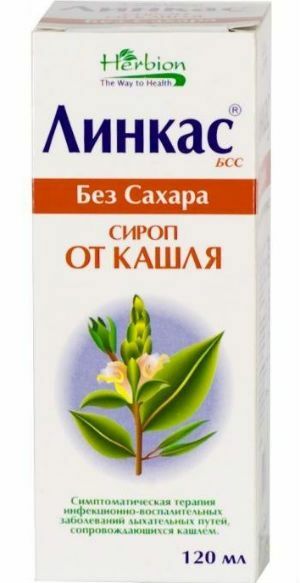 
The drug increases the productivity of cough, has an expectorant and mucolytic effect.

Contraindicated in children younger than 6 months of age and with hypersensitivity to the drug. It is not recommended to take during pregnancy and lactation.
to table of contents ^

It is prescribed for treatment of laryngitis, tracheitis or bronchitis individually depending on the characteristics of the disease and age.

Contraindicated in people with hypersensitivity to the althaea.
to table of contents ^ 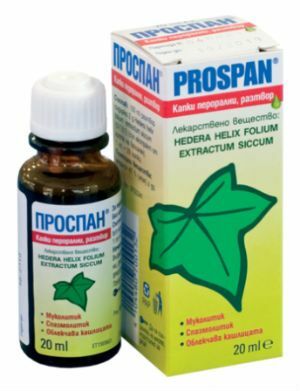 Active ingredient is an extract of ivy leaves. Available in the form of drops and syrup.

The drug is effective for acute and chronic inflammation of the respiratory tract, accompanied by a cough with hard-to-recover sputum.

Side effects: allergic reactions, a laxative effect is possible.

Contraindicated in fructose intolerance, sugar deficiency deficiency, hypersensitivity to components.
to the table of contents ^ 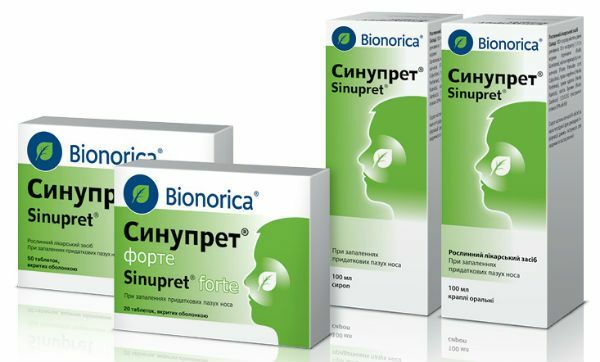 The drug has a mild effect and is easily tolerated. Thanks to herbal components, the drug helps to quickly remove sputum from the nasal sinuses and upper respiratory tract.

Adults are given a dosage of 2 tablets 3 times a day, school-age children - 1 dragee 3 times a day. The course of treatment lasts from 7 to 14 her. During pregnancy, the medicine is administered only as directed by the doctor.

Contraindicated in children under 6 years of age, with increased sensitivity to the drug components, deficiency of lactase, saccharase and intolerance to fructose.
to contents ^ 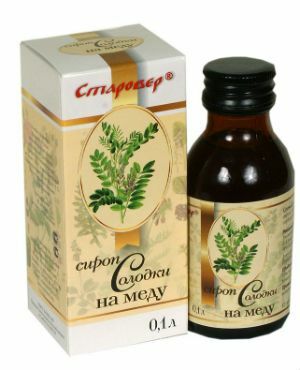 The product is intended for the treatment of diseases of the upper respiratory tract. Has an expectorant effect, also acts as an anti-inflammatory, immunostimulating, regenerating and antiviral drug.

The medicine is taken 1 tablespoon 3-5 times a day.

Side effects: increased blood pressure, the appearance of edema.

The components of these preparations are obtained by synthesizing, with their help, sputum evacuation is facilitated and facilitated. They also have a counter-toxic effect and regenerate the sectoral cells of the bronchi. 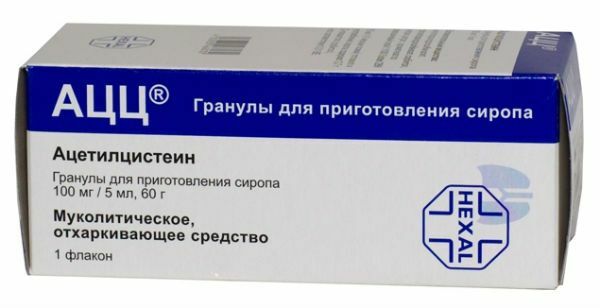 The active ingredient is acetylcysteine. Produced in the form of syrup, effervescent tablets, granules for dissolution, solution for injection.

Indicated for diseases of the respiratory system, accompanied by a thick, difficult to separate sputum.

Daily dose for the treatment of adults and children from 14 years to 400-600 milligrams.

Contraindicated in case of peptic ulcer, hemoptysis, during pregnancy and lactation, children under 14 years.
to contents ^

The active ingredient is bromhexine. Produced in the form of tablets, syrup and solution.

The drug is effective in tracheobronchitis, chronic bronchitis, bronchial asthma and chronic pneumonia.

Contraindicated in cases of hypersensitivity to bromhexine.
to table of contents ^ 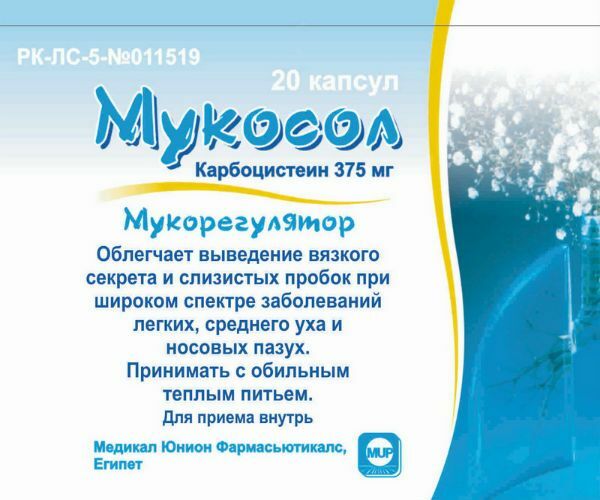 The active ingredient is carbocysteine. Available in the form of capsules and syrup.

Helps reduce mucus formation and changes its biochemical composition. The drug activates the production of enzymes in the cells of the bronchial mucosa, and also helps restore the mucosa after bronchitis.

Contraindicated in hypersensitivity, active peptic ulcer, acute cystitis, childhood under 2 years, in the first trimester of pregnancy.
to contents ^ 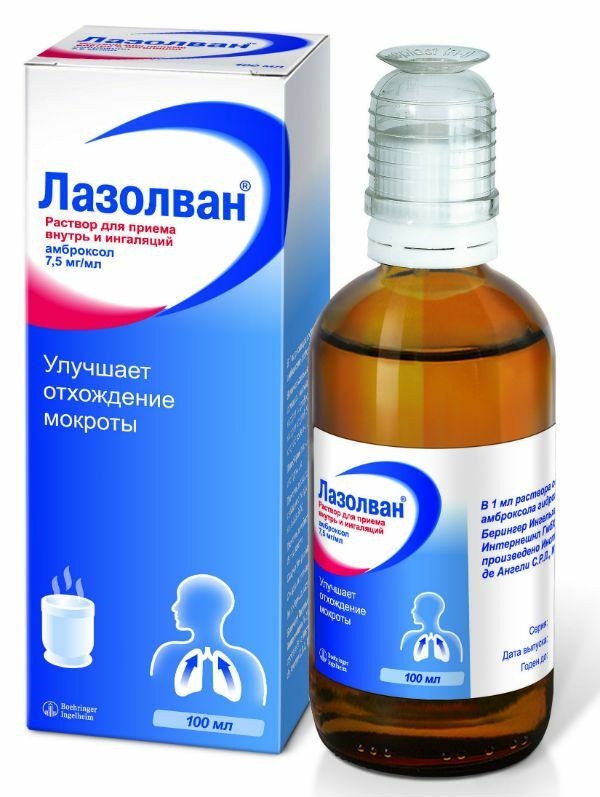 The active substance is ambroxol. Produced in the form of tablets, syrup and solution for injection.

The drug is effective for acute and chronic diseases of the respiratory system with dry non-productive cough, coughing of a smoker.

The drug is taken 1 tablet 3 times a day. With caution is prescribed in the 2nd and 3rd trimester of pregnancy.

Contraindicated in the first trimester of pregnancy, during lactation and children under 18 years.
to contents ^ 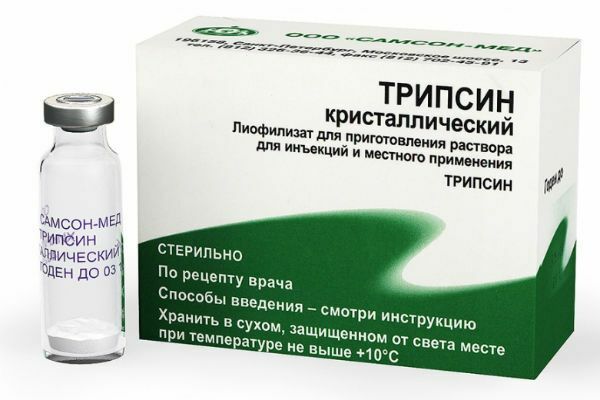 The active ingredient is trypsin.

Has a liquefying effect on viscous sputum secreted by respiratory system. The solution is administered intramuscularly or interpreterally with the help of aerosols and sprays.

Adults are assigned 0,005-0,01 grams 1-2 times a day, the child - 0,0025 grams 1 time per day. After inhalation, the mouth should be rinsed with warm water and the nose rinsed. During pregnancy, it is only used as directed by the doctor.

Side effects: allergic reactions, fever, pain at the injection site.

Contraindicated in heart failure, hypersensitivity, dystrophy and cirrhosis of the kidneys, pancreatitis, hemorrhagic diathesis.
to the table of contents ^

Children's preparations for dry cough are appointed with extreme caution. For example, drugs containing codeine are prohibited for the treatment of children under 2.5 years of age. To small patients the soft preparations prepared on the basis of grasses will approach.

Well helps with cough chest picks, as well as various inhalations, especially with soda. They actively moisturize and soften the baby's airways, making it easier to cough. The most suitable form of medicine for a child is syrup. Pleasant to taste and consistency, it does not cause dislike in the child.

Read also what antibiotics are prescribed for coughing adults and children http://woman-l.ru/antibiotiki-pri-kashle-dlya-detej-i-vzroslyx/
to the table of contents ^

Medicines for treating a cough duringpregnancy should prescribe only a doctor. The safest are the drops and elixir Bronchicum, licorice syrup, Bromhexine, Ambroxol and Carbocysteine.

The course of treatment will be more effective if you follow certain rules. For example, drink more warm liquids( tea, milk or compote), do respiratory gymnastics, do inhalation as directed by a doctor, avoid inhaling cold air and supercooling if possible.