What a child should be able to do in 5 months 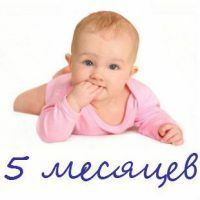 Continuing to grow and develop, the baby does not cease to amaze its happy parents. So, at the age of five months his small body becomes stronger and more obedient, and the movements are more clear and coordinated. At the same time, along with new physical skills, the first significant signs of the child's social development appear. His speech develops, the exploration of the surrounding world continues.

As before, the main indicator of the normal development of the baby is an increase in the weight of his body, changes in growth, the circumference of the chest and head. At the age of five months, it is normal to consider an increase of up to 700 g per month, so that by the age of five months the baby is normally between 6.3 and 6.8 kg. By this time, the weight of the baby's body is doubled compared to the mass at the time of birth. Significantly, by five months the child's height also increases: by about 2 cm in the previous month and by 13-15 cm from the moment of birth. Thus, the growth of the five-month-old baby ranges from 63 to 68 cm. The volume of the head during the fifth month of life in infants is increased by approximately 1 cm and is 41-43 cm at this age, and the chest volume is 42-44 cm.

The number of skills mastered by the baby is also increasing.

So, normally a five-month-old child should:

Due to the disappearance of hypertonic muscles, the movements of the five-month-old baby are becoming more concerted. He is preparing to learn a new important skill - crawling, and he needs to help. Good influence on the development of physical activity of the baby massage and simple physical exercises: extension and bending of handles and legs. Only 10 minutes of such exercises per day will give good and visible results.

The main warning for parents of a five-month-old baby is not to leave him on high open surfaces, because he has the ability to turn over, he can fall and be injured.

Actively develops in 5 months and small motor skills of the baby. So, its main achievement in this period of life is the ability to take objects by the precise movement of their tiny handles. Now the baby can confidently grab and hold the toys and other items available to him.

In addition, a five-month-old baby has an interest in adult food, and most importantly - the ability to swallow not only liquid, but also more dense food. This allows you to introduce a lure in the diet of a baby.

At the age of five months, the infant begins to understand much more than before. Now he deliberately chooses objects that he likes best, and confidently reaches out to them, even if for this it is necessary to overcome obstacles. The baby's speech skills continue to evolve, now he's been singing and singing for a long time, with his infantile singing enrapturing everyone around him and himself. Children really like listening to the sounds of their own voice.

In addition, a five-month-old child must:

The main social skill that babies acquire by the age of five is the difference between people "their" and "strangers".Many babies get scared and even cry at the sight of a stranger. At the same time, they are showing more tenderness and affection for their parents, especially to their mother. The five-month-old kid is very dependent on the emotional state of the people around him, so a quiet atmosphere is very important for him. He aspires to contact with people close to him, in every possible way tries to attract attention to himself and informs him about his desires by means available to him. At this stage, along with crying and smiling, the child expresses his emotions with different sounds and facial expressions.

Read about the development of a child in 6 months - http://woman-l.ru/chto-dolzhen-umet-rebyonok-v-6-mesyacev/

It is also important that a five-month-old baby more and more understands the meaning of sounds that hears,reacting differently to starting a car engine or barking a dog. He begins to recognize the sound of his name and turn his head when he hears it, and also react to the word "no."