Is it harmful to look at the moon - speculation and facts 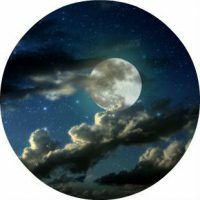 There are people who like to look at the Moon, others write poems about her, others do not miss the opportunity to walk in the moonlight. But there is an opinion that you can not enjoy the moonlight at all. Back in antiquity, some nationalities, who knew absolutely nothing about science and the cosmos, believed that the Moon exerts a negative influence on all living beings and other objects, because of this lack of education they often attributed to it magical properties.