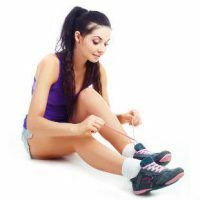 In order to make each look different, it is not necessary to buy several pairs of shoes, in the case of sneakers, for example, you can experiment daily with lacing options. Below are the most interesting and original ways of tying shoelaces. 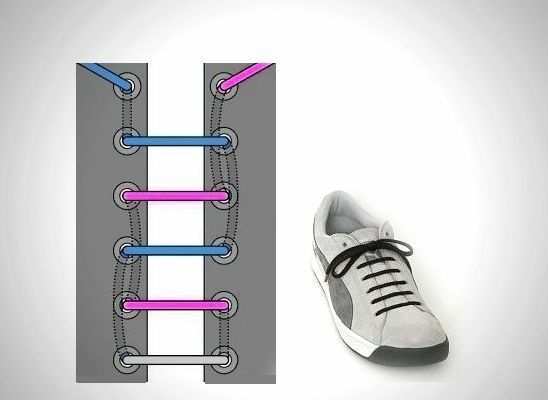 This embodimentis one of the traditional ways of lacing and is suitable for shoes with an even number of pairs of holes. Tie shoelaces need straight parallel lines along the entire length of the shoe. First you need to pass both ends of the lace into the holes and take it inside the boot. Then the right end is to be threaded into the right hole on the second row, pulling it out, and into the opposite left hole on the same row. Then the left end of the lace should be taken out to the left hole in the third row and thrown to the right hole on the same row. The right end must be inserted into the left hole of the fourth row by the end outward and to the opposite hole. In the given technique, lace up the shoes to the last row, tying the ends to the knot.

Direct lacing with a secret knot 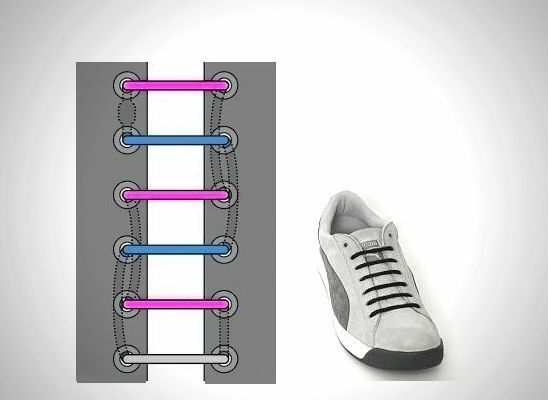 In this case, by typing the lace into the holes in the bottom row, the right end of the lace should be pulled out so that it is slightly longer than the left. Tie both ends of the lace in a straight lacing manner - first pulling up on the left side and threading into the holes, then leading to the right side so that along the entire length of the shoe lace creates straight parallel lines. In the very last row, leave the left end without lacing, and the right one lead out of the right hole and pass into the left one. Both ends should be on the left side of the boot. They tie them in a knot, and the loose ends of the lace are removed inside. In the picture, the dotted line shows the place where the knot should be tied. 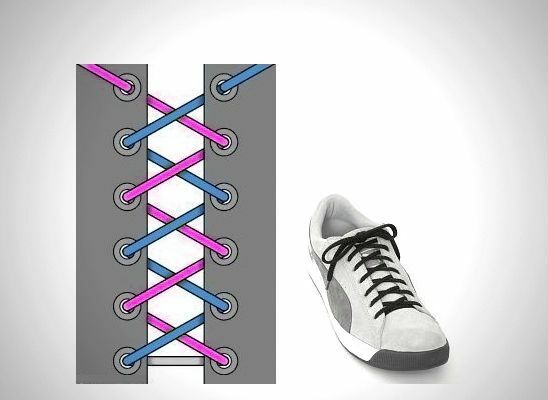 The most common variant is when the left and right ends of the lace cross each other along the entire length of the shoe. To begin with, you need to pass the shoe through the two lower holes and pull it out. Then toss the ends of the lace and insert into opposite holes. Thus, tie the shoelaces to the very last holes. The ends of the laces are knotted. This method is considered the easiest and most convenient. 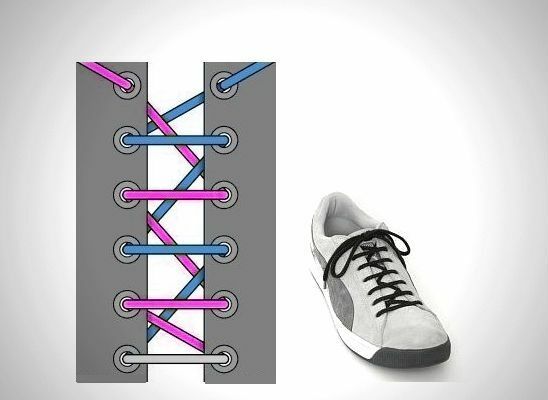 The next method is also called European straight lacing. In this case, the lace must be threaded into the bottom holes with the ends inward. Then, the left end is tossed to the right side and brought out, letting one hole through. Then pass it through the hole on the opposite side of the boot. The right end of the lace is put into the left hole, pulled out and thrown to the opposite hole. Then repeat the same actions as with the left end. Thus, straight lines will go from above, and cross lines from below. 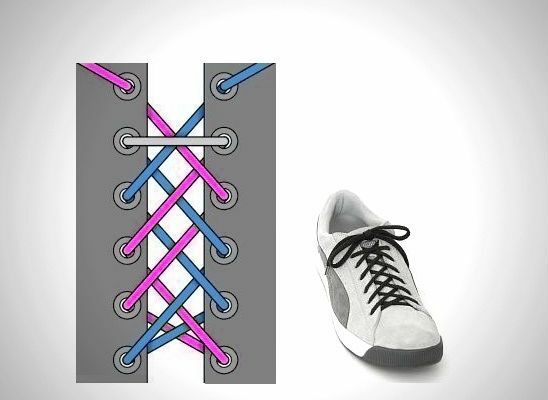 The presented method can only tie long shoelaces. Begin lacing from the upper holes. Pass both laces into the holes on the second row from the top with the ends inward and pull them down. Then throw outward, crossed with each other, and also pass the ends inside, passing one row of holes. After reaching the penultimate row, pull out the shoelaces inside, cross each other and thread into the holes. Then bring the ends out and repeat the steps from the beginning, now by tying the shoelaces from the bottom up. Connect the ends of the lace to the knot. 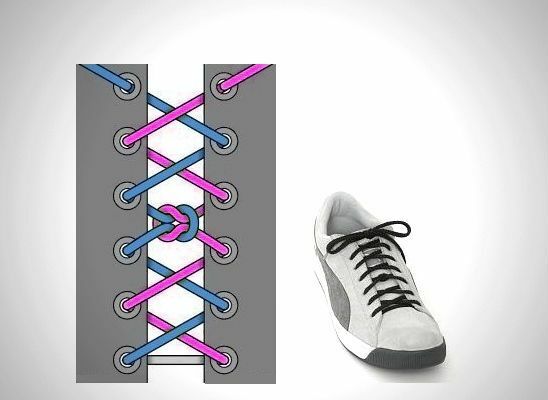 Lacing method with an unusual knot in the middle. This little trick increases the lacing strength. On the front row, thread the ends of the lace into the holes and bring them out. Then cross the shoelaces together and thread them into the holes of the upper row. Having thus reached the middle of the shoe, form a reef knot. It looks like a double knot: first tie a simple knot by placing the left end of the string over the right, then make the same knot on top only by placing the right end over the left knot. Continue tying the shoelaces crosswise until the last row. 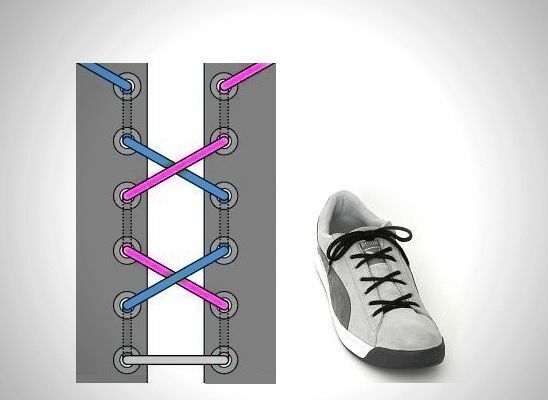 This way got its name because of the similarity in appearance with a bow tie. In this case, the laces go cross-wise outside the boot, and inside they are stretched straight lines up. To start, you need to pass the lace on the bottom row, passing into the holes with the ends inside. Then extend both ends vertically upwards, and take them out into the holes on the second row. Thus, a "gap" is formed on the lacing. Free ends to cross between themselves and pass into the next pair of holes. In this technique, lace up to the end. On the last row, tie loose ends with a knot.

Spiral-shaped lacing with a long diagonal 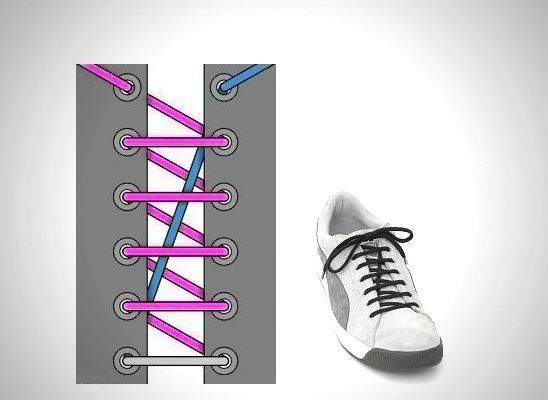 The lace is threaded into the holes of the bottom row, ends inwards. The left end must be considerably longer than the right end. Then the left end is thrown upward in the opposite direction and is output through the right hole of the uppermost row. The right end is pushed up into the hole on the left side of the second row. Then it must be put in the opposite hole on the right, and again stretch to the left hole already on the third row. Thus, the entire boot is laced up to the last row. The loose ends of the lace are knotted. 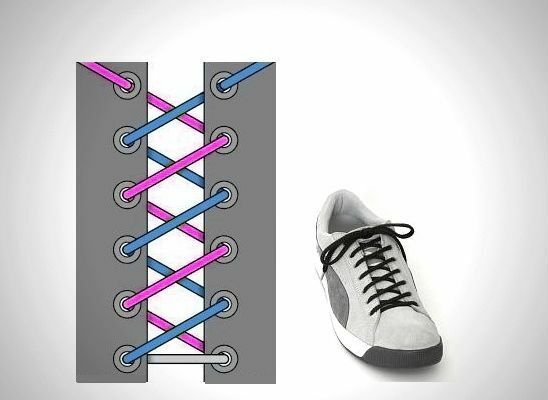 This is also a fairly simple way to tie shoelaces that do not take a lot of time. Pass the left end of the lace into the opening of the first row, pulling it out, and the right, on the contrary, letting it in. Then put the left end into the right hole on the second row, and the right end, respectively, to the left. Lace up the last row, thread both laces into the upper holes and pull them out, tying them into the knot. 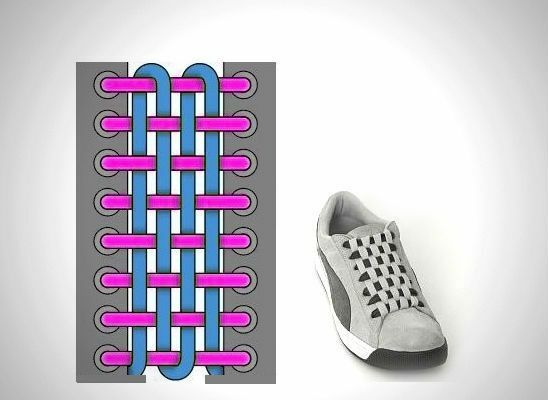 Quite an interesting and original version of lacing using two laces of different colors. For this method, you will need flat wide shoelaces. Pass the shoelace of one color into the holes of the bottom row and tie it to the end with the method of "straight lacing with a secret knot".Lace a different color through the resulting horizontal rows of a way weave, creating a kind of chess board. Tie the laces all over the surface in such a way that both ends are at the bottom, after which they must be hidden inside the boot. 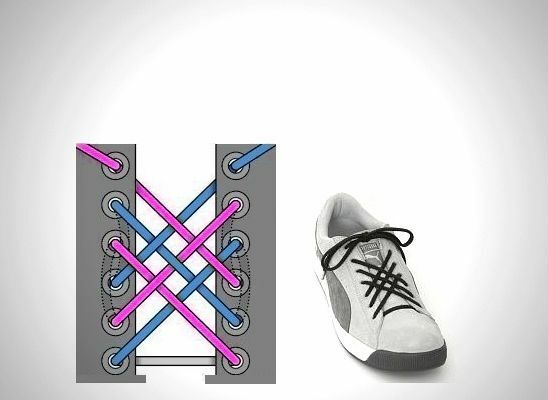 This method is suitable for shoes with a number of pairs of holes at least six. The ends of the lace are threaded into the holes of the bottom row and outward. Then they must cross between each other and pass through the holes, passing two rows. On the inside of the shoe, the laces fall down and pass through the openings of the second row, then again extend upwards. In this technique, you need to continue lacing up to the last row. The ends of the laces are knotted.

I love and constantly wear sports shoes, and now I know how to make it original. Every day you can tie shoelaces in a new way and look fashionable.