How to use verbal and non-verbal means in communication 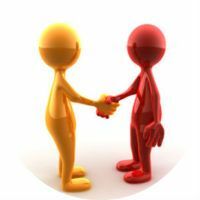 The life of a person in society is impossible without communication, for good reason these two words are so similar. Communication is both an exchange of information, a way of interaction, and a separate type of activity. Communication is the basis of interpersonal relationships. Verbal and non-verbal means of communication briefly contain the whole essence of successful communication.

Psychologists distinguish three basic functions of verbal communication: informational, expressive and the function of will expression.

The information function provides the ability to exchange information. Misunderstanding and misinterpreting information generates conflicts. Therefore, the ability to correctly and clearly formulate your thoughts is so important. What a person says can be clear to him, but his interlocutor is not clear. Often people who speak the same language put different meanings in the same words, and this creates problems in communication. The closer people have relationships, the less likely they are to face this problem. Knowingly about people who easily understand each other, they say that they "found a common language".

The expressive( emotional) function of is related to the possibility of emotional interaction. Language is rich in expressive and emotionally-colored words. Suffice it to recall the lesson of literature in the school: epithets, comparisons, hyperboles - all this contributes to the transmission of emotions through words. Without emotion, people would turn into robots, and speech would be like a technical reference book. The more accurately a person expresses his emotions with the help of words, the more he has the chance to be correctly understood.

The function of the 's will is related to the possibility of one person's influence on the behavior of the other. A skillfully said phrase can change a person's life. With the help of communication, suggestion and persuasion occurs. Parents are looking for the right words to persuade the child to behave well. Leaders communicate with their subordinates, trying to organize their work as efficiently as possible. And in that, and in another case the goal is one - to influence the behavior of another person.

Another common system for classification of functions of verbal communication:

Successful use of verbal means of communication is, first of all, the ability to correctly express your thoughts. In order to understand another person's speech, one must get rid of the words-parasites that make this understanding difficult, try to avoid the slang and colloquial expressions that can embarrass the interlocutor. Verbal communication should be consistent and logical. To do this, it is necessary to develop oratory skills, read more professional, artistic and journalistic literature, expanding your vocabulary.

The richer the speech, the more convincing and interesting it is. In addition, it is necessary to develop the ability to listen and hear the interlocutor. In business communication it is important to observe professional etiquette.
to contents ^

Mimicry - the movements of the muscles of the face - reflects the emotions of a person. Mimicry is universal for representatives of different cultures: people from the most remote corners of the planet are happy, sad and angry with absolutely identical expression. Mimicry and sight are the most difficult to control.

In its specifics, the view can be:

Pantomimika is a complex component of nonverbal communication, including such factors as:


Touching the is a kind of intrusion into someone else's personal space. Touching is allowed between close friends, family members and in an informal setting. In business communication, an acceptable touch can be a handshake. Handshakes are divided into 3 types: dominant( arm on top, palm deployed downwards), submissive( arm from below, palm upwards) and equal in rights.

The distance between the interlocutors shows the degree of their proximity. There are four intersubject zones: intimate( up to 0,5 meters), personal( 0,5 - 1,2 meters), social( 1,2 - 3,5 meters) and public( more than 3,5 meters).In an intimate zone very close people communicate, in a personal zone there is an informal dialogue, in a social zone - formal working relations, in public zone - performances before a large audience.

Nonverbal communication supplements, enriches, and sometimes completely replaces verbal. The very first films in the history of cinematography had no verbal accompaniment( the so-called "silent cinema") and everything that happened on the screen was transmitted at the expense of the movements and facial expressions of the actors. On non-verbal means of communication pantomime is constructed - a separate kind of scenic art in which actors play their roles using "body language".

To acquire non-verbal means of communication is more difficult. Most often people focus only on the verbal side of communication, ignoring their gestures, posture, facial expressions, pantomime. A person can talk about a good attitude, but the language of his body will be aggressive. A person can call himself confident, but his posture and facial expressions will betray his fears and doubts.

Talking with people, it is worth paying attention to gestures and postures. Well, if during a conversation hands are not hidden behind your back or in your pockets, but harmoniously supplement the conversation with moderate gesticulation. Open palms are perceived as a sign of trust. In business communication it is necessary to avoid closed, too tense or too relaxed poses. To maintain comfort in the conversation, it is important to keep the right distance. In business communication, the most appropriate distance between the interlocutors is from 1.2 to 3.5 meters.

Understanding someone else's facial expressions helps to understand the emotions of another person. Not always people are ready to talk about their emotions, but their facial expressions will show these emotions. Own facial expression is much more difficult to control than to notice someone else's. Therefore, the easiest way to master verbal and non-verbal means of business communication is to develop inner confidence and benevolence. Then both the speech and the "body language" will harmoniously complement each other.