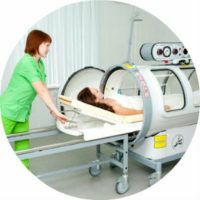 If oxygen enters the body inadequately, hypoxia develops - so in medical language is called oxygen starvation. To saturate tissues and blood with life-giving gas, various methods are used, among which the treatment with a hyperbaric chamber is not the last. But like any treatment, it has its pros and cons.

The pressure chamber is a large sealed capsule with windows, where for a certain period of time - from 20 minutes to an hour - the patient is placed. He does not have to do anything, just lie and breathe the air, sufficiently enriched with oxygen. In the pressure chamber are built sensors that define parameters such as pressure and the level of oxygen that enters the capsule - this is how oxygen is called in Latin.

Treatment in a hyperbaric chamber is called hyperbaric oxygenation( abbreviated as HBO).Translated into the universal language, this means saturation of the body with oxygen under pressure above atmospheric pressure. In carrying out this procedure, oxygen enters the bloodstream of the patient much more intensively than during normal breathing. And the blood carries it to all the "corners" of the body, which due to this activates the regeneration processes of each of its tissues: whether it is nervous or muscular, bone or cartilaginous, and so on.

Undoubted effect of HBO-therapy is marked by a very wide list of pathologies in which treatment in a pressure chamber is recommended. Indications for use of HBO concern the following ailments:

For all the recommended pathologies for treatment, there is a pressure chamber and contraindications for use, mostly associated with the respiratory tract.

This method should not be used if the permeability of the Eustachian tubes and channels through which the inhaled air enters the paranasal sinuses is impaired. This may be due to the presence of polyps, inflammation of the upper respiratory tract, middle ear, and developmental anomalies.

GBA - abbreviated designation of the method of hypobaric adaptation. It is aimed at stimulating the defenses and reserves of the patient's own organism. What is its essence? In the pressure chamber creates a lower atmospheric pressure, as if imitating the mountain air, which allows you to train baroreceptors - the end of nerves located in the vessels and reacting to changes in blood pressure. During the session, the patient inhales a much larger volume of air, while the oxygen level in the blood rises, due to which the respiratory organs, the cardiovascular system work better, the fat metabolism normalizes, the immune system is strengthened.

Do not interfere with the use of GBA and healthy people, especially those who are burdened by risk factors for coronary heart disease and hypertension. This will improve the movement of blood along the vessels and the general condition. Among the indications can be called GBA-therapy as a means to improve the effectiveness of the sports training process.

In patients who have undergone the course of GBA, the underlying disease is much less likely to recur and aggravate, they are much less likely to resort to medical treatment. This increases the performance - both mental and physical, reduces fatigue. The organism acquires resistance to unfavorable factors.