Description of diseases of strawberry. Prevention and treatment

Strawberry is a tasty and healthy berry. Love it, and children, and adults. Probably, every horticulturist has on the plot a garden with this fragrant berry. But to get a good harvest, you need to know how to properly care for your plants, what are the diseases of strawberries and methods to combat them. 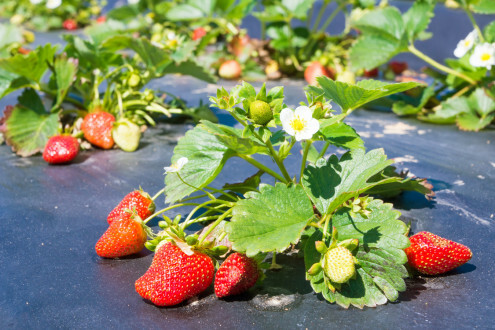 Basic rules for the prevention of

With almost every horticulturist, you have to face a variety of strawberry diseases. To exclude the occurrence of diseases in your area, you must perform the following actions:

In addition, experienced gardeners twice a season make preventive treatment with fungicides: before harvesting, and then - after.

Diseases of the leaves

When berries are not yet formed, the presence of the disease of strawberries can be judged by the state of its leaves. For example, they can become covered with stains that look like rust, whitish plaque, red or brown blobs. For one reason or another, experienced gardeners can determine exactly which disease has "attacked" plants.

The first signs of the disease are brown leaves and petioles of the plant, the formation of necrosis on the edges of the leaf and its wilting. In the run-up stage, the rosette disintegrates and, as it were, pressing the bushes to the surface of the earth. Complete destruction of the bush comes in a month and a half. 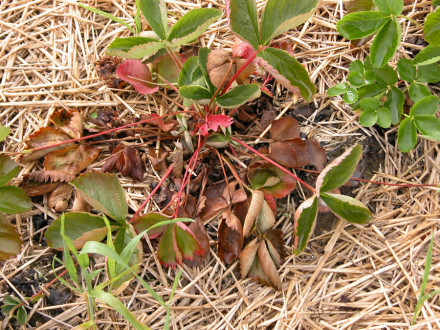 The first rule to combat any type of strawberry wilting is adherence to agricultural technology.

If the strawberry on the plot fades permanently, then it is recommended to stop the selection only on resistant varieties.

This fungal disease of garden strawberry is peculiar, first of all, for temperate and subtropical latitudes. The peak of disease activity is observed in August - October. Active fungus reproduction can begin at any temperature above zero degrees.

In severe frosts, the fungus does not die, but remains in a resting phase. Especially active growth is observed with high humidity. Brown spotting leads to a significant reduction in vegetative growth and yield in the next season. 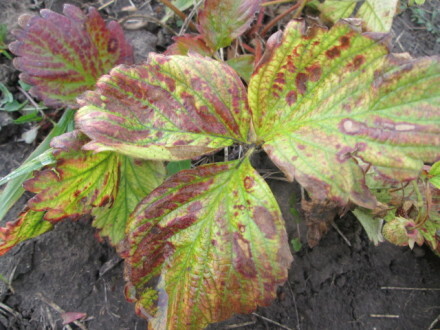 The main feature is the presence of dark purple spots on the leaf surface. Over time, the spots become brown or red.

Since other diseases can also be characterized by the appearance of spots on the leaves, it is necessary to know that when there is a brown patch there are no white dots in the center of the lesion. Each affected area almost always has the same color. In the event of an increase in the number of spots, gradual drying and leaf withering should be expected. 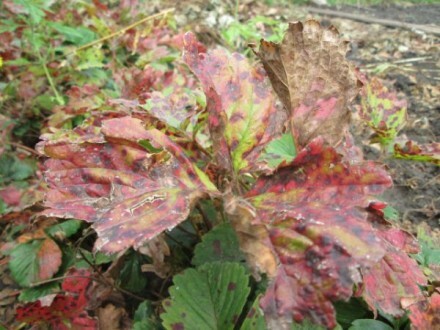 Appearing on the leaves, the brown spot on the strawberry is gradually selected for all tissues and plant organs: to sepals, fruits, stems, peduncles. The following symptoms will indicate the total damage of the plant:

To avoid this fungal disease of strawberries, it is necessary to regularly drain the ground around the bushes, pick up disease resistant varieties.

The presence of such a fungal disease of strawberry, like powdery mildew, is fraught with a decrease in yield by 60%.The berries, infected with powdery mildew, become less sugary, wrinkled, bitter and non-transportable.

The initial stage of the disease manifests itself in the appearance on the leaves and flowers of small mealy spots. They can be easily erased with your fingers, but after a while they reappear. Gradually increasing in size, such spots acquire a rich gray or purple color. Then the compaction of the mycelium takes place, it turns brownish. 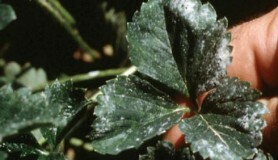 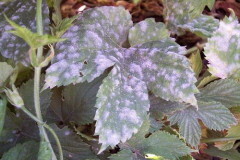 The leaves are completely covered with powdery mildew

The presence of mealy coating can be seen on both the top and bottom of the leaf. Progressing disease leads to the gradual drying, withering and falling of leaves, flowers and buds. The plant stops growing.

It should be remembered that there is also such a phenomenon as downy mildew. To prevent its appearance, it is recommended to use Bordeaux liquid or preparations replacing it - Ordan, Ridomil Gold MC, Previkur, Acrobat. Preventive spraying is carried out at least three times. 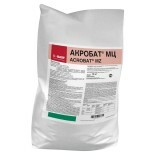 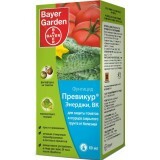 Most often, the presence of such a fungal infection can be found on old leaves. With dendrofomose, red leaves with large spots are formed on the plants, the diameter of which can reach 2 cm.

After a while after the redness and spots appear on the leaves, small black fungal fruiting bodies form in the lesions. Most often, such spots are located in the V-shaped space from the middle veins of the leaves. 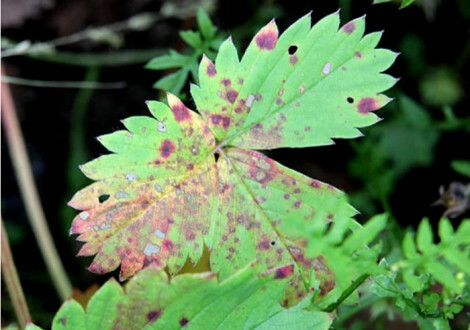 The disease leads to the complete withering of the affected leaves, and then the whole plant. In the initial stage of the disease, a significant decrease in yield is observed.

For treatment it is necessary to use preparations containing copper, and Trichodermine.

White spot of strawberry leaves in most cases does not lead to the death of the plant, but is dangerous because it can significantly worsen the appearance of the berries.

The disease affects the outer side of the leaf: it appears small dark spots with a white dot in the center. The edges of the spots are colored purple. If a large number of such spots are concentrated on the sheet, they can expand, merging into one.

White spotting affects not only leaves, but berries. The symptom of the disease is the formation of black spots on the strawberry, which are localized in the region of the bones. Over time, the disease extends to the soft tissue of the berry, and on its surface a black-brown skin is formed.

Despite the fact that the flesh of the affected berries loses color, decay with this disease does not occur. As a rule, white spotting affects strawberries after heavy rains. 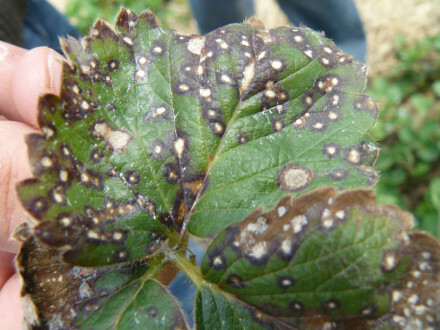 To prevent the onset of this disease on the leaves of strawberries, it is recommended to use spraying with means containing copper or systemic preparations. Such preventive treatments should be carried out several times per season.

Brown spot is also called angular. The cause of this disease can be different pathogens, for example, the bacterium Xanthomonas fragariae. With a brown patch, a significant loss of yield is observed - 10-30%.

To identify this pathogen it is necessary to carry out special serological tests and PCR, therefore it is rather difficult to determine the presence of this disease.

The underside of the leaf is covered with saturated, watery, deformed spots localized between the veins of the leaf.

Some time after the appearance of the first, similar ones begin to form on the upper surface of the leaf, representing irregular red-brown spots, gradually fused to necrosis.

This stage is characterized by the fact that the brown spot on its symptoms may resemble a white or brown leaf spot. Gradual drying and breaking of the affected part of the leaf occurs.

When the disease is started, identification of the pathogen is only possible at the lower edges of the young leaf. In very high humidity conditions, it is possible to consider the underside of the affected leaf in order to detect a sticky bacterial exudate, the presence of which will indicate that the plant is affected by a brown patchiness. After the bacterial exudate dries, it turns into a whitish-scaly film.

The disease also affects the berries themselves: their sepals dry up, and the berries do not have time to grow to the right size and ripen, become tasteless. The infection spreads with droplets of water falling on the plants during rain or watering.

Disease is dangerous because bacteria can hibernate in old fallen leaves, and with the onset of spring again spread to already healthy plants. Therefore, after planting new plants on the infected area, brown sheets can be seen again on the plants. 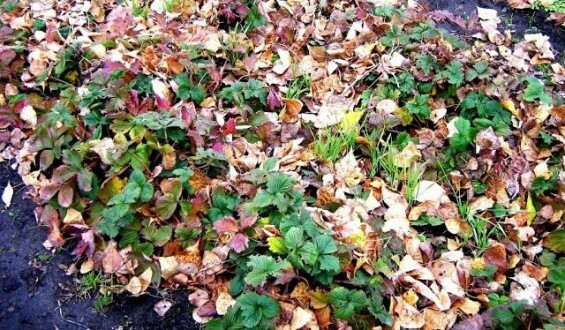 Care should be taken to use nitrogen fertilizers that promote the spread of brown spots. It is necessary to regularly spray the area with strawberries in such a way that the substance falls on the underlaid zone. As a preventive tool, it is recommended to use drugs that contain copper.

If the gardener missed the moment and did not take appropriate preventive measures in time, then at the stage of fruiting, unpleasant surprises may await him.

This harmful disease of strawberry plants leads to crop losses of up to 20%.Almost all organs of plants are affected by the disease, but berries suffer particularly badly.

It is necessary to use healthy seedlings, observe the crop rotation and watering regime. Spray before flowering Ridomilom, Metaksilom, Quadrice.

This disease causes the fungus Botrytis cinerea. It occurs quite often and is the main cause of strawberry disease. Gray rot leads to loss of yield by 50%, and in some cases this figure can be much larger. 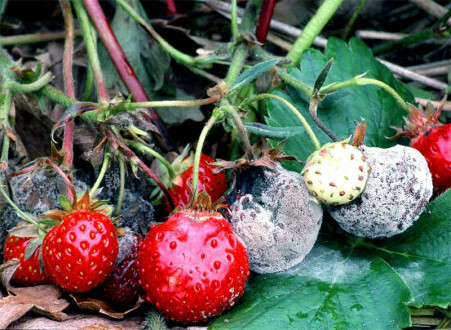 A provoking factor for the development of gray rot is long rains during hot weather. It should be borne in mind that the disease can originate even at the stage of flowering plants. Gray rot leads to wilting flowers, rotting still immature, as well as already ripe berries.

On the affected parts of the strawberry berry there is a blurred gray mass of fungus spores.

This disease can develop if strawberries are grown on a black film in conditions of insufficient aeration of the roots. Anthracnose is dangerous because gardeners lose up to 75% of the crop. The greatest activity of the fungus is observed in warm wet weather. The stalk, root, foliage, shoots and the berry itself are affected.

The first sign of the disease can be the formation on the berries of lesions of light color resembling wet spots with a diameter of about 0.3 cm. Over time, the spots become brown and spread over the entire surface of the fetus.

Copper-containing drugs with this disease are ineffective. It is recommended to carry out treatment with Haupsin, Trichodermine or Kaptan.

Do not think that strawberries do not require special control. Ignoring the basic rules of caring for this plant can lead to partial or complete loss of crops, as well as to the death of the seedlings themselves.

To ensure that the site annually generates you with generous yields, you must adhere to the above recommendations and closely monitor the health of plants.

How to properly process strawberries in spring with Bordeaux fluid - video

5:01
DOLGONOSIC - methods of struggle and prevention 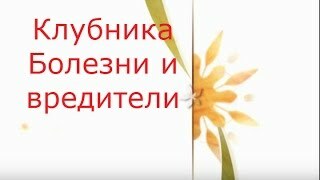 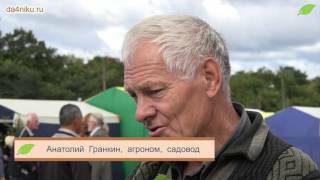 3:26
Pest and disease control of strawberry