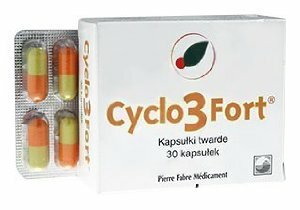 Cyclo 3 Fort is a drug that treats chronic lymphatic insufficiency after injuries and surgeries.

Composition of the preparation

In one capsule is:

The drug has a positive effect on strengthening the tone of the veins and the capillary, with the direct stimulation of postsynaptic adrenoreceptors of smooth muscle cells in the vessel wall, directs the norepinephrine released from the nerve endings to action with the walls of the vessels.

Cyclo 3 fort increases venous outflow and capillary stasis does much less, prevents the formation of blood clots in the blood and makes it less viscous.

The drug affects the walls of the arteries, but does not affect the changes in blood pressure. The product is excellent for treatment during and after surgery.

What causes venous congestion - the causes and main risk factors. What methods of therapy are there?
loading. ..

When varicocele will help microsurgical revascularization of the testicle - what are the features of the treatment and how is the preparation for the procedure carried out?

After using the Cyclo 3 Forte drug for 2 hours, the blood level of the glycosides of the needle and hesperidinum methylchalkone is maximized in the blood.

The drug begins to act after 2 hours after consumption and lasts about 6 hours, having a therapeutic effect on the cells and muscle tissue of the vessels.

The drug is recommended for people with diagnosed chronic venous and lymphatic insufficiency, during which convulsions, pain, leakage and heaviness in the legs occur. 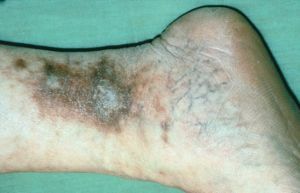 When can not take medicine

The drug should not be taken by a minor, as well as those who have personal intolerance or hypersensitivity to the components of the drug.

For chronic lymphatic or venous insufficiency, as well as for uterine bleeding, the drug should be taken one capsule 3 times a day.

Average daily dose of the drug - 4-5 capsules .The capsule is taken with a lot of water, or, in case of nausea, stomach pains or diarrhea is taken with food.

Cyclos 3 fort is available in yellow capsules;in a cardboard box there are 3 blisters;in the blister - 10 capsules.

No drug overdose has been observed.

In 1-2%, there may be diarrheal disorders - stomach pain, nausea, or diarrhea. With diarrhea, the course of treatment with the drug ends immediately. With the use of alcohol, some components of the drug may worsen its effectiveness, and further treatment will not have positive results.

Use with other drugs is permissible, no side effects are noted. The drug can be consumed by pregnant and nursing mothers within the limits set by the doctor.

No special precautions are taken;there are no indications to the account of taking the drug.

It is not recommended to take medication for children under 18 years of age, or under the strict supervision of the treating doctor.

Opinion of Doctors and Patients

This is what the doctors who practice the use of Cycloe 3 Fort for treating patients, in their responses, point out.

The medicine does have a curative effect on those suffering from varicose veins, hemorrhoids or suffering from bleeding. In the postoperative period, doctors prescribe the drug to the sick.

The drug can be consumed by pregnant women and during lactation, but it is not desirable and under the supervision of doctors. The drug should be taken strictly according to the prescription so that there is no overdose or side effects, it is best to take before meals, drinking a glass of water.

The drug treats varicose insufficiency, improves the permeability of the vascular walls and increases the tone of the veins, reduces effusion and normalizes blood circulation in the vessels.

Patients under observation at the time of admission did not complain and were not exposed to side effects, even while taking other medications.

The only drawback is that it starts to act not immediately, but after 2-3 hours( depending on the neglect of the disease).

Our readers recommend!
For the treatment and prevention of varicose veins and hemorrhoids, our readers use the method first voiced by Malysheva. Having carefully studied it, we decided to offer it to your attention. Opinion of Doctors. .. »

Taking Cyclos 3 fort during pregnancy is acceptable, but it's best to eat it with food so that there is no nausea.

In pharmacies do not want to give the drug without a prescription to pregnant and breastfeeding women, but do not deny that you can drink it during this period.
The medicine can be taken and children.

After the injury, doctors prescribe some medication for some children, so that it fuses and heals faster, the main thing is not to exceed the dosage indicated by the doctor. There were no side effects, the treatment was successful.

Clear results of treatment become noticeable after a week of intensive course of taking the drug. The flow disappears, the veins cease to be too prominent, the heaviness and pain disappear.

After 5 months, and did not need to use the drug - the result on the face, the disease was cured. The drug is relatively inexpensive, and effective, that is, in fact the price pays off by a healthy body.

Pros and cons of drug 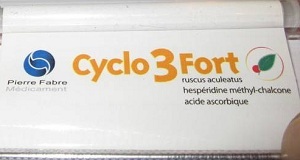 The minus of the drug is that it does not immediately have a therapeutic effect on the body, but after a certain period.

The components of the drug begin to function 2 hours after the capsule is used, and the first notable improvements are visible after a week.

The minimum course of treatment is 1 month, the maximum is allowed to use the drug for six months. Side effects and effects on the kidneys and other organs are still unknown.

The drug is effective enough, it can be consumed during pregnancy and lactation, it can be taken by children and adults who survived trauma and suffer from uterine bleeding from a woman. Also, the drug works perfectly during hemorrhoids.

Also, the use of Cyclo 3 Fort does not require dietary nutrition or refraining from taking other medications. The drug is available without a doctor's prescription.

No cases of ineffective drug treatment have been observed.

The drug is available in any pharmacy and is relatively inexpensive. One package is enough for a week or more, depending on the indicated mode of use and dosage.

Price Cyclo 3 Fort - about 600 rubles .Store in a place that is inaccessible to minors at room temperature( 0 ° C to 27 ° C).It is issued in any pharmacy without a prescription.

How to replace the medicine?

Effective analogs of the preparation: