The hymen is a small area of ​​the mucous membrane (hymen) that anatomically closes the girl's entrance to the vagina. It is torn during the first sexual intercourse, normally there is a special hole in it, which serves as a kind of drainage for the release of vaginal discharge. Atresia of the hymen - its complete closure or infection. As a result, the entire secret from the vagina stagnates in the cervical canal. The process is considered pathological in gynecology and serves as an obstacle to the onset of sexual activity and, as a result, conception.

What is hymen atresia

Infection of the hymen is, in fact, congenital in nature, when a female representative from birth does not have a hole in the hymen. This, in turn, leads to problems in the further development and general condition of the girl. The vaginal secret, which accumulates at the exit, stretches the walls and puts pressure on the organs located nearby.

Infection of the hymen usually causes other pathological conditions. For example, it leads to the accumulation of menstrual blood when girls begin their first period. 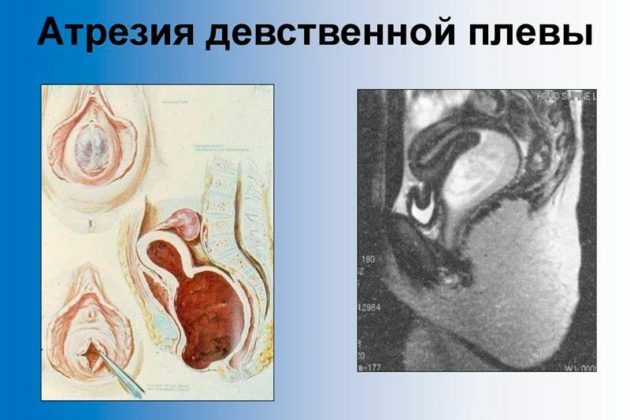 Most often, atresia manifests itself in adolescence, when, during the first menarche, the accumulated blood causes severe pain.

Causes of atresia of the hymen

The causes of the appearance largely depend on the type of pathology:

In rare cases, there is a so-called secondary infection of the hymen in patients who are sexually active. The overlap of the entrance to the vagina with a hymen in this case occurs as a result of the transferred inflammation of the pelvic organs in an acute form. With this type of atresia, the connective tissue can completely block the cervical canal.

Symptoms of atresia of the hymen

The symptomatic picture of primary atresia is especially noticeable in adolescence, when the first menstrual bleeding occurs. Main features:

Warning! Inaction during the infection of the hymen leads to the fact that menstrual blood gradually fills not only the vaginal cavity, but also the uterus, as well as the fallopian tubes.

As an additional symptom, a violation in the functioning of the urethra can be considered. This is due to the pressure exerted by a crowded uterus on nearby organs.

If there is no clinical picture in girls at an early age, then diagnosing hymen atresia is very difficult. You can notice the pathology by the presence of mucocolpos - a bulging of the hymen between the labia. 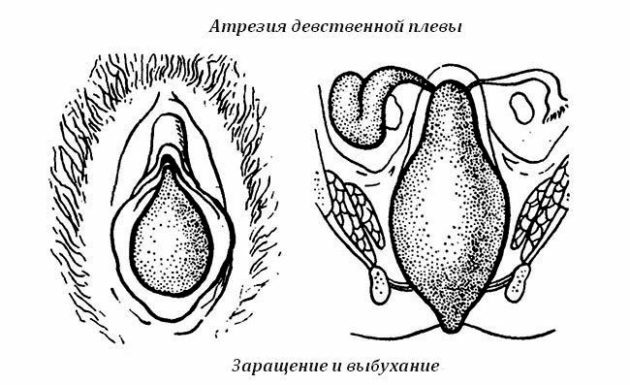 On examination, a pediatric gynecologist will notice atresia in the form of a tumor of a gray-blue or yellowish hue, the size of which does not exceed a pigeon's egg

In adolescent patients, the reasons for visiting a doctor with suspected atresia are as follows:

The gynecologist uses the following diagnostic methods to identify and confirm hymen atresia:

Warning! It is possible to determine the protrusion of the hymen, as a rule, only after the onset of the menstruation cycle in a girl.

Treatment of atresia of the hymen

Therapy for hymen atresia is exclusively surgical in nature, when an artificial hole is created in the fused area for drainage of secretions. Usually any of three types of manipulations are used:

The third method provides for the obligatory sheathing of the edges of the cut hymen with ligatures. This is necessary in order to avoid re-atresia.

The choice of treatment tactics directly depends on the age of the patient and the condition of the vagina, uterus and fallopian tubes. If the blood is in distant organs, and not only in the cervical canal, a laparotomy is preliminarily performed. To exclude the attachment of infection, after surgery, it is important to refuse for a long time from the use of tampons, douching is prohibited, and temporary sexual intercourse is required. peace.

The main complication with advanced atresia of the hymen is the risk of developing an infectious lesion, as well as the development of pyoghematosalpinx.

As a preventive measure for the abnormal development of the hymen in the womb, the following actions are considered:

To prevent the secondary development of hymen fusion, it is important to monitor the condition of the girl from an early age. age, especially if a disease such as vulvovaginitis and other infectious diseases was present defeat. 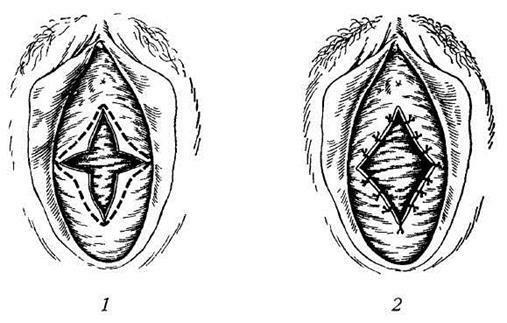 If hymenotomy is performed professionally and in a timely manner, relapses of atresia are usually excluded.

Atresia of the hymen is its pathological overgrowth, as a result of which it there is no anatomically provided opening for the release of secretions and blood during menstruation bleeding. The diagnosis may be primary or acquired. The disease requires mandatory surgical intervention, which is the artificial creation of a hole in the hymen or its complete excision.