Symptoms and methods of treatment of rotavirus infection in children 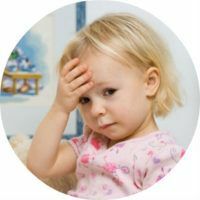 While the child is still small and does not interact with a large number of people, he is practically not sick. However, if the kid goes to a kindergarten or if he has older siblings attending organized children's groups, as a rule, various illnesses do not keep you waiting long.

Rotavirus is a family of viruses from the family of Reoviruses. The name "rotavirus" comes from the Latin word "company", which means "wheel", which these viruses resemble by their form. In total, this genus includes 9 viruses( A-I), of which a person can become infected with three( A, B, C), and most often one( A) - in 90% of cases.

Rotaviruses reproduce in the human intestine and at the same time affect the epithelium, resulting in the development of a specific symptomatology, characteristic of rotavirus infection. This virus is the most common cause of diarrhea in children, especially in organized groups.

Rotavirus disease occurs flare-up, with the virus becoming active during the cold season. Children are mostly infected with virus A, while virus B is called the "adult diarrhea virus".

Basically, rotaviruses are carried by a fecal-oral mechanism, that is, through dirty hands and touching contaminated surfaces, but an airborne way of transmission from an infected person to a healthy one is possible. Children over one year of age usually get infected in children's organizations - kindergartens and schools.

Rotaviruses do not perish by hitting the environment, and can persist there for a long time. They are also insensitive to low temperatures. And the usual sanitary and hygienic measures that are applied against other bacteria and viruses do not affect rotavirus. Therefore, outbreaks of rotavirus infection occur both in countries with a low sanitary level, and in those countries where health care is significantly developed.

In organized collectives, the spread of infection can occur not only through contamination of the virus with various surfaces, but also through food. As adults also get sick( and may also be asymptomatic vectors), they can infect foods by participating in their preparation.

The virus in fermented milk products is especially well preserved. Kill the virus can only boil foods at +100 degrees Celsius, but such food processing does not meet the technological requirements for its preparation.

In addition to food, you can get infected through water if the virus has got into it already after boiling, or it did not boil at all. Chlorination of water and chlorine treatment of surfaces will not help prevent infection, since chlorine does not affect rotavirus.

The infected person is dangerous from the moment he had the first signs of the disease, and until the very recovery. And the recovery is determined not by the disappearance of symptoms, but by the negative result of the rotavirus test. The peak of infectiousness occurs on the 3-5th day of the disease, while the maximum number of viruses is allocated with the feces of the patient.

Children and adults who are caring for them or simply working in places with a large number of children are most often affected by rotavirus. Parents and representatives of the so-called decreed contingent are educators, nannies, and workers of the children's nutrition unit.

It is important to remember that rotavirus is extremely contagious, and non-compliance with basic hygiene measures at times increases the risk of getting an infection:

The disease caused by rotaviruses occurs in cycles:

The disease begins acutely, with vomiting, diarrhea of ​​a characteristic kind( the chair looks like clay light, urine dark, maybe with blood inclusions).There is a runny nose, soreness in the throat, loss of appetite and weakness.


As a rule, the peak incidence occurs simultaneously with outbreaks of influenza, and therefore rotavirus infection is also referred to as "intestinal flu".In connection with severe diarrhea, dehydration occurs, because of which even a fatal outcome is possible.

Children are much more likely to get "intestinal flu" because their immunity is weaker than in adults, in addition, the acidity of the adult stomach is higher, which inhibits the reproduction of viruses. As with each such disease immunity is developed, with age, rotavirus is transferred more and more easily( provided that it is the same rotavirus to which immunity is developed).

How does the child develop

? At an early age, frequent occurrences of rotavirus are enteritis, gastroenteritis and secondary lactase deficiency.

In children under the age of five, the disease is very difficult and is accompanied by severe intoxication. Signs of rotavirus infection in children:

The younger the child, the heavier the course of the disease. If any of these symptoms appear, you should immediately consult a doctor, since for babies rotavirus is very dangerous.

In addition, there are a number of signs that appear at any age to cause immediate hospitalization:


In all these cases, you need to immediately call an ambulance, as the patient must be urgently hospitalized and begin treatment as soon as possible, since such conditions threaten life.

Infection with rotavirus infection can be suspected by characteristic symptoms: intoxication, febrility, vomiting, diarrhea, abdominal pain. However, in order to diagnose it is necessary to conduct research:

But the treatment of the disease should begin immediately( by symptoms), without waiting for the laboratory. Upon receipt of the test results, the treatment will simply be adjusted accordingly.

The causes of bubbling in the abdomen and how to deal with it http://woman-l.ru/prichiny-burleniya-v-zhivote/
to the table of contents ^

There is no specific way to treat rotavirus. Antibiotics for rotavirus infection in children are not used. Therefore, the symptoms of the disease are treated and the patient is relieved at home.

During this period it is important to take care of the question of what to feed the child with rotavirus infection:

For rotavirus infection, children are prescribed:

In addition, infants need to change diapers as often as possible due to diarrhea. If signs of worsening appear, you should immediately call an ambulance.

Babies breastfed can, as a complication, disrupt the absorption of breast milk, in this case, temporarily, the baby should be transferred to a lactose-free mixture. And my mother in this period will need to be expressed, so that milk is not lost. This milk intolerance can last about 3 weeks.

Older children also do not eat dairy products for 3 weeks.

On the first day of recovery, biscuits are allowed. On the second day the child is fed rice porridge on water without oil.

With 3 days allowed buckwheat and oatmeal in water without oil. You can also mashed potatoes( only without milk and butter!).

To protect the child from rotavirus infection, for the purpose of prophylaxis it is necessary: ​​

In children's institutions, rotavirus or, as it is also called, "intestinal flu" is quite common. Usually for school age, almost every child has already been ill with this illness at least once. Immunity after the disease is formed unstable, so you can get infected repeatedly.