The main symptoms of a child's nose fracture

Taking into account the structure of the nose and its location on the face, it can be concluded that it most often undergoes various injuries, and especially this applies to children. If the baby is not on time to provide first and medical assistance, the resulting injury will leave a mark on his face for life.

In addition, even a minor cosmetic defect can cause severe psychological problems and complexes. When there is infection of the wound surface and tissue death, the face can be disfigured. Parents should learn to determine the fracture of the nose for certain symptoms in order to immediately resort to help.

The nose is an important organ by which the normal operation of the human respiratory system is achieved. If there will be even the slightest problem with his work, it will not only change the appearance of the child, but will also cause the development of ailments. In order for parents to determine the fracture of the nose bone, it is necessary to pay attention to the following symptoms, which indicate the presence of this pathological process: 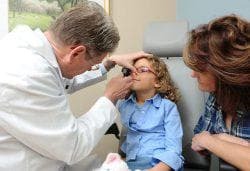 Recent signs are symptoms that may indicate a concussion or brain injury. Sometimes it is not always possible to visually understand the nature of the injury. So after the first aid the child must be taken to the hospital.

If a child is diagnosed with a fracture of the nose bone, then first aid should be given to him as soon as possible. In addition to severe pain and heavy bleeding, the baby can be in a state of shock, and this requires immediate treatment. All the symptoms that indicate a fracture of the bone may indicate a severe injury. Only careful diagnosis and first aid will not only help to remove discomfort, but also restore the aesthetic appearance of the face.

If the parents decided that they can handle everything on their own, then they make a terrible mistake. In addition, that the baby will be suffering from pain, the fusion of the bone will be wrong, as a result of which his asymmetry will be disturbed. This will have a bad effect on the appearance of the face. In the future, the child will need to lie down "under the knife" in order to restore the symmetry of the contours.

If mechanical damage to the face has been obtained, then before the child is examined by the doctor, it is necessary to determine the fracture of the nose in accordance with the symptoms presented above. After this, it is necessary to give him first aid.

It involves the following plan:

The child should not be flagged, as this can lead to new bleeding. Parents should see to it that his head was slightly thrown back, and he should not make any sharp movements.

On the video - the causes of nose bleeding

Treatment with a doctor 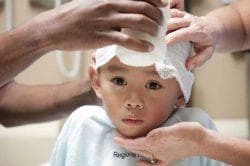 When parents were able to provide first aid to the victim, it is necessary that his further treatment is done by an experienced doctor. After the baby was taken to the ENT department, the doctor will conduct a full examination and prescribe an effective treatment. If a displacement of fragments was detected, then their repositioning is carried out. The code of a trauma is not complicated, then with the help of a local anesthetic the specialist performs a septum correction for a couple of seconds.

The doctor uses a special tool to insert fragments. It is injected into the nasal cavity and the dents are raised. Then insert tampons, which will be there for a couple of days. Their task is to fix the fragments in the necessary position.

When the swelling was managed to stop, it is worth checking the operation of the respiratory function, as well as making sure that there is no cosmetic defect. If necessary, the plan is plastic.

When all the fragments are made up, the doctor will appoint the affected child to take the following drugs:

Bone and cartilage fragments can be corrected using conservative methods. You can do this if the fracture is easy. And with severe trauma you can not do without an operation. Children will be treated under general anesthesia. To remove the accumulated shelter in the nose, drainage is established in the cavity of the hematoma.

What is the price of Sinuporte spray from sinusitis, and how should it be properly used.will help to understand this article.

What folk remedies for nasal congestion without a cold are the most popular, and how to choose them correctly.will help to understand this information.

How it is necessary to carry out the heating of the nose with salt during sinusitis, will help to understand this article: http: //prolor.ru/n/ bolezni-n /gajmorit/ mozhno-li-gret-nos.html

What to do when the common cold often lays the nose and what medicines are best and what is the besttheir name, will help to understand this article.

There are situations when using a special tool - the elevator - when using a bone. To restore the correct position of the nose bone, you need to install tampons into the cavity. Before this, they are impregnated with gypsum.

If the bones and cartilages of the nose are significantly damaged, the child is hospitalized in the department of maxillofacial surgery. There he is prescribed rhinoplasty. This operation involves the restoration of internal structures and the appearance of the nose. If, during the diagnosis, displacement or destruction of the nasal septum was detected, then septoplasty is prescribed.

When surgery has been performed, the position of bones and cartilage is carried out with a plaster bandage. Walk with it is necessary for 2 weeks. If there is an easy case with a closed fracture without displacement, then the therapy is performed immediately in the traumatic unit, and then the patient is sent home.

How it is worth using Bioparox in a runny nose in children, and what effect can there be on this remedy, is described in this article.

But can I wash my nose with saline, and how can I do it correctly?is described in this article.

It will also be interesting to know about which tablets from the common cold and nasal congestion are the best and most popular.

Fracture of the nose in a child - this is a fairly common phenomenon. This happens often due to inattention to parents. Well, if the trauma has already happened, then you need to know the symptoms by which you can understand that this is the fracture of the nose, and not a bruise or a concussion. When the diagnosis has been confirmed, it is necessary to provide timely help and prescribe an effective treatment, which will result in all the symptoms being curtailed and the aesthetics of the face not being disturbed.