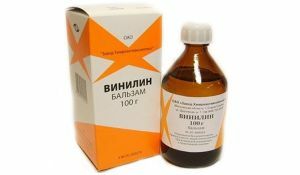 As is known, varicose veins and hemorrhoids are often accompanied by severe inflammation and unpleasant painful sensations, which cause severe discomfort.

If at the time of not eliminating these unpleasant diseases, then in due course serious complications can arise. The use of such a tool as Shostakovskiy's balm Vinilin helps to eliminate inflammation, pain and reduce other symptoms characteristic of skin surface damage of various genesis.

The drug is known to very few people, but it was obtained quite a long time ago, it was synthesized in the last century. Experiments on the study of the active substance of this agent were carried out back in the 40s and 50s of the 20th century.

As a result, unique data were obtained that allowed using this medicine as a wound healing and anti-inflammatory agent. Therefore, Wininlin began to be actively used in various fields of medicine, including phlebology and proctology.

Shostakovskiy's balm is a medicine with antiseptic effect. This drug helps to eliminate various wounds, cracks, sores, and also eliminates damage to the structure of the mucous membranes.

Components and form of release

stavlyayuschim balm component is Shostakovskiy Vinylinum polivinoks or polyvinyl butyl ether. This constituent substance has an active effect on pathogenic microorganisms, which cause inflammation. As a result, it reduces inflammation, redness, itching and pain. 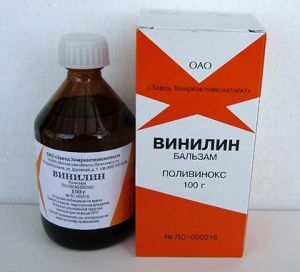 Many patients note that the use of this remedy with hemorrhoids contributes to the rapid recovery of the rectal mucosa and accelerates the healing of wounds, cracks in the anus.

Vinilin is available in the form of a thick, viscous, light yellow balsam that has a specific odor. On sale is found in glass bottles of 50 and 100 grams. The bottles are placed in cardboard packages, 1 piece each.

Pharmacological properties and mechanism of action

Ointment has an anti-inflammatory and antimicrobial effect. During application, the composition of the ointment promotes a rapid regenerating effect on damaged tissue cells.

During use, the components of the drug, getting on the damaged area, have an effective effect on damaged tissue cells. During this process, they begin an active fight against pathogenic microorganisms, while they have a drying effect and speed up the processes of restoring damaged tissues.

During application the balm has the following curative effect on the body:

At what indications should I use

Vinilin is often used for hemorrhoids to reduce inflammation, pain, eliminate itching, and also to accelerate the healing of cracks and sores.

In addition, this tool can be used in other unpleasant conditions:

When it is not recommended to use

Shostakovskiy's balm has some contraindications, which must be taken into account when using it. If they are ignored, serious complications can arise as a result.

Vinilin ointment is not recommended for the following conditions:

Vinylinum is used in many ways - ointment can be applied to the surface of affected areas, and can also be used rectally and for internal use. The method of use depends on the disease and the extent of the lesion.

For hemorrhoids, balm is used according to the following scheme: 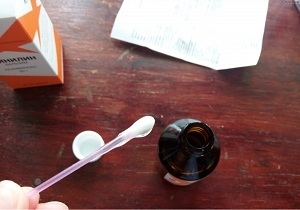 You can also use the ointment in another way. Inflamed hemorrhoids should be lubricated with balsam 3-4 times a day. The course of use is 1-2 weeks.

During the treatment of internal hemorrhoids, the drug must be injected into the rectum. This will require an ordinary syringe and a tube with a length of 5-7 cm, which you need to put on a syringe instead of a needle.

Before use, the ointment should be slightly heated. It is also recommended to make an enema beforehand. The drug is injected into the rectum by the syringe, the volume of the injected ointment should be at least 2 ml. Duration of application - 2 weeks.

Features of treatment for trophic ulcers

During treatment of trophic ulcers and varicose veins, Shostakovskiy's balm is used externally. For this, the gauze tampon is moistened with balsam and applied to the affected area. On the day, repeat the procedure 2-3 times. Used until complete healing.

With varicose ointment can be used in the form of rubbing the inflamed areas.

For internal use Vinilin is not used in pediatrics, but it is often used topically for stomatitis in children. In these cases, the balm is applied to the damaged areas with a thin layer. On the day, the ointment is used 2-4 times, always 2 hours after eating.

During the application of Shostakovskiy balsam, the following important instructions should be considered:

The following unpleasant symptoms may appear during application of the remedy:

Interaction with other drugs

During simultaneous application of Shostakovskiy's balm and anatomic agents, it is possible to complement each other's therapeutic effects of drugs.

During simultaneous use of ointments with antibiotics it is worth considering that balm has an enveloping effect on the stomach, which as a result can reduce the absorption of antibiotics.

Review of the doctor and consumer reviews that used Vinilin in practice.

Shostakovskiy's balm is an antiseptic, anti-inflammatory drug. During its application, the damaged tissues are rapidly restored, fast healing of ulcers and cracks is observed.

It should be used in the initial stages of hemorrhoids, when the inflammation is not very pronounced, and the symptoms of the disease can be eliminated by local means. In the third and fourth stages, its application will not bring much effect.

Hemorrhoids have appeared not so long ago. However, in moments of aggravation, he gives me great discomfort. What only means I did not use to eliminate it, but nothing helped, the effect was only temporary.

Once on the Internet I found Vinilin ointment and decided to immediately purchase this remedy. When the hemorrhoids became aggravated again, I began to treat it with these remedies. As a result, inflammation quickly passed, all cracks and wounds completely overgrown.

Shostakovski's ointment was advised by a friend, she used it for varicose veins. Recently, veins started to inflame me a lot, and I decided to use this drug. I rubbed the inflamed places 3 times a day. After 2 weeks everything passed, even the pains disappeared, apparently this remedy really helps.

The cost of the drug

Buy the drug Vinilin can be in pharmacies, the price of one bottle of Shostakovskiy balsam in volume of 50 grams is from 180 to 240 rubles. Store the product at room temperature in a place inaccessible to children.

Similar products are available for purchase: