Features of planning and course of pregnancy after cesarean section 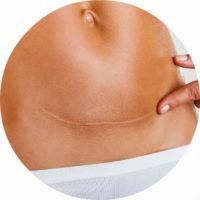 Repeated pregnancy after caesarean section has a number of nuances. In the place of incision on the uterus a scar is formed. Any impact on it can lead to irreversible consequences. Planning a second pregnancy immediately after the first is strictly prohibited. In this case, careful preparation and recovery of the body is required.

Women who wish to have a large family after the delivery start thinking about when to plan pregnancy after cesarean. In some situations, doctors can impose a complete ban on repeated childbirth. The reason is the presence of a certain risk. Childbirth can carry the danger of the life of a woman and her child.

The main contraindications for re-pregnancy after cesarean delivery are the following:

The main reason for imposing a ban on pregnancy is the divergence of the rumen. Seams are divided by location and shape. There is an external and internal seam. The first is located directly on the abdomen, and the second - in the small pelvis, on the uterus. The divergence of the internal scar is characterized by pulling sensations. There is a possibility of internal bleeding. This condition can lead to serious consequences.

The cut can be vertical or transverse. In most cases, practice the second option. It is also called laparotomy by Pfannenstil. The advantages of the seam lies in its location in the area of ​​the natural fold of the skin. This makes it as inconspicuous as possible. The vertical seam is located from the pubis to the navel. This type of seam is characterized by a long healing and a tendency to increase over time.

Pregnancy planning is recommended only after the doctor's approval. The body needs time to fully recover. The optimal duration of bringing the body back to normal is 2 years. At this time, the question is urgent - how to protect yourself from pregnancy after cesarean. Each woman has the right to choose the most optimal option for herself.

The following contraceptive methods are available:

Specialists argue that the most effective ways are using a spiral and taking oral contraceptives. The calendar method and interrupted sexual intercourse do not give 100% protection from unwanted pregnancy. This issue should be taken seriously. With the onset of an unplanned conception after cesarean section, a drug abortion is the most successful option.

Surgical intervention in the presence of unhealed suture after cesarean can lead to unpleasant consequences. Therefore, it is very important to diagnose pregnancy in time. The signs of pregnancy after caesarean section may differ from the symptoms of the first conception. The main guideline is menstruation. If the menstrual cycle after birth does not manage to recover, the woman should be vigilant. It is desirable to use tests that determine the level of hCG, every month.

The risk of pregnancy after caesarean section is as follows:

Preparation for pregnancy after caesarean section implies regular visits to the gynecologist's office. In the process of recovery of the body the following manipulations are performed:


A doctor will give permission for a repeat pregnancy only if the scar after cesarean section is completely formed from the muscle tissue and has become almost invisible.
to contents ^

The nature of the course of the pregnancy depends on how much time passed after the operation. Pregnancy after cesarean section after 3 months requires special control by medical personnel. The probability of development of a frozen pregnancy after cesarean increases. A weak condition of the seam can lead to damage to the walls of the uterus, which can lead to the loss of large amounts of blood. Cases of a successful outcome are very rare.

Pregnancy after cesarean in 6 months is possible only if the scar has healed completely. This is extremely rare. More often, more time is spent on rehabilitation. In the first six months after the operation, doctors will insist on an abortion. Risks in case of possible complications completely fall on the patient's shoulders.

Pregnancy after caesarean section after 9 months can proceed normally. The future mother needs to monitor her state of health. It is recommended to adhere to the following principles:

A woman can notice the changes that characterize the second pregnancy after cesarean section. Often feelings will cause feelings of anxiety. It is advisable to listen to them. It is especially important to pay attention to the following factors:

The third pregnancy after two cesarean sections is the most dangerous option. Observance of the necessary intervals between pregnancies in this case is extremely important. During the third child's birth, a woman may experience painful sensations in the uterus. The probability of termination of pregnancy rises several times. The delivery in this case should be carried out on 37-38 week with the help of an operative intervention.

Foods that can be eaten by a nursing mother after giving birth http://woman-l.ru/chto-mozhno-est-posle-rodov/
to the table of contents ^

Possible complications in pregnancy and childbirth

In the development of the inflammatory process after surgery, the patency of the fallopian tubes can be impaired. This is fraught with ectopic pregnancy. To avoid it, it is desirable to conduct a comprehensive survey of reproductive organs before planning.

The most common problems of early pregnancy after cesarean section include:

Pregnancy a year after caesarean section does not cause much controversy among representatives of medicine. But even in this case there is a possibility of possible complications. The first year after the operation is considered the most important for a woman's health. Do not interfere with the recovery process.

Positive for the rehabilitation period is the intake of vitamins and reduced physical activity. The nature of the course of the next pregnancy depends on how much time has passed since the moment of surgical intervention, and how the healing process took place.

Women who have experienced difficulties in the recovery period after cesarean section are interested in second birth alone. The natural delivery in the second pregnancy is entirely possible. But for this, the following conditions must be fulfilled:

If all the conditions are met, and from the time of previous births, more than 1-2 years have passed, then the doctor can give consent to delivery in a natural way. Otherwise, surgery is inevitable.