How to prepare and pass a blood test for oncomarkers 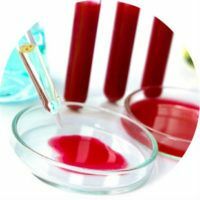 Oncomarkers are a group of organic chemicals that are formed by pathological cells of the body or healthy tissues in response to the invasion of cancer cells. The concentration of these compounds increases with the appearance of malignant tumors, the growth of benign neoplasms or the occurrence of certain inflammatory diseases. To detect them, a specific blood test is needed - it allows you to identify serious illnesses in the early stages and determine the effectiveness of the treatment.

This definition includes a whole group of biomolecules of different nature and origin. However, all oncomarkers combine a common property - their level in the blood and urine increases with the formation of malignant or benign tumors in the body. Often these substances allow to learn about the development of the disease long before the appearance of its first obvious symptoms, which makes the treatment as effective as possible.

Basically, oncomarkers are blood products released into the blood of the neoplasms themselves or adjacent tissues. Healthy cells also produce some of these substances, but in much lesser amounts. To date, more than 200 such compounds are known, but only 20 of them are of diagnostic value.

At present, the blood test for oncomarkers has the following objectives:

Depending on the origin, oncomarkers may be:

Depending on how the oncomarkers differ from the substances produced by non-tumorous tissues, they are divided into 2 types:

Also these structures differ in some specificity, that is, they can indicate the defeat of specific organs:
to the table of contents ^

To determine the level of oncomarkers, the method of enzyme immunoassay( ELISA) is used. The result is usually ready the next day.

To obtain a reliable result, several rules should be followed when passing the analysis:

Read more about the causes of the development, symptoms, diagnosis and treatment of breast cancer http://woman-l.ru/simptomy-i-lechenie-raka-molochnoj-zhelezy-u-zhenshhin/
to the table of contents ^

How often to take

There are schemes for conducting tests to monitor the state of human health:

The analysis for oncomarkers does not have 100% confidence in the result, however the study of the concentration of these substances has a certain diagnostic value: