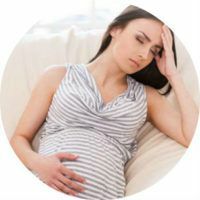 Joy of motherhood is accompanied by a number of unpleasant moments. It starts toxicosis, jumps of arterial pressure are observed, concentration of attention is reduced, and headaches appear. Migraine is a common phenomenon. The nature of its appearance is due to changes occurring in the female body in the process of developing a new life.

The cause of the onset of headache during pregnancy is determined by a number of symptoms. Consideration is given to the type of pain, its duration and local location. The nature of the sensations can be as follows:

The center of unpleasant sensations can be fixed in any part of the head. In the nape of the neck often appears pain, indicating hypertension. One-sided pain of a pulsating nature is characteristic of a migraine. In the case of development of pre-eclampsia and anemia in pregnancy, the headache in the temples.

The diagnosis is based on the accompanying symptoms. They include the following:

Headache may occur episodically or occur continuously, but with varying intensity. In some cases, it causes provoking factors. These include a sense of hunger, blood pressure jumps, magnetic storms and so on.

If your eyes and head are hurt during pregnancy, then the cause may be SARS or ophthalmic diseases.

In a situation where the headache and nausea in pregnancy, it may be a question of banal toxicosis. It is considered a normal reaction of the body to the birth of a new life. Each woman has a different intensity of manifestation.

Severe headache may occur after eating certain foods. For example, coffee, chocolate, spicy foods or nuts. The exact answer to the question why this happens can be given by the attending physician. Some women experience an allergic reaction to certain foods. In addition to the headache, in this case there may be rashes on the surface of the skin.

The main reasons for the appearance of a headache in pregnant women are:


With a single appearance of aching headache, you do not have to worry about the reasons that caused it. If this condition is repeated systematically, it makes sense to visit a doctor. He will determine the cause of the deterioration of well-being and prescribe an effective treatment. For the diagnosis of certain diseases, the delivery of tests is not enough. Sometimes additional diagnostic procedures are required. These include:

Some procedures to do with pregnancy are prohibited. In the presence of headaches at the planning stage, it is recommended to find the cause of the disease and reduce its manifestation. This will avoid complications during the bearing of the child.

In some cases, the condition in which the head hurts is regarded as a sign of pregnancy. This phenomenon is provoked by hormonal leaps. The woman raises irritability, there is a nausea and a migraine. The organism is completely reconstructed, preparing for the bearing of the child.
loading. ..

Many women are worried about the question - if the headache, what to take during pregnancy? Most medication is not allowed at any time of pregnancy. It is especially important to take into account in the first trimester an interesting situation. To ease the condition, it is recommended to use the following methods:

If the head is very painful during pregnancy, the attending physician can allow the taking of medications. But this is not practiced in the early stages of pregnancy.

Do not use analgesics without doctor's advice if your head hurts during pregnancy. Tablets are an undesirable form of medication. Most often, injections are prescribed. One of the most common drugs for injection is Spasmalgon. Often used and Baralgin.

If the head during pregnancy hurts constantly, there may be a question about the implementation of an abortion. Very often such pains are accompanied by serious diseases of life support systems. They can affect the development of the child. In each case, the doctor evaluates the risks, and together with the woman makes the final decision on further actions.

In a situation where the head and heart hurts during pregnancy, it is necessary to make a cardiogram. After confirming violations of the cardiac muscle, prescribed drugs are prescribed. Most often prescribed sedative drugs, allowed during the bearing of the child.

The condition in which the head hurts and drowses during pregnancy, does not require any cardinal measures. Such sensations can accompany a woman during the entire period of pregnancy. The organism becomes susceptible to any external factors. As a result of this, there is a deterioration in overall well-being.


How to deal with insomnia during pregnancy http://woman-l.ru/bessonnica-pri-beremennosti/