Symptoms of poisoning with mushrooms 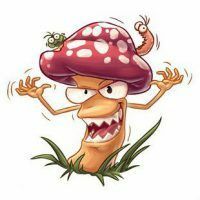 The end of summer and the beginning of autumn is the season of picking mushrooms. In the mushroom season, urban sanitation and epidemiological services often record cases of fungal poisoning. Even mushroom pickers with many years of experience are not immune from this problem. In Russia there are about 70 kinds of inedible fungi, 20 of which have strong toxic properties. Poisoning a person with fungi often results in death, so it is important to recognize the first symptoms of the disease in time, as well as promptly provide medical care to the victim.

Many poisonous species of fungi can cause severe andtoxicity of the body with a fatal outcome. Deadly poisonous mushrooms are:

At present, toxicity of some species of fungi by mycologists has not yet been fully studied.

Mechanism of exposure to toxins per person

Poisonous fungus, getting into the human body, releases toxins that are transported with blood flow to the cells and tissues of internal organs. Toxic compounds of fungi affect the mucous membrane of the digestive tract, disrupting the work of the digestive system in humans. Lethally poisonous fungi first cause kidney and liver dysfunction, disrupt the heart, and also affect the lower gastrointestinal tract and central nervous system.

Signs of intoxication with a pale toadstool

The first symptoms of poisoning pale toadstool are fixed only 8-36 hours after their use. The patient at the initial stage of fungal poisoning is noted:


During the day, the above symptoms of poisoning can disappear for several hours, and then reappear.

On the second-third day after poisoning, the patient has symptoms of renal failure and hepatodepression:

After a person falls into a coma. Intoxication with poisons of pale toadstool in 80% of cases is fatal.

Symptoms of poisoning with fly agarics

Most fly agarics are poisonous mushrooms, which mushrooms are mistaken for honey agarics or champignons. In fly agarics contains a dangerous poison muscarin, a hallucinogen bufotenin and toxins that affect the receptors of the central nervous system.

Symptoms of poisoning with fly agarics in humans appear an hour after they enter the body. The patient has:

In more severe cases, a person has hallucinations, seizures, anxiety attacks. If the victim was promptly provided with medical assistance, a full restoration of the functions of the central nervous system and the work of internal organs will come in a few days.

The lines contain a toxic compound - helvellic acid, which affects the functioning of the digestive tract and the nervous system. The content of poison in the lines may fluctuate and depend on the weather conditions and the time of collection of these fungi. Sometimes in mushrooms there is an insufficient amount of helvellic acid to cause an intoxication of the body.

The first symptoms of poisoning by lines are recorded six hours after their use. The victim notes:

In severe cases, a person develops renal and hepatocellular insufficiency, which is complicated by anemia, hemoglobinuria and CNS damage. The death of the patient occurs on the fourth day due to circulatory failure.

To prevent poisoning mycologists are advised to use the lines in boiling water for about 15 minutes before using. Then the broth needs to be poured, and the mushrooms are well wrung out and rinsed under a stream of running water. Only after such a long cooking process the structure of toxic helvellic acid will be completely destroyed. It is forbidden to eat more than 200 grams per day.

Signs of intoxication with false mushrooms and mushrooms by the

mildew. Mushrooms include mongrels, blackies, mushrooms, spiderwebs and other mushrooms containing toxic milky juice. Symptoms of poisoning with mushrooms and mucus glands appear 1-6 hours after their use and are expressed in the dysfunction of the digestive tract. In humans, there is:


In severe cases of poisoning, dehydration of the body occurs, which is accompanied by convulsions and violation of the heart. Recovering occurs three days after poisoning with mushrooms.

Methods for removing fungal poisons from the body

Providing prompt medical attention with intoxication with fungi will help not only to avoid serious complications, but also to save the life of the victim. First, the patient should be vomited to clear the stomach of food debris with toxins, and stop the process of absorption of toxic compounds into the blood and their spread throughout the body. You can induce vomiting in the following ways:

If a person is unconscious, it is prohibited to prescribe an emetic, since choking with vomiting is possible.

It is possible to remove toxins from the patient's body by washing the stomach. To do this, it is recommended to drink the maximum amount of warm water and then provoke a vomitive reflex. In water, you can dissolve several crystals of potassium permanganate, which neutralize toxins in the human body. If the wash water is clean, the gastric lavage procedure can be stopped. The patient should drink about 15 liters of liquid.

Accelerates the removal of toxins from the intestine reception of sorbents: activated carbon, entorosgel, white coal, as well as laxative solutions prepared on the basis of Karlovy Vary salt or salt gaver. For their preparation, it is necessary to dissolve the salt with a mass of 20 g in warm water of 200 ml in volume. You can also remove residual toxins from the intestine with the help of a siphon enema.

To avoid dehydration, it is necessary to drink up to 5 liters of liquid per day in combination with diuretics. Water stress is prohibited for patients with a diagnosis of circulatory insufficiency and anuria.

After carrying out the above procedures, the patient should be promptly taken to the hospital for treatment.

Rules for the prevention of mushroom poisoning