Effective treatment and diet and with erosive gastritis of the stomach 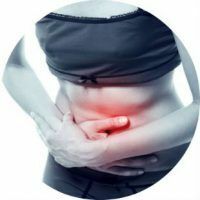 An erosive gastritis is a disease associated with the defeat or inflammation of the upper outer layers of the mucous membranes of the stomach. Erosive gastritis symptoms are expressed not only in the appearance of pain syndromes in the stomach and / or burning sensation in the esophagus, but the risk of a violation of virtually all basic functions, including the secretion, gastro-intestinal tract.

characterized by malaise development of sores on the mucosal surface, cell regeneration disorder, atrophy of epithelial tissues and the replacement of normalfunctioning glands of internal secretion by fibrous scars. As a result of a breach of the integrity of the epithelial mucosa in the late stages of the disease, bleeding may occur, and the patient's condition is related to a precancerous one. Even after complete healing of the lesions, the disease can appear again. Reasons

emergence and progression of erosive gastritis caused by exposure to the gastric mucosa many factors:

Inflammation of the mucous membranes can occur in acute or chronic form. Acute forms are divided into: erosive gastritis, hemorrhagic and focal erosive. The latter species is characterized by a local location of foci of lesions of the mucosa and by its characteristics does not differ from other forms of erosive gastritis.

The peculiarity of acute erosive gastritis is a fairly extensive lesion of the lower part of the stomach with the appearance of ulcers on the entire surface of the mucous membrane. Dangerous that after healing of the wounds on the mucous there are scars that can later deform the antrum part of the stomach, and if the scars are relapsed at the site of bleeding, bleeding may occur.

Hemorrhagic gastritis occurs against a background of a chronic or neglected disease, and also when an infection is attached. It is expressed in permanent bleeding and is the most serious form of the disease. Treatment of hemorrhagic gastritis requires serious medical intervention with competent selection of medicines under the supervision of an experienced specialist.


Chronic gastritis most often occurs on the background of autoimmune pathologies, anemia, infectious and bacterial lesions, adverse alkaline( pH) or acid balance of the stomach and other causes. It is manifested by common and local signs during the period of exacerbation. During the remission, there is practically no concern for the patient.

Erosive gastritis of the antral part of the stomach( lower part, bottom) is most often caused by damage to the normal flora by Helicobacteria, which multiply, form colonies, destroy the mucous membrane and lead to the formation of bleeding sores.

The tightening with the treatment of erosive gastritis is fraught with not only a deterioration in the state of the patient's health, but also the transition of the disease to a more severe form. It can be:

Diagnosis and analysis of

The diagnosis begins with a patient examination, anamnesis and an endoscopic examination of the stomach wall. At the same time, samples of a biopsy specimen, tests for the content of helikobacteria, research of changes in the mucous membranes( erosion, their nature, etc.) are taken.


Repeated examination and clarification of the content of Helicobacteria can be carried out using a gas analyzer and respiratory tests. Laboratory blood and urine fetuses( for general clinical and biochemical analysis), feces for blood and Helicobacter pylori are necessarily performed.

The management of acute gastritis can occur in both inpatient and outpatient settings. For these purposes, intramuscular or intravenous injection of pain medications, remedies relaxing the smooth muscles of the gastrointestinal tract, purifying and supporting the functions of the liver are administered once.

Antisecretory drugs( regulating the production of hydrochloric acid in the stomach), M-cholinolytics( antiulcer substances), antacids, antifungal and antibacterial agents for the destruction of fungi and helicobacteria enveloping medicines are used to treat chronic forms of gastritis. As supportive measures, vitamin complexes can be prescribed. For example, vitamin U( methylmethionine sulfonium chloride) reduces the secretion of gastric juice, has an analgesic effect, vitamin B5( pantothenic acid) promotes regeneration of the mucous membranes, normalizes the intestinal peristalsis.

For more details about the drugs that are used to treat various forms of gastritis and other diseases of the gastrointestinal tract, read the article http://woman-l.ru/kakie-lekarstva-prinimayut-pri-gastrite-zheludka/
to the table of contents ^

In case of exacerbation of erosive gastritis, patients need a sparing diet. It should be rich in proteins and vitamins, fresh, stewed and boiled fruits and vegetables, cereals. Food must necessarily be warm, sufficiently crushed and liquid( mashed soups, cream soups, semi-liquid and enveloping porridges such as oatmeal, jelly).The daily norm of food is divided into 5-6 receptions in small portions. Between receptions should take at least 2 hours.

Poorly affect the stomach in the acute period of the seeds, nuts( can scratch the mucous membrane), kefir. Low-fat fresh sour-milk products are allowed only during remission and in small portions. Have a good astringent effect of persimmons, pumpkin baked or in the form of porridge, baked apples, bananas.

Most often, erosive gastritis develops in children of primary school age. This is due to irregular and incorrect nutrition, nervous and physical overstrain, abuse of harmful food( crackers, chips, carbonated drinks, etc.).

Treatment of the disease is carried out with the same drugs as in adults, but with appropriate dosage. It is recommended to follow a strict diet, diet, daily routine, age and physical and emotional loads, rest.

No forms of gastritis are contraindications to the conception of a child. In the first trimester, an exacerbation of the chronic condition and an increase in toxicosis are possible. Treatment of the disease in full is not done, so as not to harm the development of the fetus. It is recommended to adhere to the diet and take the prescribed medications prescribed by your doctor.

A freshly squeezed juice from the leaves of cabbage, potatoes or beet is considered to be an effective and effective way of treating gastritis. It takes juice for 1/3 or 1/2 cup for half an hour before meals 3 times a day.

Flax seeds( 2 teaspoons) are poured with 200 milliliters of boiling water, insist 2-3 hours. It is used for 1/3 cup for half an hour before meals 3 times a day.

Well wrapped and soothe the gastric mucosa of the sea-buckthorn, linseed, olive oil, raw egg. They are drunk in the morning on an empty stomach 15-20 minutes before meals. Oils need to take 1 tablespoon, an egg - a minimum of 1, if you like the feeling and effect, you can drink up to 3 pieces, a little salting to improve the taste.

Propolis tincture is considered a miracle cure not only for gastritis, but also for many other diseases of the body. It is taken, starting with 1-2 drops before eating. Dosage is adjusted to 50 drops, then go in the reverse order( gradually reducing the dosage).

The development of erosive gastritis can be prevented or prevented by simple rules: