Symptoms and treatment of ankylosing spondylitis 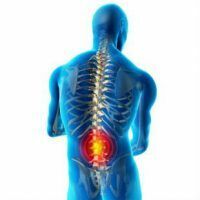 Ankylosing spondylitis is a chronic inflammatory disease of the spine, characterized by a gradual restriction of joint mobility with the formation of bone fractures( ankyloses).This disease has received the second name "Bekhterev's disease".

Unlike other forms of arthritis, ankylosing spondylitis inflammation affectsthe outer part of the joints in the places where the tendons attach to the bones. Bechterew's disease most often develops in the vertebral joints and ligaments, and the ossification of the latter leads to a fusion of the spine into a single bone. In some cases, hip, knee and ankle joints can also be affected by inflammation.

The history of ankylosing spondylitis dates back to the distant past, as some Egyptian mummies found signs of the disease. The first mention of the disease in medical sources is found in the book "Anatomy" by R. Colombo( 16th century).About 100 years later, the Irish doctor B. Connor described in his work the skeleton of a man with a scoliosis curvature of the spine, in which the thoracic segment with ribs and the lumbar with the sacrum and pelvic bones merged into one monolithic block. More detailed defeat of the joints was studied and described in 1893 by the Russian physician Vladimir Bekhterev, due to which the disease received its second name.

The etiology of this disease is not exactly defined, but there are several possible causes of ankylosing spondylitis:

It should be noted that factors such as viral and infectious diseases can contribute to the development of Bechterew's disease, or aggravate its course. Injuries to the spine are also provocative.

The development of Bechterew's disease occurs gradually. The first symptoms are manifested in the form of painful sensations in the lower back. Over time, these pains become more intense and spread to neighboring parts of the spine. As a rule, the pain syndrome is persistent and subsides only after taking medications. In some cases, the patient may not observe painful sensations, and the disease manifests itself only by limiting mobility. More often the pain syndrome increases in the morning hours, and subsides with movement and physical activity.

Restriction of cervical mobility occurs in later stages of the disease, as the inflammation spreads from the loin to the cervical vertebrae. In some cases, pain can occur in the chest area, since the disease leads to a reduction in the activity of the joints, which are the link between the thoracic vertebrae and the ribs. This, in turn, provokes the development of chronic respiratory apparatus diseases.

Pain in the chest area, as well as shortness of breath and disruption of the cardiovascular system, can signal that Bekhterev's disease provoked a heart and aortic lesion. In some cases, the disease contributes to the appearance of kidney failure. In some patients, there is the appearance of pain and limited mobility in the temporomandibular, hip, shoulder joints. In more rare cases, swelling of the hands and feet may occur.
loading. ..

In domestic and foreign practice, the following classification of Bechterew's disease is used:

In the form of joint damage:

Following the course of the disease:

At the stage of development of the disease and disruption of joint function:

In the first stage of the disease, ankylosing spondylitis can be detected only with magnetic resonance imaging( MRI).At the second stage, the diagnosis is made based on the results of the x-rays of the joints and bones. In the latter case, the most pronounced changes are seen in the region of the hip joints.

Blood test for the presence of the HLA-B27 gene and a clinical blood test are used to determine inflammatory parameters. In the early stages, ankylosing spondylitis is difficult to detect, especially if the disease is mild. Changes in the results of laboratory tests, which include leukocytosis, serum protein, ESR, and reactive protein, are also observed only in the acute stage of the disease.

When diagnosing, the presence of diseases with inflammation of the spine and joints that occur with similar symptoms should be excluded.

Treatment of ankylosing spondylitis, unfortunately, does not guarantee complete elimination of the disease or stabilization of the pathological process. In general, it is aimed at eliminating inflammation and puffiness of the tissues, and, consequently, pain, increased motor activity, elimination of stiffness of the spine and joints.

To stop inflammatory processes and remove the pain syndrome patients are prescribed medication. As a rule, non-steroidal anti-inflammatory drugs are the basis of therapy. They do not contribute to the healing process, but they significantly improve the overall health and help maintain proper posture. Appointed NSAIDs for a long period of admission - from 1 to 5 years, and sometimes for life.

The medicines of this group include:

Chronic inflammatory processes in rheumatic diseases have prompted physicians to develop drugs of directed action. For example, the biological remedies Remicade and Humira( inhibitors of the immune response of TNF-a) or inhibitors of the activation of B-cells( Rituximab) neutralize the action of inflammatory mediators and are perceived by the body as natural protein compounds that stop inflammatory chain reactions.

Glucocorticoids refer to steroid hormones produced by the adrenal cortex. When Bekhterev's disease is used for immunoregulatory protection of the body, normalization of metabolism, removal of inflammation, anti-stress effect. The main representatives of the group:

Medical gymnastics with Bekhterev's disease is of great importance. Regular sessions provide longer maintenance of the spine( mobility) functionality, preventing the bodies of the vertebrae from growing together, and the establishment of the disability is postponed for a longer period, allowing the patient to retain working capacity.

Immobilization of the body, the psychological state of the patient in which he constantly regrets himself and limits his own motor abilities, leads to the progression of ankylosis.

In addition to general strengthening exercises for each patient, an individual complex of exercise therapy is developed, which is aimed at:

The use of specialized respiratory gymnastics such as "Qigong" or by the method of Katarina Schrot increases the ventilation capabilities of the lungs, which are reduced due to the defeat of costal and vertebral and / or rib-chest joints. In doing so, exercise is recommended every morning, regardless of how you feel. Insufficiency of respiratory activity is fraught with the development of pulmonary infections, which aggravates the course of the disease. Significantly increase respiratory capacity will help long walks in the fresh air quick steps or inflating the balloon at least 3-4 times a day.

Read also what exercises you need to perform to cure scoliosis http://woman-l.ru/kompleks-uprazhnenij-pri-skolioze/
to the table of contents ^

Doctors do not prescribe a special diet for Bekhterev's disease. Each patient independently determines products that have a beneficial or detrimental effect on his or her health status. The main thing is that the nutrition is balanced, full and does not lead to an increase in body weight, which increases the burden on the vertebral column and articular joints of the lower extremities.

Some experts recommend adhering to a Mediterranean( protein) diet rich in seafood, fish, vegetables and fruits. Others advise to completely abandon the use of meat, especially to patients after 40 years of age or to go without starchy foods and foods.

During the period of remission of the disease, rehabilitation measures can be actively used: exercise therapy, swimming, physical therapy, massages, manual therapy methods( acupuncture, stone therapy, acupuncture, plantar massages of feet, palms, ears, etc.).The annual stay in the sanatorium-and-spa institutions, which specialize in the treatment of diseases of the musculoskeletal system, is shown. At the same time,

does not stop the anti-inflammatory therapy.

Harmful habits adversely affect the general condition of the body and in a healthy person, and with ankylosing spondylitis accelerate the onset of disability several times. Alcohol has an effect on the immune system, weakening its resistance to pathogenic microbes, and smoking provokes chronic bronchitis, reducing ventilation of the lungs.

Timely and adequate therapy of the disease only slows its progression, improving the quality of life of the patient, but in no way eliminating the cause of the occurrence. Thus, sooner or later the patient still loses his ability to work and receives a group of disabilities. A person is fit to perform most types of work, but he recommends activities that allow alternation of legs, walking, sitting, while completely sedentary work facilitates the rapid ossification of the skeleton.

With a moderate limitation of life and work capacity with a slow progression of the disease with infrequent exacerbations and the level of damage to the joints of the 1st degree, the patient is assigned a third disability group.

With a pronounced impairment of motor abilities with a rapidly progressing course of the disease and frequent exacerbations, the degree of damage to joints II and III, the central and rhizometric form establishes the II group of disability.

I group of disability is established with pronounced deformations of the spine and joints, complete restriction of vital functions, impairment of musculoskeletal functions and work of internal organs, loss of ability to work, and in some cases, the patient's possibilities for independent maintenance.

Ankylosing spondylitis increases the risk of spinal cord injuries, so patients are shown mandatory use of seat belts when traveling on vehicles, and behind the wheel of a car - a headrest that will support the neck. In severe cases, it is recommended to use the walking stick when walking or crutches.

Bechterew's disease, unlike other forms of arthritis, practically does not lead to the destruction of the joints and bones of the spine, but is accompanied by a complete restriction of their mobility. In the absence of timely treatment, most patients with the development of the disease become disabled. Therefore, it is very important to diagnose ankylosing spondylitis in the early stages and use all possible methods of treatment.

Pregnancy in Bechterew's disease can be accompanied by a sharp exacerbation or improvement in the general condition of the body. The overall long-term prognosis for the development of pathology is not related to pregnancy.

Since the main role in the occurrence of Bechterew's disease is played by hereditary genetic factors, there are no specific indications for its prevention. Of the general recommendations: