Symptoms and treatment of breast cancer in women 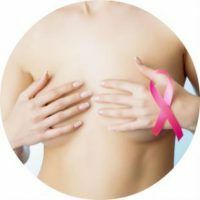 Breast cancer in recent years ranks 3rd among all causes of death of women. These indicators could be significantly lower if each representative of the weak half of humanity treated herself more closely, did not neglect preventive examinations at the gynecologist and mammologist. This is the only way to detect the first symptoms of breast cancer in time.

The causes that lead to breast cancer have not been thoroughly studied. However, there are factors in which women are considered to be at increased risk of developing this type of cancer:

Breast cancer also affects women who do not fall into the risk group, since most often it appears as a result of a combination of genetic and environmental factors.
to the table of contents ^

Almost all subspecies of breast cancer are characterized by pain and discomfort. Sometimes there may be other common for all kinds of changes, for example:

For any type of breast cancer, a woman may experience a number of skin symptoms. For example, if the skin is infringed over the tumor, one can see a violation of the habitual orientation of the skin folds, the appearance of grooves of different depths between them. Visually, this symptom is similar to senile wrinkles, but appears only in a limited area of ​​the breast.

This pathological wrinkling usually manifests itself in the early stages of the disease. Also in this phase of breast cancer, another more characteristic symptom is often found - skin retraction. It can also appear in the second stage of the disease, but it is found when the skin is squeezed by the fingers when the patient lies.

There are several types of breast cancer. They are similar, but each has its own characteristic features.

The most common form of breast cancer in women. The growth of the tumor resembles a knot: palpation can be felt dense, tuberous and rounded with fuzzy contours. A knot can be sore and often characterized by limited mobility, since there is germination in the surrounding tissue.

Already in the first stage this subtype of cancer is manifested by such an external sign as wrinkling of the skin, and as the growth of the node increases, skin retraction is observed. The late symptom of this ailment is the skin, visually resembling the lemon peel. The nodular form of breast cancer can also affect the nipple, which appears to be a noticeable deformity.

The edematous form affects mainly young women. Most often, it develops during the period of childbearing or lactation. The course of this type of breast cancer is acute, but there is almost no pain. Symptoms include swelling of the skin and breast tissue. At the first stage, a densified patch of chest with a reddened skin appears, which eventually spreads throughout the breast.

Rozhistopodobny cancer is accompanied by reddening of the skin. This symptom is easy to distinguish from other rashes or irritations, as the edges of redness are uneven, linguiform. The disease proceeds acutely, the body temperature can rise to 40 ° C, but the tumor upon palpation is almost impossible to detect.

Mastitis-like form of cancer is common in young women and manifests itself in such symptoms:

Paget's cancer is considered a form of the disease with the most favorable prognosis of cure. It is a localized species that affects the nipple and / or areola. Clinically, it manifests itself in the form of symptoms such as ulceration and maceration of the nipple. In the absence of treatment, the disease progresses, the nipple collapses, leaving an ulcer in its place.

When carcinoma cancer( diffuse-infiltrating form), there is a decrease in the mammary gland, skin tightening. The affected breast is limitedly mobile. The disease, as a rule, affects the gland on one side of the body, but in the absence of treatment it spreads to the other.

Occult breast cancer is also called hidden, since it is almost impossible to determine it. The first clinical sign is the enlargement of the lymph nodes by the armpits, but the tumor itself is not probed in the gland itself. Often a woman with this type of cancer is treated for inflammation of the lymph nodes, and it can be detected only when peripheral metastases appear.

Protokovy breast cancer begins to develop from the internal walls of the milk ducts, while not affecting the proportion and other glandular tissue. Invasive protocol( infiltrative) breast cancer manifests itself by such symptoms as discharge from the nipples, painful sensations, dense or pineal areas in the mammary gland.

Breast cancer requires immediate treatment. After a complete examination, establishing the stage of the tumor process and the presence of concomitant diseases, one of the following therapies is used:

In the treatment of stage 0 breast cancer, the removal of the cancer-affected area of ​​the breast( sectoral resection) or lumpectomy is mainly used. Operations may be accompanied by lymphodissection - removal of the adjacent lymph nodes. Also, in the treatment of stage 0 cancer, radiotherapy is always prescribed, and in some cases targeted therapy.

For the treatment of stage 1, a lumpectomy with the removal of the axillary lymph node is used. To get rid of the remaining cancer cells and to avoid their repeated reproduction, hormonal, radiation or chemotherapy is prescribed after the operation.

The first stage of treatment of stage 2 cancer is partial removal of breast tissue( lumpectomy) or complete removal( mastectomy) of the breast tissue. In this case, the elimination is subject to increased regional lymph nodes. After the operation, a course of chemotherapy is prescribed. In those patients who have a tumor of 5 cm or more, the course of chemotherapy is prescribed 2 times: before and after surgery. In addition, according to the indications, courses of hormonal and radiotherapy are conducted.

In the treatment of stage 3 of breast cancer, a complex attack is first applied to cancer-affected cells using cytotoxic agents( chemotherapy) and oncological hormonal therapy. If the first stage has yielded positive results, the treating doctor makes a decision to conduct an operation, the result of which is fixed by a repeated course of chemotherapy or ionized irradiation. With hormone-dependent cancer tumors, long-term administration of aromatase inhibitors( hormone therapy) is shown, and for cancerous overexpression of receptors, the use of monoclonal antibodies is indicated.

Treatment of the 4th degree of breast cancer is mainly aimed at alleviating the condition of the patients. Correctly selected complex therapy at this stage of the disease can significantly prolong life. Mastectomy is used to reduce the level of intoxication of the body, and all anticancer methods are used to combat metastases: hormonal, radiation and chemotherapy. Supportive treatment of concomitant diseases is also prescribed.

When oncology it is recommended to take phytopreparations on the basis of oncoprophylactic plants( sprouted wheat grains, burdock, ginseng, leuzea root).Also, with breast cancer, there are effective collections of plantain, licorice root and birch leaves.
to table of contents ^

Breast cancer in men can appear with gynecomastia( proliferation of glandular tissue) and in previously healthy gland. The reason for such a rare pathology is the lack of men and an excess of female hormones. Cancer in the breast in men is several times more aggressive than in women, and is less treatable. The symptoms of breast cancer in men include discharge from the nipples and the appearance of neoplasms.

Breast cancer in children is very rare. It can occur in adolescence in girls as a result of hormonal changes in the body. Predisposing factors include:

Breast cancer in children is not as aggressive as in adults. It can manifest itself in the form of common symptoms: weakness, fatigue, weight loss, a slight increase in body temperature. The cause of breast cancer is the violation of cellular metabolism in the child's body. After some time in the baby's chest, a small nodule can appear which is easily palpable. In rare cases, the skin of the breast may appear sores, erosion, which are accompanied by wetting, scales and crusts.

Read also about nonhormonal drugs that must be taken to women during menopause in order to ease their well-being and at the same time reduce the risk of developing breast cancer. Http://woman-l.ru/negormonalnye-preparaty-pri-klimakse/
to the table of contents^

It is impossible to insure yourself against breast cancer, but if you observe some simple rules, you can significantly reduce the risk of its appearance:

The main preventive measure, allowing early diagnosis of the disease - systematic breast examinations, both independent at home and professional at a gynecologist or mammologist.