What atmospheric pressure can be considered normal for humans 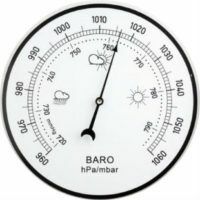 Atmospheric air has a physical density, due to which it is attracted to the Earth and creates pressure. During the development of the planet, both the composition of the atmosphere and its atmospheric pressure changed. Living organisms were forced to adapt to the existing air pressure, changing their physiological characteristics. Deviations from the average atmospheric pressure cause changes in the state of health of a person, while the degree of sensitivity of people to such changes is different.

The air extends from the Earth's surface to heights of the order of hundreds of kilometers, beyond which the interplanetary space begins, and the closer to the Earth, the more compressed the air under its own weight, respectively, atmospheric pressure is highest at the earth's surface, decreasing with increasing altitude.

At sea level( from which it is customary to count all heights), at a temperature of +15 degrees Celsius atmospheric pressure averages 760 millimeters of mercury( mm Hg).This pressure is usually considered normal( from a physical point of view), which does not mean that this pressure is comfortable for a person under any conditions.

Pressure 760 mm Hg. Art.corresponds to the action for each square centimeter of the human body strength of 1,033 kilograms. Totally, the entire surface of the human body is pressurized by air with a force of the order of 15-20 tons.

But a person does not feel this pressure, because it is balanced by air gases dissolved in tissue fluids. This equilibrium is disturbed by changes in atmospheric pressure, which the person perceives as a deterioration of well-being.

For individual locations, the average value of atmospheric pressure differs from 760 mm.gt;Art. So, if in Moscow the average pressure is 760 mm Hg. In St. Petersburg, only 748 mm Hg. Art.

What to do with the decay of forces and how to overcome fatigue http://woman-l.ru/chto-delat-pri-upadke-sil/

In physics, the so-called barometric formula is derived, according to which, with an increase in altitude for each kilometer, atmospheric pressure drops by 13%.The actual distribution of air pressure follows the barometric formula is not entirely accurate, because depending on the altitude, the temperature, composition of the atmosphere, the concentration of water vapor and other parameters change.

Meteodependent people, and there are 4 billion on the planet, are sensitive to changes in atmospheric pressure, and some of them can accurately predict weather changes based on their own well-being.

To answer the question, what is the norm of atmospheric pressure is most optimal for places of stay and human life, it is rather difficult, because people adapt to life in different climatic conditions. Typically, the pressure ranges from 750 to 765 mm Hg. Art.does not worsen the person's health, these values ​​of atmospheric pressure can be considered normal.


With variations in atmospheric pressure, weather-dependent people can sense:

The baroreceptors located in the body cavities, joints and blood vessels respond first to pressure changes.

With a change in pressure in meteosensitive people, there are irregularities in the work of the heart, chest pain, joint pain, and with digestive problems also flatulence and intestinal disorders. With a significant decrease in pressure, the lack of oxygen in the brain cells leads to headaches.

Also changes in pressure can lead to mental disorders - people experience anxiety, irritation, restless sleep or, in general, can not fall asleep.

On the lowering of atmospheric pressure, on the contrary, hypotonics react more sharply. Reduced concentration of oxygen in the atmosphere causes them a violation of blood circulation, migraine, shortness of breath, tachycardia and weakness.

Meteosensitivity can result from unhealthy lifestyles. The following factors may lead to meteorological sensitivity or aggravate the degree of its manifestation:


Elimination of these factors reduces the degree of meteosensitivity. Meteodependent people should:

On the recommendation of a doctor, meteorological dependent people can be assigned natural adaptogenes - tinctures of ginseng, eleutherococcus, preparations based on reindeer antlers.