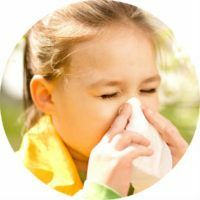 Allergic rhinitis( rhinitis) is an inflammation of the nasal mucosa caused by the action of allergens. Its main manifestations are sneezing, mucus secretion, edema and nasal congestion. When the stimulus is eliminated or after treatment, the symptoms disappear, but they reappear with the next contact with the allergen. The disease affects about a quarter of the population of Russia, and the number of sufferers from it is constantly growing.

Some people experience sensitization - an increased sensitivity of the body to stimuli. Their immune system mistakenly takes normally harmless substances for enemy agents and begins to develop antibodies to fight them. When antibodies interact with allergens, histamines and other chemicals that cause symptoms of allergic rhinitis are secreted into the blood.

First, the mucous membrane of the nose reacts to the stimulus-edema and the production of a large amount of mucus. These secretions, which contain a large number of allergens, flow down the posterior wall of the pharynx, swallow and enter the intestine, and then into the blood.

At the heart of the disease is immediate type hypersensitivity, which means that the allergic reaction develops instantaneously - with an interval of several seconds to half an hour from the moment the irritant contacts the nasal mucosa. However, with prolonged exposure to the allergen, the symptomatology may change.

Read also about the causes, symptoms and treatment of an allergic cough http://woman-l.ru/allergicheskij-kashel/
to the table of contents ^

Depending on the severity of the symptoms, allergic rhinitis happens in the following degrees:


Depending on the duration of manifestations of allergic rhinitis, the following are distinguished:

According to the periods of manifestations, allergic rhinitis is divided into the following types:

The last classification is conditional, since cases of a combination of different types of allergies are not uncommon, for example, on pollen of plants and on animal wool. Also, sensitization can be exacerbated by the influence of certain factors - air temperature or humidity, the state of the human immune system.

The absence of treatment for allergic rhinitis can have negative consequences for the body:

Nasal congestion with allergic rhinitis leads to oral breathing, which also has a number of consequences:

To make a diagnosis it is necessary to visit an allergist or an ENT specialist( ENT).

The procedure includes the following steps:

Differential diagnosis is performed to distinguish it from other forms of rhinitis. So, with the diagnosis of "vasomotor", "infectious" or "rhinitis due to anatomical abnormalities," treatment or surgery is often prescribed without considering the allergic nature of the disease, which can lead to its progression and the development of bronchial asthma.

The objectives of therapy for allergic rhinitis are: alleviation of symptoms with the developed reaction and prevention of repeated episodes of the disease.

For this, the following methods are used:

The concentration of irritants in the air depends on the severity of the clinical picture. Therefore, interaction with them must be minimized, for example:

In cases where contact with the allergen can not be completely eliminated, treatment with medication is performed:

The method is often called allergovaccination or injections of allergies. It is used in case of insufficient effect from drug therapy with moderate or severe symptoms. It is an adaptation of the body to irritant substances. In the patient's body gradually increasing doses of allergen extracts are introduced, causing addiction to it and reducing sensitivity. Procedures are performed during remission and are performed in a hospital, under the supervision of a doctor.

Advantages of the method are:

In some cases, the disease requires surgical intervention.

Indications for him are:

The Strelnikova method is a complex of exercises for the prevention and treatment of respiratory diseases, the restoration of the singing voice.

For allergic rhinitis, the following techniques are recommended:

General rules for performing the exercises:

To alleviate the symptoms of allergic rhinitis helps folk medicine:

Exacerbation of allergic rhinitis can trigger the appearance of other types of allergies, including food.

Therefore it is important to limit consumption or completely exclude from the diet possible irritants:

The diet should include:

Allergic rhinitis occupies a leading position among the total number of allergic diseases in children older than 6 years - it accounts for 70% of cases. In children under 3 years old, the disease is rarely diagnosed.

In addition to factors characteristic of adults, the impact on the development of the disease in children has:

If a child develops a symptom of allergic rhinitis, the child should immediately consult a doctor. Ignoring the disease can lead to serious complications:

Allergic rhinitis can occur even in those pregnant women who have not previously been exposed to this disease. The causes are weakened immunity and an increase in the level of the hormone estrogen, which increases swelling and mucus production in the nasal passages.

Ignore unpleasant manifestations in no case it is impossible - a harmless, at first sight, runny nose can lead to undesirable consequences:

Prescribing treatment should be a doctor, he will choose drugs that are safe for the mother and child.

To prevent the development or exacerbations of allergic rhinitis, the following recommendations should be observed: