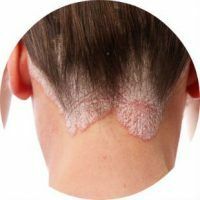 Seborrheic eczema or dermatitis is a skin disease that occurs due to a violation of the functions of the sebaceous glands. The disease can appear in every person regardless of sex and age. Uzelkopodobnye rashes most often focus on the head, face, flexion and in the navel.

Several factors that influence the appearance of seborrheic eczema:

There are also known irritants that contribute to the appearance of this disease, for example, the use of certain detergents, cleaning agents, powders. It happens that the cause of seborrheic dermatitis are food products, in particular - confectionery products, for the preparation of which chemical dyes and additives are used.

In 60% of cases, tests taken from the affected area show the presence of streptococcal and fungal infections. However, the results of the studies confirmed that infection in this disease is a secondary condition that appears against the background of a decrease in the barrier functions of the skin. Eczema-damaged cells can not withstand the invasion of pathogens, so this disease is considered infectious, but not infectious, it is not transmitted to a healthy person when in contact with a patient with seborrheic dermatitis.

The development of eczema is characterized by the appearance on the body of small nodules that have a pinkish-yellow hue. Gradually, they increase, they combine, forming thus diskoid plaques covered with dense fat scales. When one of these scales is separated from the skin, a moist but non-clogging surface is visible.

The affected sites do not have a definite shape, but are clearly delineated from the areas of healthy skin. In the first stages of the disease the foci of eczema are dry, eventually become "greasy".Gradually discoid plaques take the form of rings or arches.

The started seborrheic dermatitis of the scalp gradually falls on the eyebrows, nasolabial folds. When the skin of the eyelids is damaged, the patient develops blepharitis, characterized by severe swelling and redness. Later scales and cracks near the external side of the eyes are formed. They can accompany conjunctivitis, so in the morning it can be difficult for a patient to open eyelids. Lesions on the occiput extend to the neck and ears, forming an eczematous helmet.

On the smooth skin, characteristic eruptions can be observed in the area of ​​the scapula, navel, axillae, on the folds of the limbs. Foci of defeat have uneven edges, they are located above the level of the skin, grow rapidly. As a result, cracks appear on the arms and legs, and the skin becomes red and swollen.

Read also about the symptoms and treatment of other species of the specimen http://woman-l.ru/kak-lechit-razlichnye-vidy-ekzem-u-vzroslyx-i-detej/
to the table of contents ^

The main process of treating seborrheic dermatitisis aimed at normalizing the functions of bodies and systems, eliminating violations that led to its development. Given the recurrent nature of the disease and the degree of severity, the doctor can prescribe both systemic and local treatment.

For the period of therapy, you should refuse to visit sauna, bath, less to be in a room with hot air, high humidity. Also, during the treatment of seborrheic dermatitis, cosmetic shampoos should be replaced with special ones, which include selenium sulphide, salicylic acid, tar( Nizoral, Skin-cap, Sulsen, Algopix, Keto-plus, etc.).It is useful to wash your head and tar soap.

With minimal skin lesions at the initial stage, special treatment is not required, it is enough for the patient to normalize the nutrition, the state of the nervous system or to exclude contact with harmful substances, allergens.


In severe cases, medication is prescribed, which includes:

Treatment of seborrheic eczema of the head should be carried out under the supervision of the attending physician, who,need to supplement or change the appointment.

With the advanced forms of seborrheic dermatitis, in combination with drug treatment, physiotherapy is used. Effective physiotherapeutic methods that help to relieve the course of the disease are magnetotherapy, mesotherapy, darsonval, cryomassage, cryotherapy, laser therapy.

Seborrhea is a complex disease that occurs with various disorders of the body's metabolic functions, because diet and proper nutrition can greatly alleviate already existing symptoms and prevent them in the future.


To reduce the secretion of the sebaceous glands, it is necessary to completely eliminate fried, fatty, spicy, spicy and smoked dishes from the diet. Also, one should refrain from drinking alcoholic beverages.

Seborrheic dermatitis of the head, especially in chronic form, greatly weakens the immune system and, in order to restore immunity and prevent the occurrence of allergic reactions, it is necessary to observe a special diet, removing from the diet:

All food should be cooked for a couple, bake or simmer. Depending on the height and weight per day, drink from 1.5 to 2 liters of still water. Also allowed to drink low-fat kefir and loose tea. With concomitant diseases of the kidneys, digestive tract, nervous or endocrine system, the attending physician will give additional recommendations on dietary nutrition.

The mechanism of the appearance of seborrheic dermatitis in children is the same as in adults. Various allergens can become a cause of aggravation of the disease: chemical substances, tissues, medicines, poison of insects, metals, infectious agents, etc. However, most often the disease in children is weakened by the weakening of the immune system.

If you have eczema from the baby's diet, you need to remove foods that cause allergic reactions. Medication for seborrheic dermatitis includes the use of internal and external antihistamines, sedatives and vitamins.

Children's seborrheic dermatitis in newborns most often occurs in the first 3 months of life and in most cases completely passes after a while, without causing discomfort. The signs of eczema in infants are the appearance of yellowish-brown crusts, which eventually begin to peel off and easily separate from the skin of the baby. Such lesions are often called milk crusts or gneiss.

To quickly get rid of milk crusts, doctors recommend applying a baby shampoo or oil on your head and then using a soft brush to remove scales from skin and hair.

If the cause of seborrheic dermatitis has become heredity, the large skin folds of the body, the interscapular area and the folds of limbs begin to be involved in the process, rashes may appear behind the ears and in the auricles, under the diaper and underarms. In this case, the baby must be taken to a doctor who, depending on the age and weight, will prescribe a comprehensive treatment, including:

If seborrheic dermatitis has affected not only the scalp, but also some areas of the body, it is recommended to use baths with herbs or the addition of sea salt. For the preparation of herbal decoction, it is necessary to mix 1 spoonful of chamomile, string and burdock. Ingredients pour 1 liter of boiling water and leave for 30 minutes. After this, strain and add to the bath with water.