There just pancakes not bake skillful hostess on Shrove Tuesday:from wheat and rye flour, from corn and pea, rice, oatmeal. A traditional delicacy, which from time immemorial in Russia was respected and served as a real decoration of the table, were buckwheat pancakes.

Today they are considered almost a delicacy and cook quite rarely. On the one hand, this is due to the fact that buckwheat flour is not always on the shelf in the store you will find, but you do not need to grind cereals yourself in a coffee grinder. And on the other hand, pancakes made from buckwheat flour for some reason do not work for every cook. But if you keep all the cooking technology, then the pancakes will turn out to be famous: lush, soft, with holes.

instagram viewer
Delicious buckwheat pancakes must certainly be cooked for Shrovetide, when you get tired of ordinary wheat. They can be served as with a salted filling, mushroom, fish or meat, and with sweet, for example, with fruit or jam.

Traditional buckwheat pancakes are prepared with milk with the addition of yeast. In this case, they are obtained not only soft, but also "spongy", lush.

In Russia they were served more often with salty stuffing, for example, sour cream and mushroom sauce, or not stuffed at all, and laid out before the guests a high hill of pancakes and gave everyone the opportunity to choose independently than to flavor the dish: caviar, cottage cheese, salted fish.

Finished pancakes from the top is best lubricated with butter, and served separately from the filling. They are best combined with caviar, sour cream, and salted mushrooms. If the filling is sweet, then in advance it is better to add more sugar in the dough.

How to cook buckwheat pancakes - video

Advice! Fry buckwheat pancakes is best in a pan with non-stick coating, without lubricating it with butter, and the last add to the spoon in the dough as it decreases, but in no case stirring. If a cast-iron frying pan is used, it must necessarily be thick-bottomed, and the oil should not be poured on it, but spread thinly with a silicone brush. And that the pancakes were not brittle, when frying from the first side, it is best to cover the pan with a lid.

Buckwheat pancakes on the water can be eaten during the Shrovetide week, and after it, when the Great Lent comes, because they are made without eggs or milk. They are no less delicious, delicate, crunchy. It will take a long time to cook, more precisely, it is better to prepare everything from the evening, and to fry the pancakes in the morning.

Serve these pancakes with tea, without forgetting honey and jam.

Pancakes with buckwheat can be prepared if you have only cereals at hand, and you could not find the flour. Immediately it is worth saying that they taste almost the same, but they need a blender to make them.

Dishes from buckwheat are characteristic not only for Russian cuisine. For example, the inhabitants of the French province of Brittany, too, do not mind eating it, but they do not cook porridge, but use buckwheat flour and bake pancakes or crepes from it, as they are called in France. 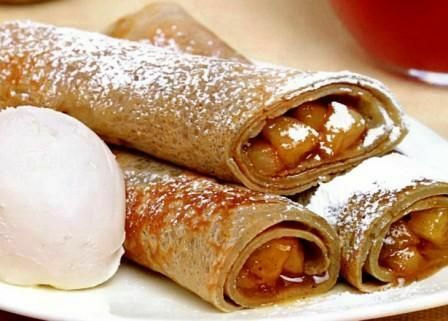 The recipe for French pancakes from buckwheat flour is quite simple, and the dish is suitable for breakfast as well as for a hearty snack throughout the day. Prepare these pancakes as sweet, for example, with apples or pears, and with meat or egg additives.

The filling for such pancakes can be prepared from pears, plums or by mixing these and other types of fruits. A great addition to the dessert will be a ball of cream ice cream or chocolate glaze.

Pancakes with baking - this is in itself a full and satisfying dish, and as a filling, the most commonly used are the high-calorie ingredients: eggs, vegetable mixes, minced meat, mushrooms. Buckwheat pancakes with mushroom bake are a typical dish of classic Russian cuisine. You can cook them both with forest mushrooms( whites, honey agarics, boletus), and with mushrooms.

Pancakes with cottage cheese are loved by adults and children, still, it's a delicious dessert. And if you add fresh berries or fruit to the filling, you will just get delicious. Dough for such pancakes from buckwheat flour is best done with yogurt, then even without the addition of yeast they will turn out lush and soft.

Ready dessert can be decorated with powdered sugar, pour with melted chocolate, lay on top a few leaves of fresh mint. 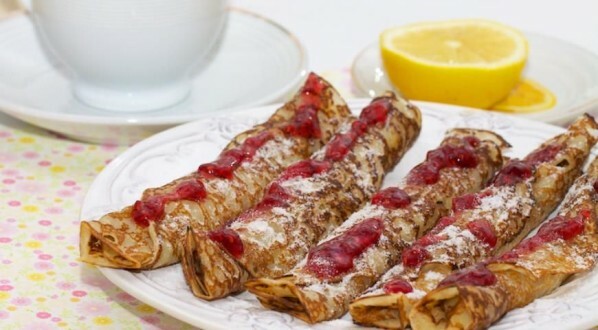 As they say, the devil is not so terrible as he is painted, so buckwheat pancakes are not so demanding at the cooking process as it seems. If you use the appropriate recipe, then your loved ones can enjoy this traditional old delicacy. Sweet or meat, lean or fatty - buckwheat pancakes will all be to taste, especially in Shrovetide. Related Videos: 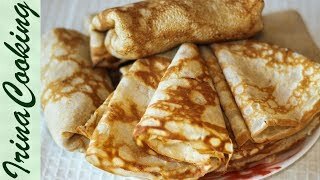 .How to cook thin pancakes from buckwheat flour 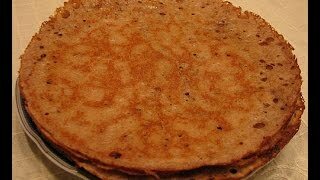 9:19
Recipe for pancakes for weight loss. Eat and Thin