The main causes and symptoms of sudden loss of consciousness 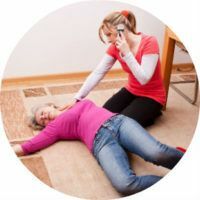 Sudden loss of consciousness( from the Greek word "syncope", which means chopping off) is an alarming symptom that should not be ignored, because it can indicate serious illnesses or a general decline in strength. Sharp deterioration of state of health, darkening in the eyes, vomiting - this is the clear signals of the body that requires help.

The main cause of dizziness and loss of consciousness is an acute shortage of oxygen in the cerebral cortex caused by a decreased blood flow. The following factors can lead to this phenomenon:


The age-related features of the body also affect:

The loss of consciousness is almost always preceded by a period of so-called precursors. People who periodically experience such a malaise, can accurately recognize the signs of faintness:

During fainting, the body is motionless, all muscles are relaxed. It can even become a reason for urinating when you lose consciousness. The pulse is superficial, rare and poorly palpable. This condition can last from 3 to 5 minutes.

After a person gradually comes to, but feels completely shattered. The faint itself and the last seconds preceding it are usually not remembered in memory.

If the person's behavior indicates the approach of an attack, the following actions should be performed:

With these measures, a person will feel better and will come to consciousness for a few minutes. But if they do not bring results, we need to move on to more serious actions.

Temporary malaise does not always pose a threat to life, but frequent loss of consciousness necessarily causes and sometimes quite serious. They can be caused by pathological processes taking place in the body and require obligatory consultation, and, possibly, further treatment with a cardiologist, neurologist and therapist.