How to prepare and what the blood test for sugar says 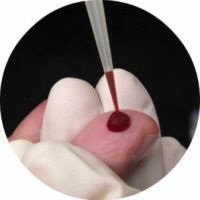 Sugar( glucose) plays an important role in the human body, providing it with the energy necessary for the functioning of all organs and tissues. Increase or decrease in the level of this carbohydrate in the blood speaks about serious diseases, many of which at the initial stages are asymptomatic. Control the amount of sugar in the blood helps the tests, they can be done in the laboratory or at home.

Glucose enters the body with food in complex carbohydrates, which are cleaved during digestion to simple components and secreted into the blood. After eating, the blood sugar level rises, which increases the secretion of the hormone of the insulin pancreas. The hormone promotes the absorption of glucose by cells, reducing its concentration in the blood to normal values.

However, cells use only part of the sugar that has entered the body. The main amount of this substance accumulates in the liver in the form of glycogen, from which it is expended under physical or emotional stresses. Insulin is also responsible for the synthesis of glycogen.

Reducing the level of sugar in the blood triggers the production of another hormone of the pancreas - glucagon. It enhances the breakdown of glycogen in the liver and promotes the release of glucose from the depot. A similar action is possessed by the hormone adrenal adrenaline.

Also, the increase in the level of sugar at its low values ​​or sudden needs provides:

Sympathetic nervous system, which is activated when stress requires increased energy consumption. The effect of the parasympathetic system, on the contrary, reduces blood sugar, which is most noticeable at night or in the early morning.

The sugar level is measured in the morning, on an empty stomach. At the same time, the capillary blood is taken from the finger. For venous blood, the permissible values ​​are slightly higher. In case of doubtful result, a check after loading with glucose is carried out - an oral glucose tolerance test. Also, to clarify the diagnosis, it is possible to conduct an analysis for glycated hemoglobin. In this case, the norms for women and men are the same, but in childhood and in pregnancy, deviations are possible.

In fasting, the interpretation of glucose in capillary blood is as follows:

The level of glycated hemoglobin in the total amount of sugar:

At an early age, a physiological tendency to decrease the concentration of sugar in the blood is observed.

Rates for children after loading with glucose also differ from adults in the smaller side. Diabetes mellitus is diagnosed at a value of 7.7 millimoles per 1 liter of blood and higher.

In the study of venous blood in children taken on an empty stomach, the values ​​up to 5.6 millimoles are considered normal.

The sugar levels for pregnant women are the same as for other adults. However, because of the reorganization of the body in some women, insulin resistance is observed - a decrease in the reaction of tissues to insulin. In this case, the development of so-called gestational diabetes mellitus is possible. Diagnosis of the disorder is usually in the middle of pregnancy - from 4 to 8 months, the concentration of glucose exceeds 6.1 millimoles per liter of blood for fasting and 7.8 millimoles after loading with glucose.

Hyperglycemia of pregnant women usually occurs asymptomatically and passes after childbirth. However, in the absence of compensatory therapy, this condition affects the development of the fetus and can lead to severe pathologies.

Also about 50% of women who have had gestational diabetes become ill with type 2 diabetes for 15 years after childbirth.

Various diseases can cause the increase and decrease of blood sugar level:

It is observed in the following cases:

It is a persistent increase in blood sugar level caused byInsulin deficiency in the body.

The main causes of its occurrence are serious pancreatic diseases:

Diabetes also occurs due to diseases accompanied by increased secretion of counterinsulant hormones that block the work of insulin, reduce its production and promote rapid disintegration:


Read also what fruits can be consumed in diabetes mellitus http://woman-l.ru/kakie-frukty-mozhno-est-pri-saxarnom-diabete/
to table of contents ^

Also, the growth of blood glucose may beThe following states are provoked:

The most severe complications of high sugar are coma, which develop gradually, but often lead to death.

The reasons for the reduction in blood sugar are:

Among the incorrect actions:

Also hypoglycemia is possible in the following conditions:

From energy starvation caused by low glucose, the brain cells are primarily affected.

The main symptoms are sweating, nausea, hunger, anxiety, inability to concentrate. Prolonged hypoglycemia can lead to loss of orientation in space and inadequate behavior. Absence of therapy leads to hypoglycemic coma.

The glucose level is never stable, even in a healthy person. Many factors influence its change and, in order to obtain reliable data, it is necessary to adhere to certain rules:

If the analysis is performed after a meal, between the intake of food and blood sampling should take at least 1-1.5 hours - during this time the food is absorbed and the sugar enters the blood.

For the test at home, using the meter, there are also rules:

The following methods are used to determine blood sugar level:

Applied for questionable results of the main tests:

To correct the level of sugar in the blood helps the use of certain products.

To reduce glucose, a low-carbohydrate diet should be followed:

The low glucose diet depends on the causes of the disorder and the stability of this condition. With reactive hypoglycemia, when the fall of sugar is caused by a feeling of hunger, a sweet drink, a spoon of honey or jam will help. The improvement is noticeable after only 10-15 minutes, at this time it is desirable to take more complex carbohydrates - to eat an apple or a piece of bread.

For special cases when a prolonged drop in glucose is observed, special dietary rules are developed:

If the blood sugar levels deviate from the norm, it is important to know the causes of the abnormalities, first of all the therapy will be aimed at their elimination:

If the cause of the violation can not be eliminated, as well as in primary diabetes mellitus, compensatory treatment is prescribed, which may include:

In the case of a coma, emergency medical attention is required.