Benefits and harms of soybeans 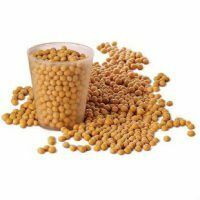 Today soybean is called "queen of food industry", as it is added to many products - semi-finished products, sausages, baby food, confectionery. On the label of the product, soybean is labeled with the index E 479. Scientists are still arguing about the beneficial properties and negative effects of soy on the human body.

Soya is recognized as a true "protein champion" among plant products. Soy protein is quickly absorbed and has a unique amino acid composition. The nutritional value of soy protein is the equivalent of the value of fish, milk, meat or eggs proteins.

A characteristic of soy is the low content of carbohydrates in its composition, which are represented in the form of fructose, glucose, sucrose, starch, pectin substances.

B vitamins, as well as vitamins D, A and E, are concentrated in soy. Soy is also saturated with macroelements and minerals: sodium, sulfur, magnesium, copper, molybdenum, iron and other important compounds for the human body.

The use of soybeans due to its unique biochemical composition positively influences the basic processes of the vital activity of the human body. If you regularly include dishes with soybeans on the menu, the risk of obesity and cardiovascular disease decreases. Soy is rich in phytoestrogens, therefore it increases the duration of the menstrual cycle in women, weakens the hot flashes after the onset of menopause and prevents the development of osteoporosis.

Soya beans are characterized by anti-inflammatory and antipyretic properties. They are used to increase the immune responses of the body and prevent colds.

Particularly valuable for a person is soy milk and foods that are cooked on its basis. It is recommended to use soy milk with:

Milk from soya can be included in the menu of children, which are characterized by allergic reactions to protein of animal origin.

Scientists have experimentally proven that soy reduces the susceptibility of the body to radiation. For the first time, this property was noticed after the Hiroshima nuclear attack. From the radiation impact, people who used soya paste - miso, were not harmed.

Soy products are recognized as effective means of preventing diabetes. They activate the pancreas and promote the production of insulin. Soy also reduces the risk of developing cancer in humans by 33%.

What is harmful to

Despite the many useful properties of soy, many nutritionists and doctors have subjected this product to devastating criticism. Excessive consumption of soy can cause a human pathology of the endocrine system, premature aging, as well as disrupt the cerebral circulation. Oxalic acid, which is contained in soy, promotes the active development of urolithiasis.

It is also not recommended for children to eat a lot of soy products because of isoflavones, which slow the process of puberty in boys and accelerate the onset of menstrual cycles in girls. Contraindicated in soy products for children under three years of age and future mothers.

Nutritionists are confident that the moderate consumption of soy beans is absolutely safe and harmless for healthy people. If you are not a vegetarian, then you can eat soy with a balanced diet up to four times a week. Vegetarians are advised to include in the daily menu up to two portions of soy or soy products.


It is important that soy be a natural and high quality product, not genetically modified.

Soybeans grown in a contaminated area can damage the body. Soybeans tend to absorb toxic compounds from the soil. Acquire soy from well-known manufacturers whose products are subject to strict quality control.