I often dream that I spread my wings and fly. .. After such dreams my own hands seem to me rude and clumsy. But in real life without hands. .. like without hands! Hands can not only be sewed.write, peel potatoes, play the piano. They can even walk, if suddenly tired of the traditional way of movement. And yet, depending on the mood, the hands can be squeezed into fists, pulled at the seams, or be broken in a gesture of despair. In short, the human hand is a miracle. Especially female.

If time were favorable to Venus of Milo and preserved her hands, many of us, having lost the opportunity to "stitch" the ancient Greek beauty at our discretion, would transfer her from the goddess to the rank of an ordinary stone statue. This is the opinion of some art critics. With him, you can argue, but the question of the beauty of women's hands is still open.
It is on the hands of Muslim women, peeping out from under the veil, judging the beauty of their possessor. During Catherine II, the girl was considered beautiful, provided that her shoulders, elbows and palms were like buns.

And in the Middle Ages, an undeveloped, half-childish breast, narrow shoulders and thin to the bony hands were cultivated. 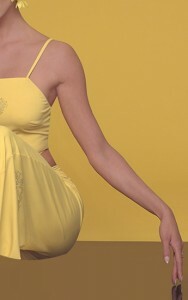 The hand of a modern woman should be, rather, athletic, even a hint of convexity in the forearm area is allowed.
In fashion, a long brush and long fingers( the brush is considered long if the size of the middle finger is equal to the length of the palm).Short fingers will visually become longer, if the varnish does not cover the entire surface of the nail, but only the central one. The same effect can be achieved with the help of a ring with an oblong but not massive stone.

However, whatever the shape of the female hand and what conditions dictate the fashion, the main connoisseur of female beauty at all times remains a man. And if he claims that there is nothing better than your short, but so tender fingers, you will have to believe it.

In ancient times, rich noblewomen kept servants for putting on shoes and opening doors. Exclusively in order not to damage the skin of the hands. So they kept their hands young and beautiful.

Modern surgical cosmetology is looking for more and more ways to rejuvenate the skin of the hands, but until now there remains the problem of post-operative scars, which deform the skin. In order not to risk, or reduce the risk to a minimum, you must first become familiar with the existing methods of skin rejuvenation. Whether it is mechanical grinding, chemical peeling, laser abrasion or microdermabrasion - it's up to you and your beautician, dear ladies.

And if you want to preserve the youth and beauty of your hands, you can follow the tips given below. Many people think that any nourishing cream is suitable for daily nutrition and moisturizing the skin of the hands. Creams, which include liposomes are able to act like gloves - they should be used before washing, washing dishes and any other "wet" work at home.
Weekly 15-minute saline baths( 1 tablespoon of sea salt per half-liter of water) will prevent brittle nails.

Before bedtime, grease your hands with warm vegetable oil, put on cotton gloves. Do not forget to lubricate with oil or cream the rough skin on the elbows.

Here is an old mask recipe, thanks to which the hands of our grandmothers were smooth and tender: put on half an hour a mixture of one raw egg yolk, a tablespoon of honey and one teaspoon of oatmeal.
And your hands will say to you: "Thank you"! 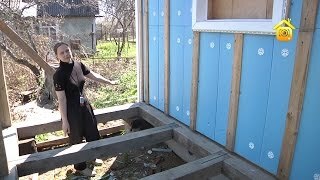 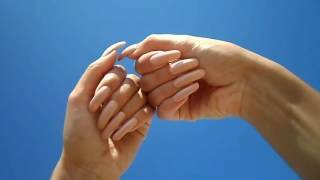 10:38
kreolla's long nails and sand on the beach(BEAUTIFUL WOMEN'S HANDS WITH LONG NAILS)