Tablets from motion sickness in transport for children and adults 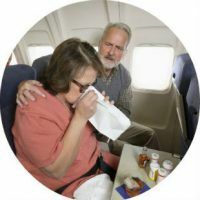 A trip by train, ship, bus or plane is always a fun and exciting journey, both for adults and for children. That's just a lot of people in the transport of swaying, and unpleasant sensations of nausea spoil the whole impression of wandering. Despair should not be, with this problem will help to cope with special pills against motion sickness.

Several bodies are responsible for the balance of our body in space. These are receptors located in the tendon-muscle apparatus, a snail in the inner ear and a visual apparatus.

When a person travels by train, plane, car or boat, his body moves from side to side. The amplitude of the displacement is quite small, but this is enough to make the snail in the inner ear "notice" such oscillations. Eyes see - nothing changes. Here there is dissonance, and the receptors of the muscles, skin and mucous membrane of the digestive tract react inadequately, showing symptoms of motion sickness.

There are other cases: the body is stationary, and the eyes notice through the window that the person is moving. It also provokes motion sickness, known to many as "sea sickness".In medicine, this phenomenon is called kinetosis or motion sickness.

The main thing - do not confuse kinetosis with usual drowsiness! If in transport you just wanted to sleep because of the fact that the picture in the window is the same and your eyes are tired, this does not mean that you are sick. Most likely, this is usual fatigue.

To think about taking money from motion sickness, it is necessary, when appears:

In this case, all these symptoms in people suffering from kinetosis, can arise as when traveling on any type of transport, and on a swing, escalator or attractions, looking down from a great height.

For the prevention and treatment of motion sickness in transport, most often use antihistamines and anticholinergics. Mechanisms of action of drugs are based on the suppression of histamine receptors and cholinergic receptors in the central nervous system that block the normal work of the vestibular apparatus.

The antiemetic effect of many drugs is based on blocking the emetic center located in the medulla oblongata, as well as on relaxing the smooth muscles of the gastrointestinal tract, reducing peristalsis and slowing down the processes in the salivary glands.

Some pill components stimulate the central nervous system, affect the spinal cord or brain, stimulate the production of adrenaline or influence the semicircular canals of the middle ear, which are associated with maintaining balance and orientation of the body's position in space.

Thus it is not necessary to hope for the correct choice of medication without first consulting a doctor, since most of them have their limitations and a number of side effects. This can be: drowsiness, dizziness, attention deficit, dry mouth, sweating, etc.

Homoeopathic drugs or tablets containing natural ingredients( eg ginger) are considered more sparing and harmless. They can be used even for infants, children and pregnant women.

Homeopathic tablets for resorption. Have a complex vegetotrophic action, that is, reduce and stabilize the vestibular and vegetative disorders that occur in any moving transport. Take it to 1 tab.both for elimination and prevention of motion sickness. The first reception of the drug is best done an hour before the movement. If a person develops vomiting, you can take 1 tab.every 30 minutes, but not more than 5 per day. There are no contraindications, except for individual sensitivity to the components of the drug. It can be used for children from 3 years old and pregnant. to the table of contents ^

Helps to cope with nausea, vomiting and headache while traveling by any transport. Take it 30 minutes before the trip, if the symptoms do not pass, then you can take another dose in 6 hours. If the medicine was not taken before the movement, then the very first symptoms of kinetosis should take 2 tablets at once. Contraindications include only increased intraocular pressure, after the use of "Aeron" may appear side effects: severe thirst or dryness in the throat and mouth.

Read also how to treat genyantritis at home with folk remedies http://woman-l.ru/kak-effektivno-vylechit-narodnymi-sredstvami-gajmorit/
to table of contents ^

Chewing agent that has an antiemetic and antihistamine effect whentrips on various types of transport. The duration of exposure to the receptors is 24 hours. This remedy can not be used for children under 12 years old, as well as for those who suffer from closed-angle glaucoma, prostatic hyperplasia and pregnant women. Accept it for 1 pc.before or while driving. After application, dry mouth, blurred vision and increased excitability may occur.

Homeopathic tablets against motion sickness, which quickly stop dizziness. Accepted for 1 pc.3 times a day. With sudden and acute attacks of dizziness, you can drink 1 every pill every 15 minutes( no more than 2 hours in a row).In the form of droplets dissolved in a small amount of water, can be administered to children and infants from the first months of life. Pregnancy and lactation are not contraindications to use.


Due to the lack of clinical trials, it is recommended to use with caution in pregnancy and lactation, children under 18 years of age, those who have lactase deficiency or lactose intolerance, as well as glucose-galactose malabsorption. Possible side effects, allergic reactions.

Well warns and cures dizziness, nausea and other vestibular disorders that appear when moving on any vehicle. The action takes about 15 minutes.after taking, and the curative effect lasts from 3 to 6 hours.

Contraindicated in pregnancy, breastfeeding and in children under 1 year of age. Categorically prohibited reception for epilepsy, convulsive syndrome, acute exudative and vesicular dermatosis. People suffering from angle-closure glaucoma, bronchial asthma and cardiovascular disease should consult their doctor before use.
to table of contents ^

Quickly eliminate the symptoms of seasickness. Thanks to natural ingredients can be taken by children and pregnant women, if there is no individual intolerance to ginger. Adults should take 1 g of dry powder or 1 tab.for 15-45 minutes before the trip, if necessary, re-reception after 3-4 hours. Children on the road more suitable ginger caramels, cookies or gingerbread.

Combined pills against motion sickness in transport, which have antiemetic and moderate sedative effect. Take 1 tab.minutes before the start of the movement or every 3 hours during the journey.


It is forbidden to take children under 2 years old, pregnant, lactating, patients with closed-angle glaucoma, prostatic hyperplasia. Side effects: retardation, lowering blood pressure or tachycardia, dry mouth, constipation, indigestion. It is not recommended to take people whose activities require a fast motor or mental reaction.

Homeopathic tablets for resorption. Stabilize the autonomic nervous system, suppress vomiting, do not cause drowsiness. Take 2 tab.3 times a day on the eve of the trip and directly on the day of travel. Like all homeopathic preparations, it is recommended to take it half an hour before a meal or 2 hours after. For medical purposes, resorb 2 tab.every 1-2 hours until the condition improves, but not more than 10 per day.

It is allowed to use for children from 3 years old, during pregnancy is taken according to the doctor's prescription, has no contraindications except for individual intolerance of the individual components of the drug.

Anti-vomiting tablets with antiemetic effect, mild sedative and antihistamine effect. According to the instruction, adults and children over 14 years of age are prescribed 1-2 tablets.half an hour before the start of the trip, with plenty of water, if necessary, repeated administration of the drug is allowed after 3-5 hours. Children from 7 to 14 years give 1 tab.for 30 minutes.before the trip.

Side effects of the drug are manifested, as a rule, with an overdose and are expressed in drowsiness, rapid fatigue, dizziness, thirst, heart rhythm disturbance, allergic reactions. Tablets are strictly prohibited in the first trimester of pregnancy and during breastfeeding. In the second and third trimester, it is possible to use the drug according to the indications.

Quickly relieves dizziness caused by dysfunction of the vestibular apparatus. Assigned to 1-2 tab.for 1 hour before the trip or at the appearance of the first signs of motion sickness. When the onset of pronounced signs of kinetosis( vomiting, dizziness), phenibut is ineffective.

Contraindicated for children under 8 years of age, pregnant, women during lactation, with liver failure, peptic ulcer, should not be combined with alcohol intake.

It is almost impossible to radically dispose of kinetosis from pregnant women during long trips, but you can significantly reduce the unpleasant sensations by thinking ahead about the necessary measures. In this case, the pills from motion sickness should not only be effective, but also as harmless as possible for the mother herself and for the baby.

It is advisable that the appointment is made by a doctor, after collecting the necessary tests. Most often, homeopathic remedies are used: Avia-sea, Vertigochel, Kokkulin. They well relieve dizziness, nausea, stimulate the vestibular apparatus. A good effect is ginger powder or ginger caramels, you can make a road of light ginger or black tea with lemon. This remedy in no way can harm a pregnant woman or a fetus.

Young children are most susceptible to motion sickness in transport because they have not fully developed the vestibular apparatus. Over time, the situation is equalized, but in some children exposure to kinetosis persists to 10, and sometimes up to 14-16 years. In view of this common problem, manufacturers have developed a number of tablets from motion sickness and nausea especially for children of different ages:

How to ease your condition

For a better effect of taking antinuketotic drugs 1-2 times before the trip it is necessary to eat a little, preferably carbohydrate food, but not fat. After eating antiemetics, you should not eat. If children strongly want to eat, then you can give them a stomach-wrapping meal, such as oatmeal porridge, yogurt.

Remember that if you gave the medicine to a small child, when it started to rock, then you need to put it to sleep. Retardation and clumsiness are some of the most common side effects that occur in children, so they'd better get some sleep.