Shrovetide: games for all ages outdoors and indoors

The long-awaited Shrovetide for a whole week pleases us with delicious pancakes and pancakes, folk festivals and fervent mood. All have already become bored by the lavish celebration after the long past New Year days. And now a string of games and fun for Shrovetide gives us fun and carelessness. Farewell to winter can be accompanied by countless pleasures, in which now we will understand.

The original Slavic, pagan festival Maslenitsa existed from those ancient times when one-storey carved houses covered the ground, ruddy women walked in beautiful flower headscarves, and men - in embroidered shirts, the day started with the call of early cocks.

The colorful culture of the ancient Slavs is full of mysteries, mysticism and folk wisdom. Ability to have fun with scope and generosity is an important feature of the people. After all, only after a good rest, you can count on excellent performance in the future, and this is a pledge of rich harvests and all kinds of abundance. Therefore, the Slavs did not restrict themselves either in food, or in entertainment during the Shrove Tuesday. 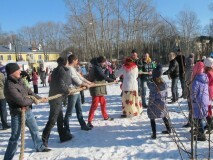 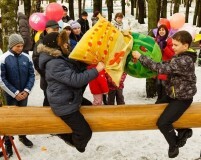 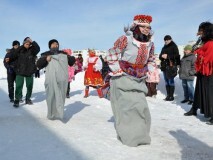 And who spent this time stingy and boring, he, according to legends, the whole next year was not particularly lucky.

So, what were the winter fun of our ancestors:

Many of the current games for Shrovetide migrated from the past. Men and women wear traditional folk clothes, musicians get the accordion, bells and whistles. Songs, dances, competitions and fun fill the city. The warm days of many are lured to the street, and the home-bese-friends call friends and relatives on a home holiday, where it is also easy to arrange thematic rivals.

It's good to have a presenter who knows about all sorts of games and relay races. He says the foreword about the holiday, its history, and then begins the fun:

Being in the premises, contests are chosen less mobile. For example, "Funny Tambourine" is a game when the children sitting at a table pass each other's children's tambourine, while a scribble is pronounced in chorus like: "Roll the merry tambourine in hand. Whom he remains, he will sing, dance us! ".The loser needs to dance and sing, entertaining the company.

Street competitions are usually arranged for strength and agility, often are ritualistic. For example, for tug of war, two teams are given the names "Winter" and "Spring".Gladly, if "Spring" wins, then you can continue the celebration.

Other sports games for Shrovetide can be as follows:

Sweetheads will like the contest for the speed of eating pancakes or pancakes. Mistresses can compete in the quantity and variety of cooked pancakes.

Here are some interesting contests for Maslenitsa:

Games for Pancake week in kindergarten

Children adore the merry week of Maslenitsa. To create a festive mood for them, kindergarten teachers organize special contests with gifts:

The game begins with a stream. The children are invited to split in pairs and stand in a row. Children, holding hands, raise them up. The last pair begins to run in the formed corridor under the clasped hands and becomes in front. 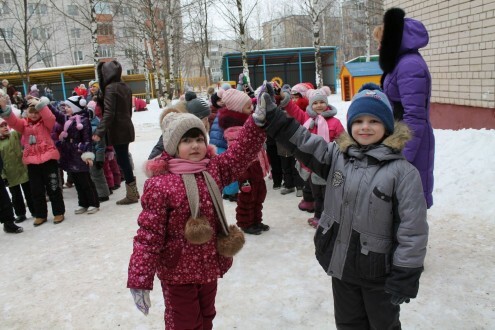 After each couple runs a trickle, they all sing the song "Burn, clear!".And then the first couple is running up, and the driver must catch one person. If the children managed to escape to the end of the row and again join hands, the guide continues to catch the next pair. And if one participant was caught, then the lead goes with him to the end of the stream. The lost couple becomes driving.

For the game you need to prepare a satin bright ribbon. Children form a large circle and hide their hands behind their backs. The leader passes through the dance, holding a ribbon or a bright handkerchief and singing a song about the dawn. He melts a verse, he stops and leaves a bright ribbon on his shoulder next to a standing member and runs away. 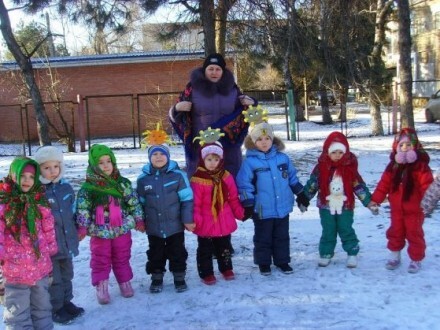 who stayed with the tape, you need to run in the opposite direction to take your place faster than driving.

Having managed to take the abandoned place, the participant remains in the dance, and if the lead is the lead, the loser plays the role of "Dawn" now.

If you're lucky enough to catch a lot of snow on Shrovetide, you can play this exciting fun. Children are divided into teams, and each molds out of the snow their combat fortifications and snow shells. At the signal of an adult, children are attacked with snowballs by enemy fortresses. The team, whose fortress collapses first, loses.

In this mobile game, not only accuracy is necessary, but also caution.

For safety reasons, before the start, the teacher declares the rule: it is impossible to throw snow into the face of other children, otherwise you will have to leave the team.

For the children preparing "swords": inflated balls in the form of sticks. Thus, the guys fun and safe play in the fight. 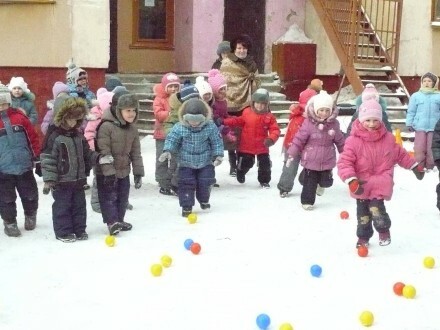 , you need to prepare a large number of artificial flowers or colored balls for the street. Children are divided into two teams. The choir sings merry verses about the spring, while the guide spreads flowers along the snow. As soon as the song ceases, the guys rush to collect flowers. The team that wins the largest bouquet or more balls wins.

Children of primary school age will be happy and kindergarten games. You can also choose Shrovetide fun that suits all ages.

Invented such games for schoolchildren to carnival:

The most ancient Shrovetide game can be organized for children. To make it even more fun, instead of the usual rope take a rubber hose.

The teacher divides the children into two equal teams using the counters. On the snow, a bright line is drawn with the help of paints. The judge gives the signal with a whistle, and the tug of war begins. The guys can stand in an unusual way - back to the line, so it would be more interesting. The group of children behind the line loses. 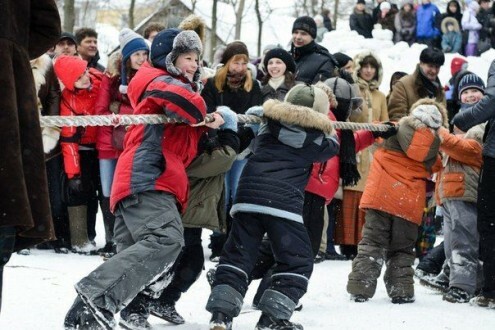 In the Shrovetide week, it was a tradition to roll a burning wheel off the hill. Whose wheel travels further, that fate promises great luck.

For schoolchildren, the fun is somewhat different. A number of pins are placed on the site. Two wooden wheels are taken, which are given to two teams of schoolchildren. The guys become one after another, and in turn they roll the wheel between the pins. The relay race ends when the first team of participants rolls and returns to the wheel. 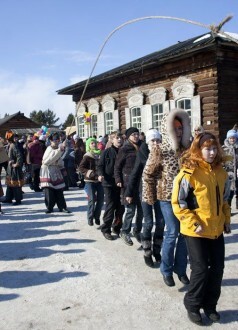 Take the same rope or a long, strong rope. Two adults( or the guys themselves, if they are strong enough) begin to twist this skipping rope. The rest run and jump over it.

The reader notices who has jumped the rope more times, and announces the prize.

This fun is accompanied by songs and ditties, you can specifically include a tape recorder.

For children, a slide is prepared in advance: it is leveled and filled with water for the night, bows are formed.

On a not so high hill from the snow one student is taken and proclaimed king of the mountain. The rest of the kids are trying to get to the top to get rid of the self-proclaimed and take his place. An amusing and active struggle must be safe: it is forbidden to fight and rudely jostle. Previously, students are given the task to learn the poem "King of the Hill" by the author E. Uspensky.

At school in the literature class, you can ask to write your own poem, in which the presence of these words is necessary: ​​carnival, spring, pancake, sun, winter.
Who will compose the best work, he will receive a prize or a few excellent grades.

Adults can organize a cooking lesson for schoolchildren, as learning to cook delicious pancakes and pancakes is very exciting. Who made the most beautiful and delicious pancake will get an incentive prize, and the rest of the participants - also mandatory sweet gifts.

Maslenitsa is always bright and joyful, on the street or at home, it warms and unites the hearts of people. From the kindergarten and the school, it is necessary to plant this good tradition of celebration with the help of games and gifts. 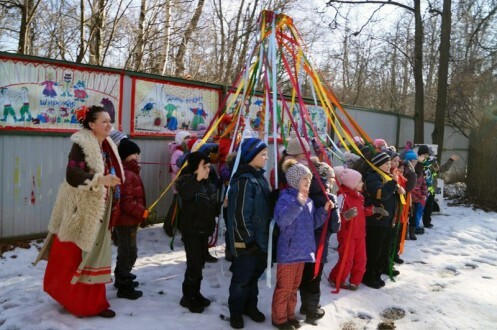 Once the richest festival of the Slavs and now is not forgotten, because the fun of carnival and all sorts of competitions awake in people's minds fantasies of old times, when everyone still loved to have fun and enjoy the onset of the blooming spring. 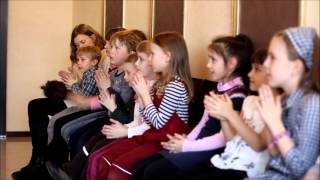 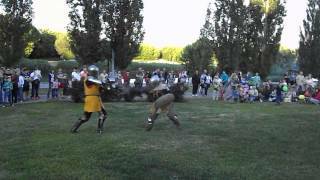