Kalatea is a flower that is distinguished by brightness and elegance. It belongs to a decorative-foliar group. But for some reason among lovers of indoor floriculture calatea has not won much popularity. And it can be explained by the fact that this plant has many whims. Although too capricious it is difficult to call it - there are representatives of the flora, which are more demanding. The main thing is not to leave kalatheia without thoughtful care and attentive attitude.

Kalatea has one of the most significant features - large and at the same time thin leaves. From their surface there is a strong evaporation of moisture. Because of this feature, Kalatea suffers mainly in the room growing. After all, in natural conditions - tropical forests - due to high humidity, excessive transpiration is prevented. But in a dry atmosphere of houses, this process occurs with a high intensity, so the root systems do not have time to absorb the amount of liquid the plant needs.

Kalatea originates from the tropics of South America. Exceptions are only those varieties that breeders recently withdrew. In their homeland, these plants prefer to grow near streams and rivers, since they are suitable for high humidity.

By the way, those who saw kalateyu in the rainforest argue that it is not nearly as attractive as we used to see it in shops or at home. After all, in nature it can reach a height of several meters, hitting its gigantic dimensions. In addition, kalatea in natural conditions has many dry and damaged leaves. They suffer from various unfavorable external factors.

The local population uses huge leaves of kalatei as a natural roof covering. Some varieties are used for medicinal purposes. Also in the homeland of kalatei, or rather from a powerful rhizome weave baskets. It is this fact that can explain the name of this exotic plant. After all, the word "basket" in Greek sounds like "kalatos".

There is a huge number of species and varieties of this exquisite tropical beauty. Most of them have gorgeous leaves, and some will be able to surprise their owner with delicious colors( kafedeya saffron).

It will be very difficult to list all varieties. It is worth mentioning that those that are most resistant to cultivation at home. For example, Macaia's kalatea is very common today among the florists. She has wonderful oval leaves that adorn bright strips. And their back side has a dark purple color. Bright coloring of large leaves gave kalatei of this variety another name - a peacock tree.

Very stable kolateea round-leaved. But other species are already more capricious. To the most capricious are the varieties with the most delicate leaves. It is the kebatea zebrina, which has velvety striped leaves.

Certain varieties derived recently. These include the Kalatea Mosaic, which appeared only in 2005 thanks to the efforts of Adrian Decker. It is known for its wonderful leaves with a dark green grid. It is often used in phytodesign, as Mosaic leaves are very well preserved. This variety is not too cranky.

Kalatea Medallion is another popular variety that has large variegated leaves and has a distinctive pattern. Kalateia medallion care is not specific. It is looked after as well as other types of kalatei.

An unusual and beautiful plant is also korateya krokata, which blooms up to 3 months, but after that, thanks to the spectacular dark foliage, it retains its decorative appearance for a long time.

The plant does not tolerate direct sunlight. Therefore it is better to put kalateju on the western or east window. But even in the dark this representative of the flora will not grow well. It is quite possible to illuminate the fluorescent lamps. In this case, the vase can be placed in the back of the room, if you envisage refreshing for 12-14 hours. Only the lamp should be installed at a height of approximately 20 cm above the kalatei.

Be especially careful with this part of kalatei care. For the plant, the lack of moisture is extremely harmful, since large leaves take a lot of liquid. Often it is from this that kalathea suffers. The tips of the leaves dry, which means you have deprived your kalathea with water. But excessive watering is also undesirable for this exotic. The ideal solution to this problem will be a properly selected light soil substrate, which will eliminate moisture stagnation. And it is better to water kalateju when the soil is almost completely dry out.
Fertilizing fertilizers. Enough to feed the plant 1 time in 2 weeks. Suitable solution of fertilizers. Dose: half of the recommended dose. Do not allow only excess salts. But organic fertilizers will be very useful for kalatei.

To create optimal conditions, any methods of air humidification are suitable: a wet rag on the battery, a vessel with water near the pot, a tray with wet claydite, etc. But the ideal solution is an air humidifier.

Kalatea belongs to heat-loving plants. For it, the temperature drops and drafts are dangerous. Therefore, in summer it is good at + 22-24, and in winter - at + 18-20.

Kalatea does not need to be transplanted too often. But young plants need to be moved to a more spacious pot every year. In doing so, try not to destroy the earth fellow. But adult kalatee enough "to look for a new home" every 2-4 years.

Due to too dry air in the winter season, the leaves of the kalatei can dry very quickly. But that the plant became more hardy, then it is recommended to re-grow it. To do this, a small piece of rhizome with leaves is cut with a sharp knife. The cut is processed with a powder of cinnamon or coal. The process is planted in a small pot with a light substrate, set on diffused light and sprayed intensely. When a month later the plant begins to grow, it must be transplanted into a larger pot. For kalatei, the main danger is caused by a spider mite, mealybug, scutellum and whitefly. 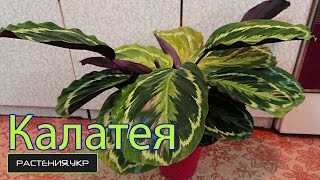 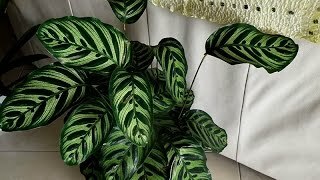 10:05
Kalatea from the family of maranthocks. Rules of care at home 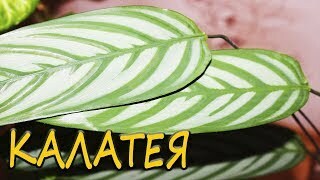 3:04
Kalatea - the conditions of home maintenance.